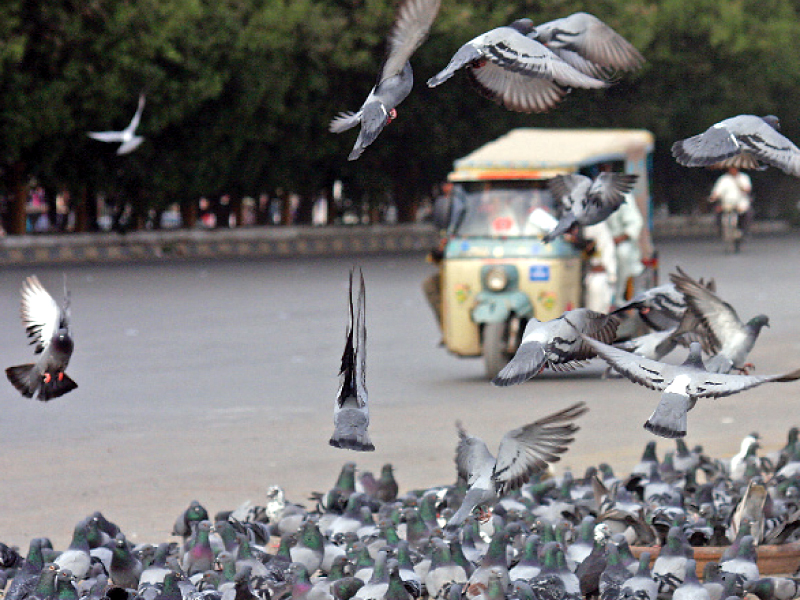 Experts consider it as harmful for the ecosystem and also detrimental to human health when pigeons who have found abode at Lahore’s shrines, await their daily feed courtesy of the shrines’ visitors.

It is a common sight in old Lahore to witness flocks of pigeons dive to artfully catch the meat and grains thrown towards them; all in one swift motion and then perch in a quiet corner to gnaw at their food.

It is not just wild pigeons though, eagles and crows are fed as well either as charity or a hobby by the residents of Lahore and hundreds of birds perch at the buildings and houses on Mall Road, and also frequent the Ravi River Bridge, and Canal Road.

For some like Muhammad Ramzan, selling the birds’ feed to visitors at popular spots is their source of income. Ramzan, who sells grain outside the shrine of Hazrat Mian Mir in Lahore, said that he goes through one and a half-sack of grains daily. Ramzan’s customers like feeding the birds millet, lentils, and wheat.

“On Thursdays and Fridays, the visitors at the shrine increase ten-fold. In these two days, I sell double the usual amount of grain,” he said. Others, however, if their pockets permit, prefer buying meat to throw to the birds.

While residents of the city have noble reasons to feed birds, wildlife ecologist Dr Waseem Ahmad Khan, states that by making the birds dependent on humans for food we harm their ecosystem.

“We have made a vigorous bird like the wild pigeon soft and delicate by making it rely on us instead of hunting like other birds,” Khan explained, “they are meant to eat insects and other things nature provides them rather than being fed out of our hands.”

However, being hand fed has repercussions for humans as well, as per Khan. “By feeding them meat, the feces of these birds, especially wild birds, becomes extremely harmful to human health,” the ecologist informed, “as their feces are very acidic.”

Keeping this in mind, Punjab Wildlife and district administration are taking action against sellers of meat to eagles. However, there is no law for wild pigeons being fed at different intersections along the roadsides of Lahore.

Khan, sees this lack of law as problematic and going into the details about birds’ fecal matter being harmful, said that when it dries up, the feces particles are added to the air and cause various diseases in human beings like asthma and other respiratory illnesses. “The people who keep pigeons in their homes also suffer from similar diseases.”