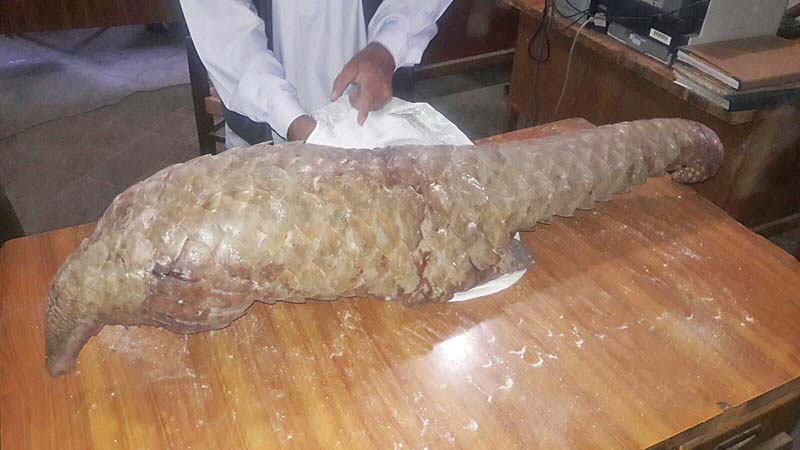 Pangolins are threatened with extinction, and are the most trafficked animal in the world.

Experts have urged the government to start a massive public awareness campaign to protect the endangered pangolins in the Margalla Hills National Park (MHNP) from poaching and human attacks, which are jeopardising the animal’s survival in the natural habitat.

The scaly anteater, and the most trafficked mammal in the world, serves a crucial role in protecting forest trees from termites.

The MHNP homes some 38 mammals, 27 reptiles and over 600 plant species, Islamabad Wildlife Management Board (IWMB) Manager Operations Sakhwat Ali said, adding that the habitat of the endangered harmless anteater is under threat from poaching, hunting and human conflicts.

Sakhawat said the IWMB officials had confiscated around six pangolins from poachers and released them in the wild.

Pakistan Wildlife Foundation (PWF) Vice Chairman Safwan Ahmed said that there were eight species of pangolin, four each in Asia and Africa, and it was not found anywhere else in the world. “All species of Pangolins are endangered. The Chinese pangolin is near extinction or critically endangered,” he highlighted.

The PWF survey in 2019 regrettably found no species of pangolins in their based habitats in Karak and DI Khan despite a thorough search.

Safwan said that in Islamabad, he frequently witnessed pangolins twice a year and also received phone calls from volunteers in F-7, F-8 and G-9 sectors to report their presence. He added that they were mainly residing in these sectors due to nullahs and old vegetation suitable for their survival.

“Over 99 per cent of people do not dare to touch a pangolin due to its scary appearance with the perception that it may harm their life, which is completely wrong as it’s a very innocent animal,” he said.

The official said that the Indian pangolin species was found throughout the country except for Gilgit-Baltistan.

Safwan mentioned that the scales of pangolin were used by the mammal for its defense, while it eats termites and ants as part of its diet.

In the past two decades, he said, pangolins were over hunted globally for Traditional Chinese Medicine (TCM) for medicinal purposes.

Pangolin’s soup was consumed by the Chinese elite as a cure to many diseases, but it was not proven scientifically.

Initially, the gypsies used to poach and sell it for Rs20,000 to smugglers who used to sell it internationally for Rs 400,000. Now, the animal is sold for as much as Rs 2 million.

He regretted that the regional bodies established to stop pangolin poaching mainly have unfortunately failed to achieve their goal.

Commenting on the ecological role of pangolins in the environment, he said Pothohar forests were predominantly of Acacia Modesta or Phulai trees that were ill due to the presence of termites and absence of pangolins.