Driving alone in his truck, Nicholas Ibanez prowls the tiny American island of Guam in uniform, carrying a most-wanted list of dangerous predators that must be taken off the streets.

He starts early, before 8 a.m. — up and out with coffee in hand. Lately, he also emerges after dark, to avoid the vigilantes who would impede his work. On the road, he scans the edge of forests for shady patches to set his traps. In a box sits his bait: bits of chicken from a local Jamaican restaurant, a strip from KFC, maybe a Vienna sausage.

Mr. Ibanez, 41, is the Guam government’s only dogcatcher. And no matter how many hours he works, no matter how elusive he is at the animal control office, he faces an inescapable reality: On this island, there’s just one Nicholas Ibanez, and at least 30,000 stray dogs.

“There’s way too many issues and animals — there’s always something waiting,” said Mr. Ibanez, who has held the job for more than five years. “It can be dangerous. I’ve never been bitten, and I don’t want to get bit.”

Across Guam, which is home to about 170,000 people, packs of these “boonie dogs,” as they are known, can be seen everywhere — crossing highways and chasing cars, roving the parking lots of luxury hotels, lounging in cul-de-sacs fringed with coconut trees. 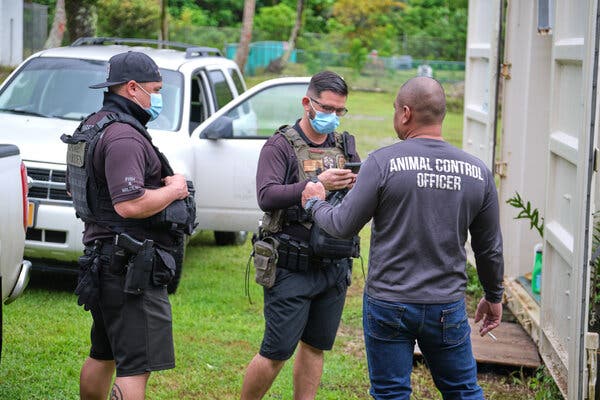 On social media, residents frequently post stories and photos of dangerous encounters, like one that left a tuxedo cat with bloodied eyes and a ring of red around its neck, and another in which a feral stray climbed three stories of an apartment building to attack a pet.

In the animal control office, Mr. Ibanez looked through photos of pet dogs with bloodied legs and one that showed a stray baring its teeth at a toddler as she stood on her doorstep.

“I can say like 80 percent are vicious,” he said. “We get hospital reports about stray dogs biting kids, even elderly people.”

“Back in the day,” he continued, “I used to be able to walk to the bus stop without getting chased.”

The island has struggled with stray dogs for decades. In 1967, during a rabies outbreak, the American military tried to shoot the strays. But the dogs proved so smart and elusive that the authorities eventually resorted to planting poison, said Cyrus Luhr, president of the board of directors at Guam Animals in Need, an animal shelter.

Now, Guam, which covers about 200 square miles, has about one stray dog for every six residents — a ratio that looks to some like a pile of dynamite. 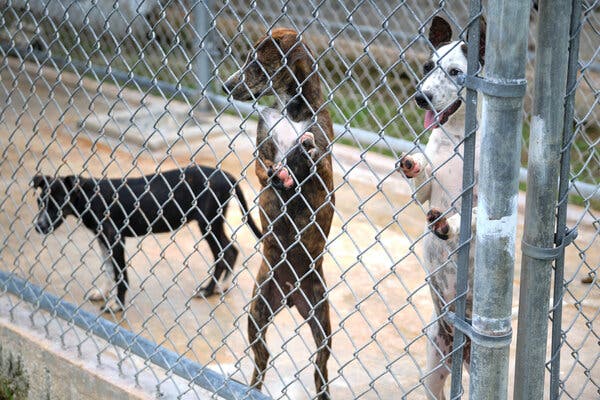 “Rabies is a very real threat to us,” said Alison Hadley, executive director of the shelter, which is the only one on the island that receives government funding. “We have boats that come in from other places in the world, and there have been very real rabies scares. There are just so many possibilities.”

This summer, a video that went viral got the whole island talking about the problem with strays — and inflamed passions over what to do.

The video showed a pack of about 50 large dogs flocking to an abandoned building near the airport. It caught the attention of the island’s mayors, animal rights groups and concerned parents, catapulting the issue onto front pages and fueling heated public meetings for months.

The debate has at times gone to extremes: Some have called for permits that allow hunters to shoot the strays, while others want them left alone entirely. When captured, the dogs are brought to the shelter, where they are put up for adoption, or euthanized if they are beyond medical help.

“There are people that hate them, there are people that — you see it on the news, they shoot or poison them — and there’s people out there who are like, ‘OK, let’s make a schedule for feeding groups of strays,’” said Julie Cunningham, a nurse whose pet cat was nearly mauled to death by three dogs in early 2021.

The island’s divisions have crept into Mr. Ibanez’s daily work, forcing him to go on capture missions in the dark of night to avoid the small number of animal rights activists who have taken to heckling him and scaring away the strays.

“I never had problems until recently,” he said. “People take out their video and get in my face.”

He added: “In those moments, I’m shaking. I’m not a bad person — I don’t call the shots. And I try not to bring that stress home.”

While Guam has long contended with stray dogs, it has never done so with so few resources.

The animal control division lost many staff members in the early 2000s, when the Guam government moved the division to the Department of Agriculture. In late 2020, Mr. Ibanez became the only officer in the field, after his last counterpart retired.

“In Guam, everything is underfunded,” Mr. Luhr, of the animal shelter, said. “That has been the history.”

“The job is very difficult,” he continued. “It has taken a toll on prior animal control officers, and you see it. It’s this relentless flow of emergencies.” 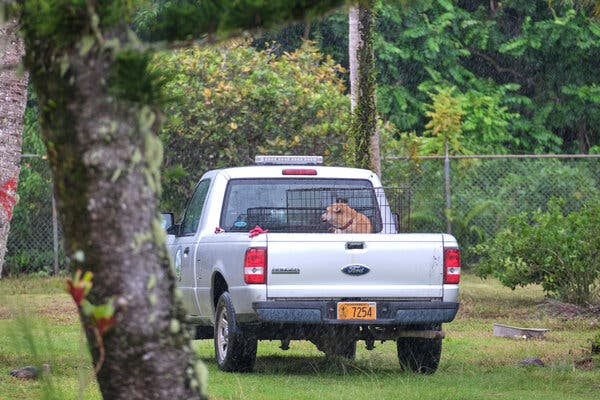 The animal control division has been looking to hire more officers, and since the video of the airport dogs went viral, the Guam government has passed legislation to increase the shelter’s annual funding to $600,000 from $150,000.

Those closest to the issue say that free or low-cost spaying and neutering programs are the best long-term solution, though the island chronically struggles with a shortage of veterinarians and a lack of education about sterilizing pets.

“I want a little bit more of everything,” said Chelsa Muna-Brecht, director of the Guam Department of Agriculture. “It would take at least two to three years with proper staffing and support of the island before we could really turn this around.”

As public debate rages on, Mr. Ibanez mostly keeps to himself, making his way through routine dog captures, animal abuse investigations and visits to areas known for vicious strays. He ignores any angry social media posts about him, he said, and tries to decompress by spending evenings with his wife.