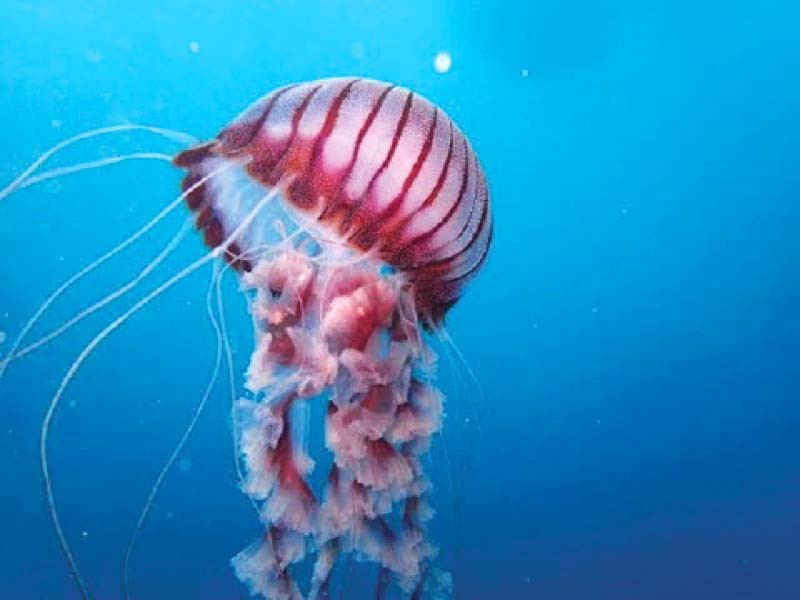 A jellyfish swims in the coastal waters of Pakistan. Wildlife experts have called for research on reasons behind rising population of the specie.

World Jellyfish Day, being observed on Nov 3 all over the world including Pakistan, is meant to promote research on one of the most ancient surviving creatures on the planet.

These aquatic creatures, found in the ocean, though a vital part of the ecosystem, can be deadly and life-threatening to humans.

In the creek areas of Indus and in the coastal areas of Jiwani, Gwadar and Kalmat Khor, existence of more than 15 to 20 species of jellyfish have been reported. The fishing industry has come to a halt many times because of this aquatic creature that gets entangled in the nets. Research is urgently needed in view of the growing numbers of jellyfish in Pakistani waters.

Jellyfish are a part of the natural environment that is found in the sea. However, the factors have not been determined yet as to why the number of jellyfish suddenly rises to such an extent that they form blooms in the ocean and a large part of the ocean is filled with them.

According to Muhammad Moazzam Khan, technical advisor to the WWF (Pakistan), around 15 to 20 species of jellyfish are found in Pakistan. “Tentacles of some jellyfish release poison that can kill humans. However, some kinds only cause temporary pain which later vanishes,” he said, adding that the large number of jellyfish in the ocean is an indication that this extraordinary increase is due to climate change.

“Never before have we seen such a large number appearing in the sea. Jellyfish blooms have been reported about 16 times in a short period in Pakistan,” he claimed.

According to Moazzam Khan, the number of jellyfish increased during a period from 2003 to 2004 that completely stopped fishing activity for a year and also for six months in 2018. This number was so high that besides Pakistan, the jellyfish had spread to Iran, India, Oman and even Yemen.

Jellyfish, found in the Indus River Creek Area, Kalmat Khor, Pasni, Jiwani and Gwadar in Balochistan, are treated with salt and alum and exported to China.

The purpose of celebrating World Jellyfish Day is that educational and other research organisations need to work on it to find out the reasons of the rise of this aquatic creature that appears in the form of torment in the world because it also causes a lot of damage. Not only does the fishing stops, but the power plants are also shut down.

Another benefit of this research in Pakistan is that it can show that if the demand for jellyfish in the world increases in the Indian Ocean, then a management plan can be made for its export.

According to Moazzam Khan, jellyfish are the last part of the food chain found in the sea, which is not usually eaten by other aquatic creatures, but some species of turtles eat jellyfish. This situation is also a reflection of the fact that when fish are caught on a large scale, only jellyfish are left, which is destructive to the fishing industry.

There are about 400 to 500 species of jellyfish in the world, which can range from a pinhole to 100 times larger than a human. There is also the impression that the world’s largest aquatic creature is jellyfish. Some jellyfish found in Pakistan can even weigh up to 55kg.