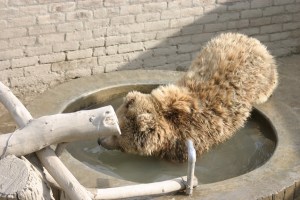 On Nov 7, 2021, the Islamabad High Court has imposed a ban on the import of rare breeds of animals.

The court has declared that depriving animals of their natural habitat merely for the entertainment of human beings violates fundamental rights. The FBR should ensure that no animals are imported against Animal Act 2012 till the next hearing, said the court.

The Court declared that human survival on the planet depends on the co-existence of animals and the preservation of their natural surroundings. The deputy director wildlife did not deny that rare animals were imported by citizens in the past, which implies that animals have been imported during the past years in violation of Animal Act 2012.

The court sought a report on import policy regarding rare animal species from the Ministry of Climate Change and Chairman FBR.

The court has also directed the Ministry of Climate Change to furnish the notifications for the establishment of a Management and Scientific Authority under Animal Act 2012.

The court said that if these authorities have not been set up yet, they should be set up within 30 days. Further hearing of the case was held on November 19 on which date the Court ordered the Ministry of Climate Change to make the requisite amendment in the import policy as per international agreements. The Court said that it was giving a last opportunity to the ministry to formulate an amended import policy.

The representative of the ministry adopted the stance that it was the commerce ministry’s responsibility to amend the law, and prayed the court to issue instructions in this regard. To this, the chief justice remarked whether the lawyer wanted this court to run the affairs of government, adding that this was not the court’s job. The court responsibility was to just interpret the law, he added.

The chief justice said the import policy should have been amended in light of Animal Act 2012 and international agreements.

He asked whether the responsibility of the Ministry of Climate Change was just to plant trees.

The court extended its stay order against the import of rare species for three weeks and adjourned the case.