Tom will lay his head in the lap of anyone who sits down to rub his neck, while Tilda prefers just to nuzzle her young son. Cuddles aren’t really Chaya’s thing, but if she’s in the mood, she’ll play pugnaciously with a bale of hay as if it’s a giant ball.

On any other farm, these three friends would no longer be alive. Tom was too small, Tilda too ill and Chaya too aggressive to survive on a modern industrial farm. Each was condemned to the slaughterhouse.

Instead, the trio found their way to Hof Butenland, an ex-dairy farm turned animal retirement home that offers sanctuary to cattle, pigs, a few horses, chickens, geese and rescue dogs.

No animal is there to serve a human need; all coexist as equals with Hof Butenland’s human residents and workers.

“We need to think about how we can live differently and we need to leave animals in peace,” said Karin Mück. She and her partner Jan Gerdes, both in their mid-60s, run Hof Butenland on the windswept flatlands of Germany’s Butjadingen Peninsula, which juts into the North Sea.

The idea of shifting away from meat and dairy products may sound revolutionary in a country better known for juicy bratwurst and Frisbee-sized schnitzel, along with afternoon indulgences of coffee topped with frothy milk and cheesecake.

But Germans are consuming less meat — last year only 126 pounds per person, the lowest amount since 1989 — while the number of vegans has steadily increased to two million.

Increasingly, even Germans who eat meat are purchasing vegan products as concerns over how livestock is kept are encouraging people to turn away from animal products, said Ulrich Hamm, a professor of agricultural sciences at Kassel University, who has studied trends in food consumption for decades.

For the humans at Hof Butenland, the turn away from animals as commodities is not only a question of human morality but of planetary survival, given the role that industrial farms play in contributing greenhouse gases to the atmosphere.

“For me it is clear, if we want to save this planet, then we have to stop using and consuming animals,” Mr. Gerdes said over coffee, with a splash of oat milk. “We have the economic power to enact change, but we have to want it.”

Mr. Gerdes took over Butenland from his father and introduced organic practices to the region in the 1980s. But even on an organic farm, he could not avoid what he called the “brutality” of how dairy cows are treated to produce milk: removing newly born calves from their mothers, who for years are inseminated again and again.

His discomfort with the process — and decades spent listening to calves cry out for their mothers — ultimately led Mr. Gerdes to quit the dairy business and adopt a policy of total egalitarianism for all the species calling the farm home.

Now, the animals are free to roam from the red brick barns built in 1841, down the tree-lined lane to the nearly 100 acres of grass-rich pasture and back again, at their own pace and on their own time. There are no milking hours to be met and the pigs, buried deep in a pile of straw, regularly sleep long past noon. 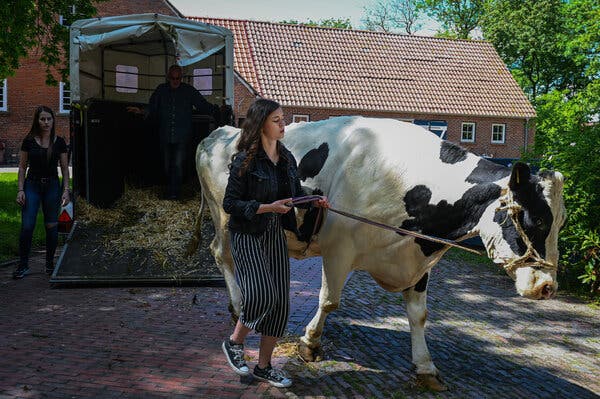 One of the pigs is Frederick, whose stall opens onto a shady yard with a muddy pond that he and three other swine friends share with the geese. He was found after tumbling from a trailer packed with piglets bound to become suckling pigs. The driver, contacted by police, scoffed at the idea of turning back for one lost animal, so he was brought instead to Hof Butenland.

Now he snores snout-on-snout with Rosa-Mariechen, rescued seven years earlier from the corner of a feedlot, suffering from pneumonia and infected wounds from rat bites. Their stall mates, Eberhard and his son, Winfried, were rescued from a university research lab where experiments left them nearly deaf and blind.

Lab animals have a special place in the heart of Ms. Mück, who spent weeks in solitary confinement in 1985 on suspicion of building a terrorist group, after she was caught breaking into a lab to free animals being used for experiments. Alone in her cell, she had a revelation.

“One day I realized, it is the same thing that happens to the animals,” she said. “You don’t see the sun, you are separated from your friends, you have no idea what is going on around you and you have no control over your own life.”

After 20 years working as a psychiatric nurse, she met Mr. Gerdes just as he was preparing to quit farming and sell off Hof Butenland, including his herd. But when a trailer came to collect the cattle, a dozen didn’t fit.

Mr. Gerdes turned them back out to pasture and decided to leave them there, undisturbed, for good. The sanctuary was born.

To finance their undertaking, the pair initially rented out vacation apartments. Many guests wanted to donate to help support the animals, leading Mr. Gerdes and Ms. Mück to set up the Hof Butenland foundation that now serves as the financial backbone for their operations. 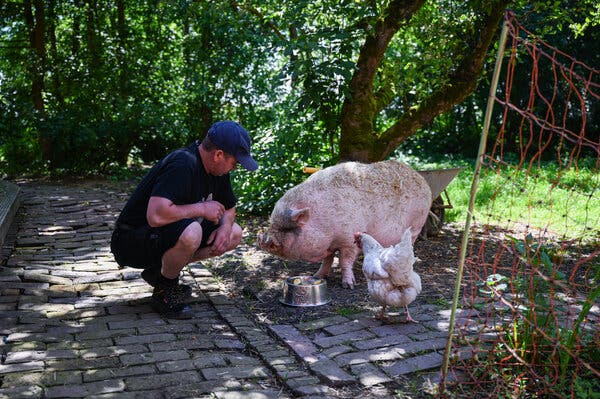 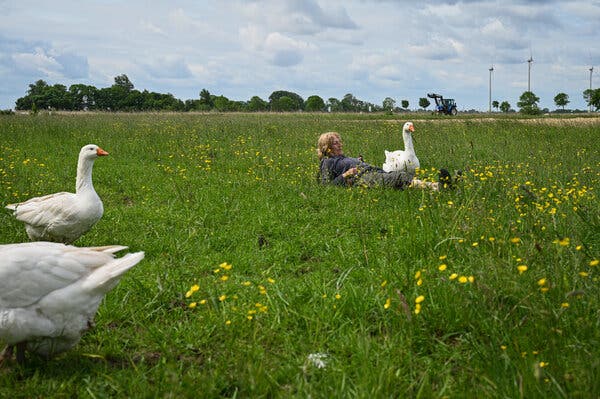 Social media channels are filled with videos of Chaya playing, other cows dozing in the sun and Hope, the gander (originally believed to be a goose), picking through Ms. Mück’s pockets. These clips have drawn a loyal fan base of donors, and the funds are enough to cover monthly vet bills, two workers and overhead costs. Electricity is generated on-site from a 1980s-era wind turbine.

Packages arrive at random, addressed to a cow, or to Omic, a Pekingese mix recently rescued from Romania. They hold feed bowls, treats and handwritten notes in envelopes that often include a 20-euro bill. Sponsors can sign up for group tours held twice a month, but uninvited visitors usually don’t get past the gate.

“We are called a retirement home for cows,” Ms. Mück said. “You don’t show up at a nursing home to pet the grandmas, why would it be any different here?”

A neighbor, Henning Hedden, 60, is a second-generation farmer who now rents his land to a young man running a conventional dairy with 90 cows. He has come to accept the Hof Butenland project and regularly stops by for a coffee and a chat, although he insists: “I’m still going to eat meat.”

Many neighbors who maintain working dairies argue their cows are healthy, well-treated and still able to meet the country’s still enormous demand for dairy.

Some also view the farm’s philosophy as a threat to their livelihoods.

“If we just cuddled the cows, it would be OK,” said Ms. Mück. “But what the other farmers don’t like is that we criticize the system.”

Each week, dozens of people telephone, asking the sanctuary to rescue a farm animal. But the waiting list is long.

Kristina Berning, 21, didn’t know this seven years ago, when she gathered her courage and called to ask if they would let her bring Ellie, a cow from her father’s dairy farm she was trying to save from slaughter. Initially, Ms. Mück refused — they didn’t have room — but the girl’s love for Ellie wore her down. 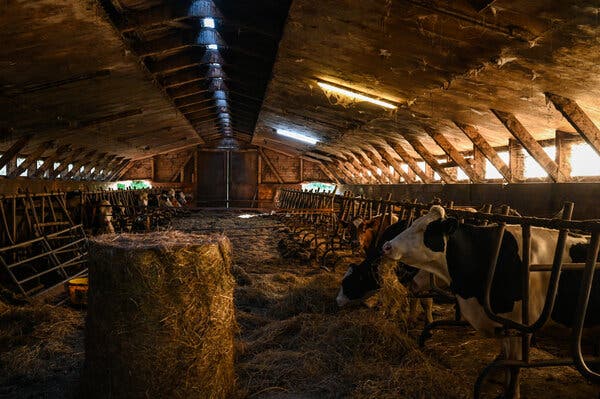 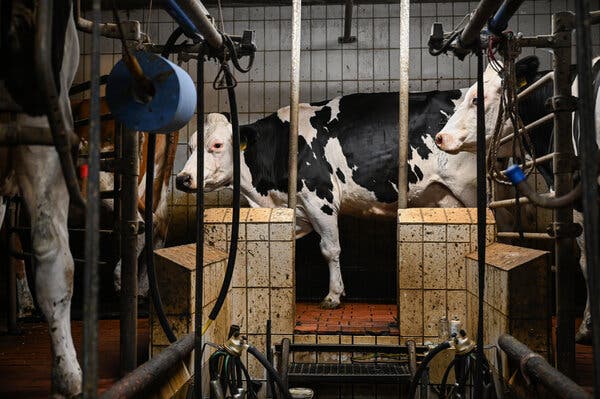 In June, Kristina and her sisters drove Lily, another cow who had become a family pet, five hours north to Hof Butenland. Ms. Berning burst into tears when Lily bounded out of the trailer and began rubbing her back on a grooming brush in the barn.

But tears of joy turned to tears of sadness two days later when Ellie, 13, collapsed and had to be euthanized. Kristina spent the night in the pasture stroking the cow and saying her final goodbye.

“I’m just glad that I could be with her,” she said. “I think it was important, for both of us.”