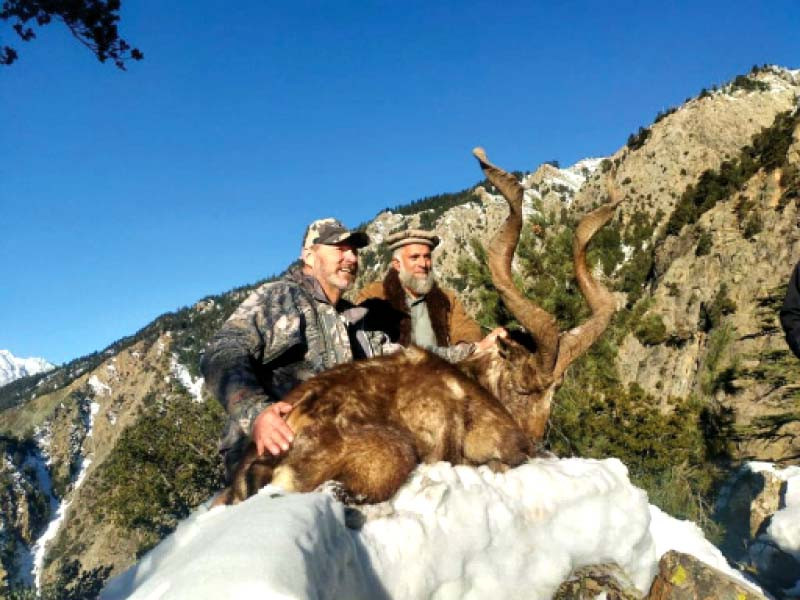 Two men pose for a photo after hunting a markhor in Upper Kohistan.

Since 2015, the Markhor has been on the red list of the International Union for the Conservation of Nature and Natural Resources (IUCN) as an endangered animal. In Pakistan’s context, located some 20 kilometres away from Komila, in the Upper Kohistan district, the local community in the Kaiga Valley has been protecting Markhors in the area for three decades.

Known as the Kaiga Conservation Community, it was formed by Malik Falkoz in 1990, which helped in efforts to save the goat-looking animal from extinction. After the ban on hunting of the Markhor, their population has seen an upsurge and the conservation area houses over 700 of them.

Besides human efforts, the geography of the Kaiga Valley itself guarantees protection for the Markhor because there are only two entry or exit points while the remaining area is a gorge, which gives no entry route. Kaiga is also unique, in the sense that it houses both the Kashmiri and Astore Markhor, which is not the case in other conservation areas as per Wildlife Department’s Sub-Divisional Officer, Katbaz.

Malik Falkoz said that people used to make fun of him when he set up the community nearly 30 years ago. He stated that there were no proper courses in the area until 2010 and the hunters had to travel across the gorge using ropes. “After getting the organization registered, I raised funds from different NGOs and the wildlife department to build pathways in the conservation area for hunters,” Falkoz informed.

Presently, in the Kaiga Valley, trophy hunting takes place once a year and only a single Markhor is allowed to be hunted down. Foreign hunters pay up to Rs 30 million for the hunt out of which some 20 percent goes to the government while the remaining portion goes to the self-sufficient local community – which operates a school and has installed a mini hydel power project which provides electricity to the village. For the rest of the year, over 20 guards remain on duty around the clock for the security of the Markhor in the conservation area, as per Muhammad Iqbal, who is Falkoz’s son.

As for the rules regarding trophy hunting, Iqbal informed that only one hunter is allowed in the area every year and is only allowed one additional shot if he misses the first one. “However, the hunter cannot fire at another Markhor if he has already injured one. For that to happen, he must first find the one he has shot, and then take his additional shot,” he said.

Katbaz stated that to ensure the rules were implemented, the wildlife officials are present along with locals during the trophy hunting. He said that if the rules are not followed a hunter can face imprisonment of five years or Rs 500,000 fine or both.

On the flip side, Katbaz lamented about the acute shortage of staff and equipment as a major hurdle in keeping the conservation area running smoothly. “We only have a five-member staff, including myself, and the department does not have a government vehicle so sometimes it is hard for us to reach the sites where a violation of wildlife-related crime is reported.” 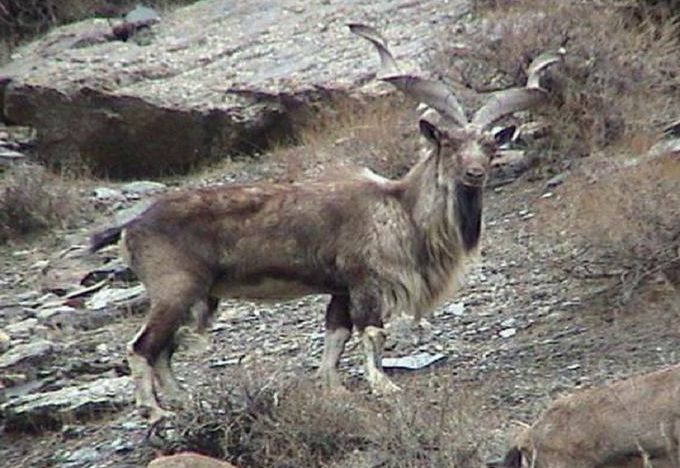 As opposed to this, Markhor population is said to be dwindling in Chitral. Only 800 animals have survived unchecked poaching. Nearly two-thirds of markhor population has disappeared in the Chitral Gol National Park in the past three years without inviting much attention from Wildlife Department of Khyber-Pakhtunkhwa.

The population of Markhors reached an all-time high at 2,868 in 2019 after which under the PTI government, the local watchers’ and staffers salaries were stopped and as a result there has been a dramatic decline in the population of the coveted animal most probably due to poaching with the help of Wildlife staff and local communities.

The Wildlife Department claims that the population has dropped to 2,000 animals but there is no scientific survey to determine the number of Markhor. Probably around a thousand had survived in the face of intense illegal and unchecked hunting.

Local communities claim that there is no ‘mysterious disease’ involved because they have not seen any dead body of Markhor indicating that poaching is the only possible reason.

In September 2021, a local politician Abdul Akbar Chitrali held a press conference at Chitral Press Club in which he claimed that the Markhor population has actually dropped to less than 800 animals and they were on the verge of complete extinction. He said that the Chief Conservator Wildlife and DFO Wildlife were responsible for the decline in the number of the animal which is a great loss of the district. He was accompanied by the chairman of Chitral Gol Community Development and Conservation and Parks Association and other members.

“This park is famous around the world for its population of Markhor, Chakur partridge and other flora and fauna and it has been declared a national park under Protected Area Management Project (PAMP),” he said, adding that around 23 watchers were recruited for the protection of this protected forest along with other staff but in 2016 the department stopped the salaries of the watchers and staffers and as a result the poachers have almost eliminated the entire population of this highly sought after animal.

“The responsibility should be fixed and Chief Conservators since 2016 should be made an example for others because due to their negligence the population has dropped to less than 800 animals. The department has issued wrong figures of 2,000 animals to cover the wholesale destruction of the animal in its native habitat,” he said, adding that funds should be released by the government for Parks Association and an independent survey should be conducted to ascertain the real numbers of markhor in the protected forests.

He blamed that due to the negligence of Chief Conservator, a beautiful park was deteriorating in condition with each passing day.

Meanwhile, auction for Markhor and Ibex trophy hunting in the game reserves of Khyber-Pakhtunkhwa continues. In Nov 2021, the highest bidder offered $160,250 for hunting an animal in the Chitral district. This was the highest amount offered since the start of the trophy hunting project in the province.

In total four permits for Markhor and one for Ibex were successfully auctioned.

Various registered outfittes from Pakistan including a Turkish lady participated in the bidding process. The highest bid was offered by M/S Mehran Safari at $160,250, equivalent of Rs 27,116,223 for a single Markhor to be hunted at Toshi-I, district Chitral.

The newspaper Express Tribune in an Oct 31, 2021 editorial stated that:

“The International Union for Conservation of Nature has declared the Markhor (mountain goat) an endangered species in view of its dwindling population in Pakistan. The strategy adopted by the government to save the species from extinction paid dividends, as the number of the animal in Chitral National Park which had declined to an alarmingly low level in 2004 increased to 2,868 — a record high — in 2019. However, as a result of mismanagement on the part of the government, the number of the endangered species has now dropped significantly. This situation is reportedly being attributed mainly to poaching. Lately, salaries of staffers of the wildlife department have reportedly become irregular and this is driving them to allow illegal hunting of markhors. Some members of local communities are also said to be involved in the racket.

The government introduced a hunting trophy scheme to prevent poaching of markhors in CNP. Foreigners are allowed to hunt the animal for hefty fees. This brought more than one million dollars to the government every year, and also created a sense of involvement in local communities, so they helped with anti-poaching efforts of the government. Eighty per cent of the income went to local communities and the rest 20% to the government. The 80% income generated through the hunting trophy scheme went to fund the setting up of handcrafts centres and to create other job opportunities in villages. The government also carried out welfare schemes in rural areas using this revenue.

Markhors are killed for their meat and for their use in preparing traditional medicines. They are hunted for food as one markhor gives around 110 kg meat and their skin fetches handsome prices. The animal’s long horns, which grow to 65 inches, are also valued. The government should revive its efforts to motivate the wildlife department staff and local communities for preservation of the threatened species. Besides the animal’s economic utility, protection of markhor is necessary to maintain biodiversity.”