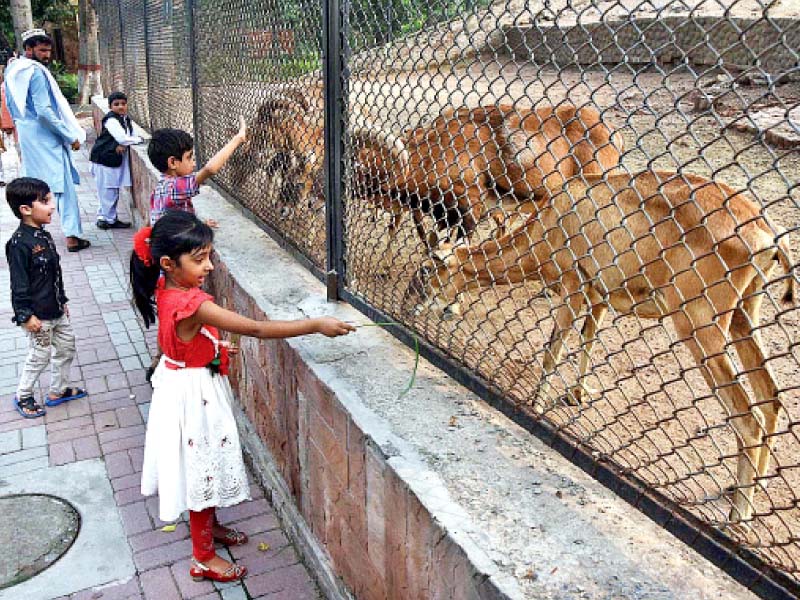 Children offering grass to herbivores in Lahore zoo. Government plans to micro-chip all the animals in provincial zoos and wildlife parks for their real-time monitoring.

Breeding of animals is a research driven process in zoos across the globe but it seems that the Lahore zoo has missed the memo on the need for research before animals can be paired together.

This absence of prior evidence on whether a pairing would be successful or not results in animal offspring that have disabilities, are weak, or die within a few months. This lack of research is common practice at the Lahore Zoo and has resulted in premature deaths of baby giraffes, rhinos, hippos, chimpanzees, elephants, and black jaguars.

Badar Munir, a member of the World Wildlife Foundation’s (WWF) Advisory Council, said that the world over rare and high-breed wild animals are bred based on research in zoos and breeding centers which is not the case in Pakistan. “This entire process is done with the help of research on DNA and the data is stored with a central authority. The central authority then selects pairs according to the genetic history of male and female animals, which results in healthy offspring,” Munir said.

He said that only a few basic things are taken into consideration for animal breeding in the country which include the age, health, and behavior of males and females towards each other.

“It is a process based on chance, sometimes we get lucky. For instance, in 2019, the United Arab Emirates (UAE) gave 18 lions as gifts to Pakistan, which included both males and females. These animals, when paired with pre-existing animals, gave birth to healthier offspring than usual, and this trend continued.”

Dr Madiha Ashraf, veterinary officer at the Lahore Zoo, said that breeding of endangered and rare breeds of animals is extremely difficult and requires skill as compared to that of common wild animals.

“Here at the zoo the breeding of big cats is done after taking their health and age into account,” Ashraf said. However, Ashraf conceded that scientific research was missing. “We have just begun the process of tagging rare breeds of animals at various zoos and breeding centers in the province, including Lahore Zoo and Safari Park,” she said.

Ashraf said that under the new process each animal is assigned a number and three or four months prior to mating blood samples are collected and reviewed after which the breeding process is started. “We have begun storing these samples as data on animals that reside here but we still do not have any genetic history of these animals or central data center yet,” she added.

According to experts familiar with the matter, while the breeding of big cats was transforming in the zoos no such hope was on the horizon for other animals.

However, according to Dr Waqar, a veterinary expert who works with the Punjab Livestock Department, the mating process was much different for livestock as compared to zoos and the zoo administration should take a leaf out of their book. “We preserve the semen of healthy cows and buffaloes.

The viruses and bacteria present in semen are eradicated and made healthy, which produces the highest quality breed of livestock.