There is more to wildlife conservation than meets the eye. On the surface, much of it appears to the mass public as focused towards individual species on the brink of extinction, and for good reason. Using handful of ‘enigmatic species’ as they are called – your pandas and tigers and rhinoceroses, etc. – conservationists are able to canvas mass support for saving entire ecosystems and restoring a balance to nature. In some cases, in fact, saving one keystone species can cascade into a chain of natural events that work towards environmental betterment.

Pakistan has been blessed with its own enigmatic species, each more mysterious than the next. In the north we have the elusive snow leopard, rarely caught on film. The mighty Indus is home to another, even more puzzling creature – the blind Indus River Dolphin, known locally as Bhulan.

It’s distinct eyeless form, that appears in many ways contrary to popular conception of dolphins, is one overt reason for why it has captured the imagination, but so are the many myths that circulate around it in folklore. Its sister species in the Ganges is already considered an emblem of the namesake river goddess in Hindu mythology. But for us, perhaps the bigger question is how a dolphin came to call a river a home in the first place.

But mysteries aside, there has been in recent years a visibly upward trend in the rare dolphin’s population. 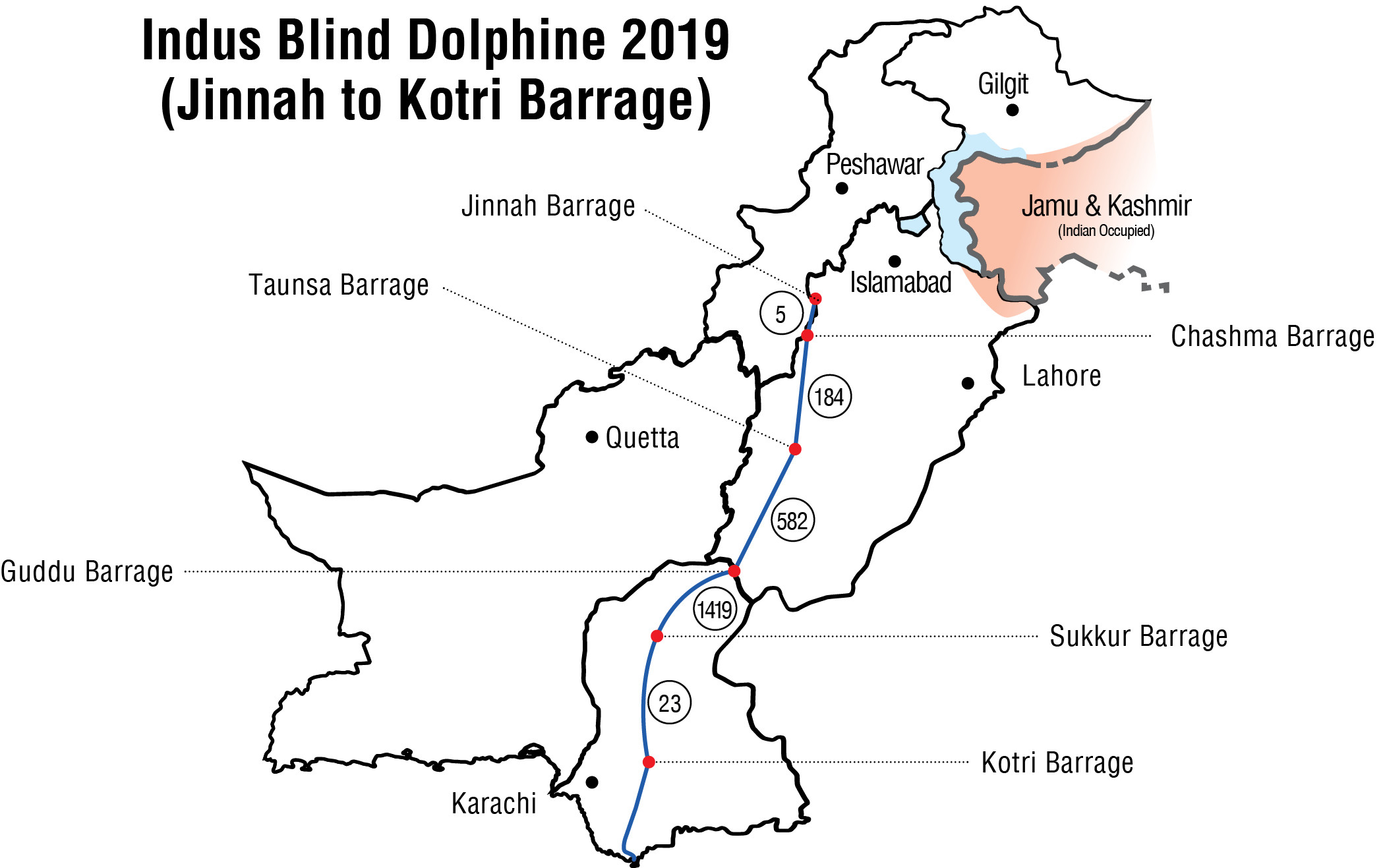 There was once a time when the Indus River Dolphin was ubiquitous in not just the river it takes its name after but all connected waterways. Indus Dolphin Conservation Centre (IDCC) Sukkur Incharge Mir Akhtar Talpur said the species started moving towards endangered status when the South Asian irrigation system was built by the British in the 18th century. “As the many dams and barrages were constructed to cater to the needs of the agriculture sector, this aquatic mammal’s natural range was disturbed and it was confined between one riverine structure and another,” he explained.

Talpur said the authorities started officially monitoring the numbers of the endangered dolphin with the establishment of the Sindh Wildlife Department in 1972. “The department started routine surveys and since then, we have know the exact numbers of the dolphin in Sindh.”

In 1972, when the first survey was carried out, there were just a paltry 132 dolphins in Sindh. “Even so, there has been a steady increase ever since,” Talpur shared. “A 1975 survey showed the numbers had grown to 182. When the last survey was conducted in 2019, we found there were 1,419 river dolphins between the Guddu and Kotri barrages.”

World Wildlife Fund’s (WWF) Project Manager for Sukkur Mohammad Imran Malik said that his organisation’s own independent surveys and rescue operations supported the steady rise in dolphin numbers. “Our results have consistently indicated an increase in this endangered species’ population. We know the numbers have been growing since 2001 and it is quite possible this trend began in the 1970s, when the hunting of this animal was banned,” he said.

Sharing the results of their latest survey, Malik said dolphin abundance was increasing between the Chashma and Taunsa barrages, a range where the species population was previously thought to be stable. “Direct counting results for the sub-population between Chashma and Taunsa barrages were 84, 82, 87 and 170 for the years 2001, 2006, 2011 and 2017 respectively,” he shared. “Between Taunsa and Guddu, similarly, direct counts have been steadily rising from 259 in 2001, to 465 in 2011 and 571 in 2017.”

“The last sub-population surveyed between Guddu and Sukkur barrages, which historically hosted the highest population of the Indus River dolphin also indicated a similar significant increase in population from 602 in 2001 to 1,075 in 2017,” Malik added. 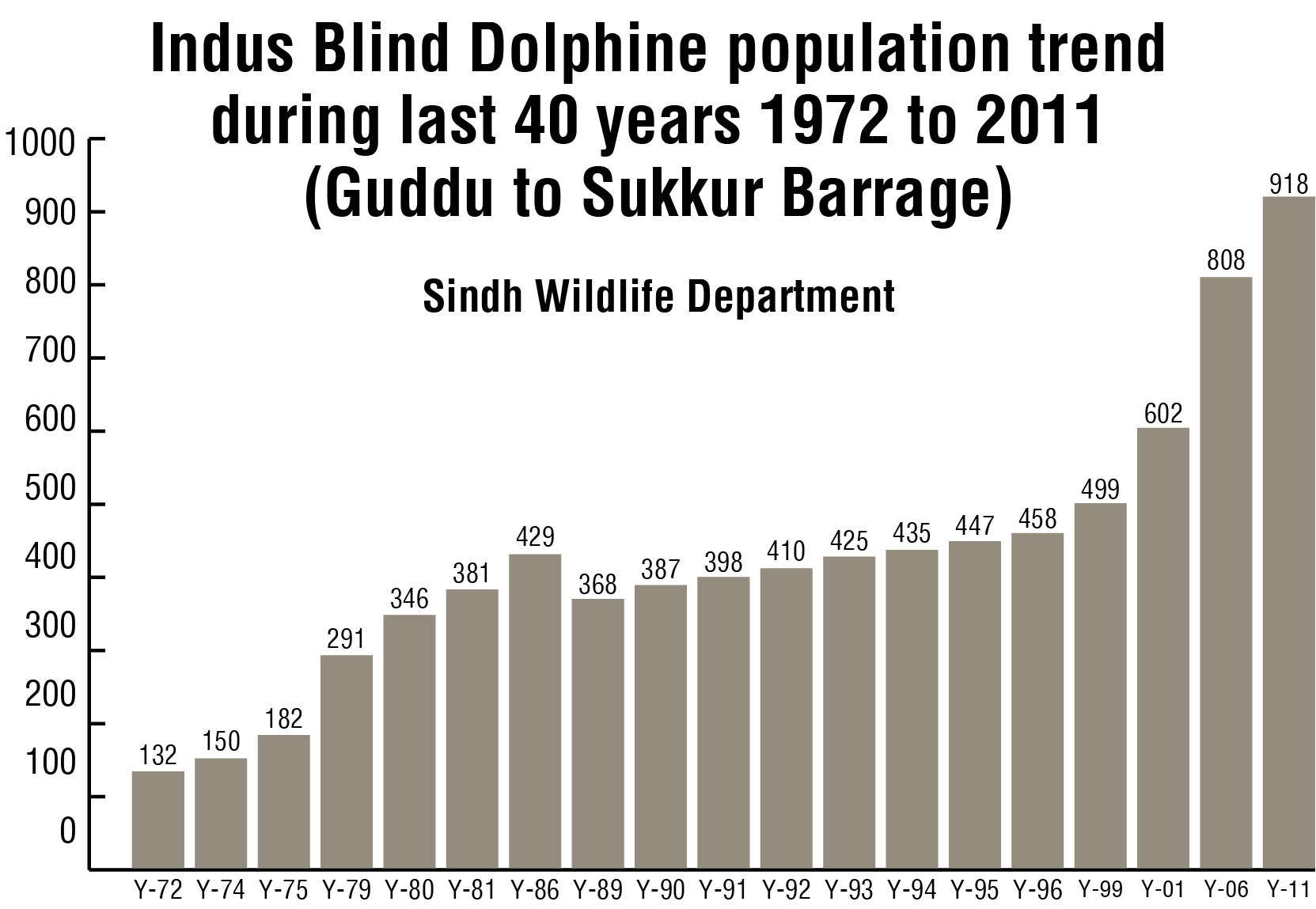 The fishing communities living along the banks of the Indus, particularly the Hindu Bagri community, used to hunt the dolphins back in the day to extract oil from its fat. “They used this oil to cook food, but an awareness campaign initiated by the Sindh Wildlife Department and WWF convinced them and other stakeholders to start taking care of the endangered species,” he said. “Because of this extensive work, members of the riverside communities immediately inform concerned officials if they sight a dead or stranded dolphin,” he added.

WWF’s Malik provided further detail on this participatory approach to wildlife conservation. “We integrate research and effective law enforcement with stakeholder and community engagement,” he said. “Our joint dolphin rescue programme with the Sindh Wildlife Department has been in place since 1992 and has been very effective in rescuing any stranded or trapped dolphins,” he added. Sharing rescue figures, Malik revealed that 131 out 147 stranded dolphins were saved and released back into the river between 1992 and 2017. “Only one specimen could not survive the rescue operation, while 33 could not be rescued at all.”

WWF and the Sindh Wildlife Department have also established a dolphin-monitoring network in collaboration with relevant stakeholders and local communities to monitor the Indus River and adjacent canals and tributaries to save dolphins from other hazards. “The monitoring teams of this network have conducted over 100 monitoring surveys since 2015 to stop illegal fishing and to rescue stranded dolphins with 12 successful rescues during 2016.”

Talking about the steps taken to protect the endangered species, Malik said that a 24-hour phone helpline has been set up to report any stranded dolphins. “The observed increase in the population may be an outcome of all these concrete and continuous efforts,” he said.

According to WWF researchers, habitat fragmentation and degradation due to extraction of water in the dry season and pollution are amongst the prime threats faced by the Indus River Dolphin. Since the 1870s the range of the Indus River dolphin has been reduced to one-fifth of its historical range, primarily due to shortage of water caused by agricultural demands and removal of water from the river to supply the extensive irrigation system in Pakistan.

“Barrages across the Indus River hold running water and divert it into an extensive network of irrigation canals emerging from each barrage to fulfill the need of water for agriculture,” shared Malik. “Indus dolphins tend to move to irrigation canals through flow regulator gates, adjacent to barrages throughout the year and when the canals are closed for maintenance, dolphins are stuck in the canals due to sudden water shortage.”

The WWF official said intensive fishing in the core habitat of the Indus dolphin is also one of the key threats to its population with high probability of dolphin mortality from entanglement in fishing nets, especially when they move into easily accessible and heavily fished irrigation canals. “Habitat fragmentation and degradation due to extraction of water in the dry season and pollution are amongst the prime threats faced by the Indus River dolphin,” he added. “The construction of numerous dams and barrages across the Indus River has led to the fragmentation of the Indus River dolphin population into isolated sub-populations, many of which have been extirpated especially from the upstream reaches of the river,” he concluded.

Most of the big cities of Punjab are situated at the bank of rivers and all the drainage waste is mercilessly released in the river. “Not only this but industrial waste, especially poisonous waste from tanneries, is extremely hazardous for the fragile mammal,” he said. According to him, in Sindh from Guddu barrage to Sukkur barrage, no big cities exist at the bank of Indus, except for Sukkur.

“Yet another reason is scarcity of water in the upstream and downstream from Guddu to Sukkur barrages,” he added. “Ample water is available throughout the year, which is why majority of the blind Indus dolphins are found between the two barrages. The only time of the year when the dolphins face difficulties in surviving is in January during the closure of barrages for annual repairs and maintenance in January.” During those days, cases of dolphins slipping in the canal in search of food are frequent. Upon reports of trapped dolphins, they are rescued and released in the safety of the river.

Talking about the fragility of the dolphins Malik said, “They suffer heart attacks as soon as they are entangled in the fishing nets. Therefore, the fishermen are educated to immediately make efforts to rescue the mammal to save its life.”

Mehram Ali Mirani, an elderly fisherman, strongly condemned the use of poisonous chemicals by some in his trade. “This practice must be stopped because on the one hand it proves hazardous for the marine life and on the other human beings also fall prey to various diseases after eating those poisonous fish,” he said. “We are born fishermen and our survival is linked to the clean and healthy river. Therefore, I request the fishermen community, not to use chemicals to catch fish,” he said.

The Indus River dolphin, one of the rarest freshwater creatures in the world, has been driven to extinction as a result of excessive poaching, water pollution and climate change. It has been catergorised as endangered by the International Union for Conservation of Nature after researchers noticed a significant fall — by more than 50% — in its population.

A dolphin monitoring network was set up with the help of WWF and the provincial wildlife department following a door-to-door awareness campaign with the local fishing community. It is heartening to see the locals actively involved the process. Such sustainable projects are rarely initiated, let alone implemented in Pakistan.

The most significant achievement of this project is that it has changed the mindset of the local fishermen, who viewed these dolphins as a means of earning money rather than as living creatures that coexists together with us. Even though concerted efforts by officials have helped these dolphins survive, the barrages on the Indus River have disrupted the movement pattern of these dolphins, who have had to restrict themselves to a 180km strip of waterway in Sindh. As a result, many often end up in dangerously low water levels. Even though fishermen are now quick to respond and bring them back to open waters, this is not the ultimate solution.

We must do away with any such infrastructure that causes harm to biodiversity. We must do everything within our means to conserve the natural habitat of these animals. In the wake of extinction, we must no longer look at nature and animals as merely resources used to meet our needs. Instead, these animals are a part of the same ecosystem, the same web of life that we are a part of. Once we learn to accept this, our whole outlook towards nature changes. Who knows, perhaps we might be the next in line for extinction.