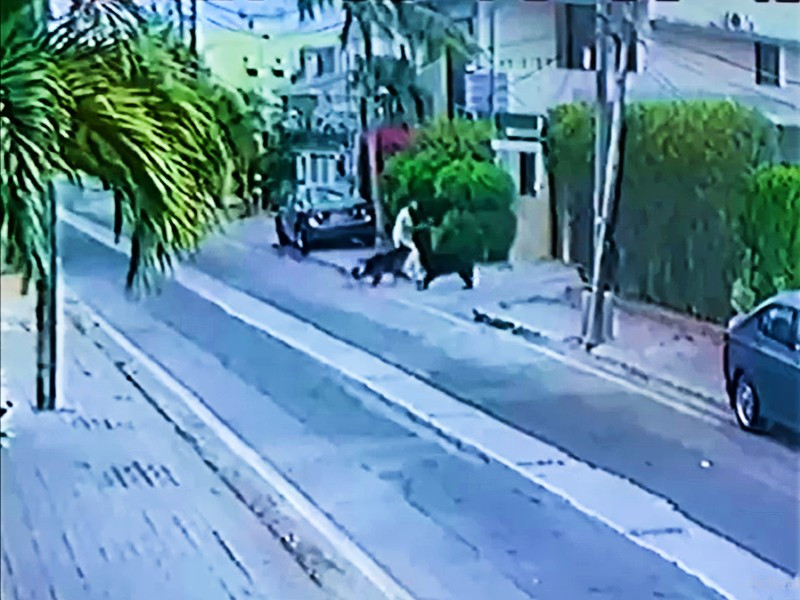 The two German Shepherds that mauled a lawyer in DHA Karachi neighbourhood in June 2021 were “put down”, according to a compromise agreement reached between the canines’ owner and the victim.

Rights activists call the agreement between Humayun Khan and Mirza Akhtar Ali Advocate preposterous; and criticized Ayesha Chundrigar for accepting donation as a result of this compromise.

Khan’s dogs attacked the lawyer when he was out on a morning walk in the quaint neighbourhood of Khyabane Rahat, DHA Phase VI.

The CCTV footage of the incident that went viral on social media showed the two canines pouncing on Mirza Akhtar and pinning him to the ground as he helplessly tried to defend himself.

It was only after the owner’s son intervened, the dogs spared the lawyer – badly mauled and bleeding.

Mirza Akhtar “agreed for the sake of Allah to forgive Humayun Khan”, states the agreement – dated July 6 – between the two parties.

“The two dogs involved in the incident will be euthanised/put down by a veterinarian immediately. Any other such dogs that Humayun Khan has, he shall give them away,” states one of the conditions for the compromise.

The agreement between the two parties further states that Humayun will tender an “unconditional apology” to Mirza Akhtar for the “hurt and injury caused to him”.

Another condition of the compromise states that the dog owner will register any other canines with the Clifton Cantonment Board (CBC) and not let out any other pet dog onto the street unless they are with a “properly trained handler”, leashed and muzzled.

The final clause of the comprise agreement states that Humayun will donate Rs one million to Ayesha Chundrigar Foundation.

A local court had earlier reserved its verdict over the bail plea of the dog owner. The case was registered at the Darakhshan police station and Humayun had acquired bail before arrest, while his employees were in police custody.

While there are a few who support the conditions of the agreement, many on social media have criticised the decision claiming that it sets a dangerous precedence for animal cruelty and killing.

First things first, let us not conflate stray dog bite cases with such incidents. Stray dogs are often abused, neglected and beaten because of which they see humans as a threat. On the other hand, it is the responsibility of the owner to train and control their domesticated animals. Therefore, the two situations should be treated as separate phenomenon. But, one must ask: will euthanising these voiceless dogs do any good? It may prevent further attacks, but the broader issue at hand still remains. Pakistan lacks a Domestic Animals Act under which such cases should be litigated. A comprehensive act should be promulgated after careful consideration with animal rights experts and other stakeholders. This will serve as a form of legal framework for these voiceless animals and bring about some clarity on the matter. Under such an act, domestic animals that display aggressive behaviour can be deemed “menacing” and legal action can be taken therewith. The owner will also be obliged to comply with the rules, which must entail training and conditioning their pets. In some countries, owners can be jailed for up to 5 years if their pet endangers someone’s life. Here, we merely kill the animal to save our own skin.

The fact of the matter is that these voiceless animals cannot defend themselves. It is up to us to protect and uphold the sanctity of life. The first line of action now should be to register domestic animals and their owners at the earliest.

The video went viral when the two dogs belonging to Humayun Khan, a resident of Khayabane Rahat in DHA, were seen to have attacked Mirza Akhtar Ali, who was out for a walk in the street. It was only after the owner’s son intervened, the dogs spared the victim — badly mauled and bleeding.

Mirza Akhtar Ali Khan, an advocate by profession, pressed legal charges against Khan which resulted in a compromise under which Akhtar agreed to forgive Khan on condition that the dogs be put down, that any other canines be registered with the Cantonment Board Clifton (CBC), that he not let out any other dog onto the street unless with a trained handler and that Humayun donate Rs1 million to ACF Animal Rescue, a local animal shelter.

While animal rights activists have decried the condition of putting down the dogs, this incident sets precedence for other dog owners to take responsibility for their pets.

Unfortunately, for many pet owners, there is no sense on how to take care of them. The walking of the dog is left to the domestic help or to a hired person. Dog owners also do not have any clue on what dogs to keep and raise. There has been a sudden influx of Huskies in Karachi despite the fact that this breed is most unsuitable to the weather of the city.

What do most Pakistanis have against dogs? Street dogs are the worst off. Every person who comes near to one simply assumes that the dog will bite. This person then throws stones and injures the hapless dog.

The only dogs that most seem to appreciate are the German Shepherd, the Doberman or similar breeds. And the only way we seem to rear dogs is to train them to become vicious and unfriendly. The concept of a family dog eludes most of us. A dog can only be a watchdog. And a dog isn’t a dog if it doesn’t bite. Hence the constant fear of being bitten by one.

There are some who argue that with people going hungry in the country, why should one spend so much on animals. This argument is flawed. One is not at the expense of the other. This righteous attitude in some only helps us as a nation to treat dogs in the worst manner possible.

For stray dogs, the official response is either poisoning or shooting. I have seen this ugly sight at Sea View some years back where members of an “anti-dog cell” calmly walked on the beach and took pot-shots at dogs within range, in full view of families, including children.

There is a simple, logical and humane solution to such problems. Forget about the West — even countries like Turkey, Nepal and Thailand have animal birth control and vaccination programmes. They catch stray dogs from the streets, about 20 to 30 a day, and sterilise and vaccinate them against rabies. They tag their ears so that people know they have undergone treatment. The strategy is to trap, spay or neuter, vaccinate and treat, and release them.

Some vets in Karachi have started doing this. But we need to do this on a larger scale. A road trip across Punjab and Sindh last year showed that the number of strays has risen considerably, especially in rural areas. Residents keep dogs outside their houses to ensure some sort of security for their surroundings. The problem is that the same dogs become a menace for everyone else. Time and again we have seen such dogs biting innocent passers-by.

It is estimated that every year between 2,000 to 5,000 Pakistanis die of rabies infection caused by the bite of a rabid animal, usually dogs. The tragic death in Larkana of a pre-teen boy, whose final gasps in his mother’s arms were caught on a video that circulated widely on social media, has for the moment brought rabies back into the country’s focus.

The actress, Mashal Khan, criticized killing of these two dogs, saying that rapists and murderers are roaming free while dogs are given death sentence. The actors, Yasir Hussain and Feroze Khan, shared a similar sentiment about putting the dogs down.

Many were appalled over the compromise relating to killing of the dogs and called out the owners for their negligence.

Actor Mashal Khan, Yasir Hussain and Feroze Khan shared a similar sentiment about putting the dogs down. The Suno Chanda star took to Instagram and shared, “In a country where rapists, murderess and pedophiles roam free, two dogs are given the death sentence for their owner’s negligence.” Hussain agreed with Mashal. Khan then shared the Instagram story of the two actors.