Civilians in Afghanistan’s capital live in constant fear of being killed in a targeted attack as the war with the Taliban and other extremist groups drags on. But at night, a different war is being fought — against criminals, and packs of stray dogs stalking the streets.

The shop owners in one Kabul neighborhood speak of a shadow government.

“There are dogs and armed thieves who make people’s lives here hell,” said Fahim Sultani, a local elder who works from the empty dusty hulk of the run-down Aryub Cinema in the northwest part of the city, which he has converted into a makeshift office.

As Afghanistan’s economy has been battered by the coronavirus, crime has flourished in Kabul. Just after the lockdown last year, the dogs on Mr. Sultani’s street, and a handful of security guards, watched what has become a staple in the city: An ice cream vendor in front of the theater was shot at and robbed, he said.

The stray dogs roam throughout the city and are a strange and sad fixture of Kabul, known for snapping, snarling and attacking people passing by, mostly those just trying to eke out a living. By day, the animals rest, conserving their energy until twilight, when they, along with the criminals, command the streets.

Almost every city in the world has to deal with street crime, and some with dog packs. Few, if any, have to navigate those threats while also confronting daily bomb attacks, targeted assassinations and 40 years of unrelenting war.

Certain streets and intersections almost demarcate thief and dog territory, where groups of a dozen or so strays led by a pack leader that residents have come to easily recognize prowl between the shadows and the pitch black strips of road where people dare not walk.

Most of the dogs look like a cross between a shepherd and a Labrador and are small in stature compared with the hulking ones that are used often for fighting in the country. The strays live among piles of trash, at the end of street alleys, near restaurants where they can scavenge for food.

Despite repeated efforts from the city’s municipality to kill them — and the presence of several shelters, Afghan pet owners and empathetic dog-friendly foreigners eager to adopt — the animals thrive in the streets.

Mr. Sultani estimated that about 10 people in his neighborhood were bitten last year. They were mostly vendors tethered to their mobile food stands who were not nearly fast enough to outrun the strays.

Rabies vaccinations are frequent, especially in Kabul, and take a chunk out of the Afghanistan’s Ministry of Public Health budget. It spends around $200,000 a year on the vaccines across the country, said Masouma Jafari, a spokeswoman for the ministry.

Mr. Sultani, 43, is a neighborhood official responsible for about 4,000 families — relaying their demands to the city government — in Kabul’s northwestern reaches. But he has a soft spot for the dogs in the neighborhood, taking care of several who lounge in the theater parking lot.

He protects the animals during the day, often leaving the theater door open so they can evade the morning and afternoon stonings from passing school children.

Mr. Sultani also had an estimate for people robbed in neighborhood last year — about 20 people, he figured. One of them was his brother Sayed Ahmad Shah, who was robbed just a few hundred feet from the theater two months ago. The parking lot dogs were there too, watching.

“If you carry anything after 7 at night they will attack you,” Mr. Ahmad Shah said, referring to both the thieves and the hounds.

Spiraling crime rates, compounded by the three-month coronavirus lockdown last year that left many people jobless, has pushed some of Kabul’s destitute streets ever further into despair as residents reckon with a security situation with little hope of improving.

Residents are caught between two battles: the one in their neighborhood and the bloody conflict in their country.

Since 2014, crime in Kabul has risen steadily. From March 2017 to March 2019, there were roughly 8,000 reported criminal cases, according to a report from the Afghan Analysts Network. The Ministry of Interior Affairs declined to provide crime data for the past year, but in early 2020 the uptick in incidents pushed government officials to ban the use of motorbikes — the primary method of travel for many criminals — though the ruling was barely enforced.

Bearing the brunt of such lawlessness are shop owners like Mohammed Ibraheem, whose small shop that sells drinks and snacks less than a mile from Aryub Cinema is swathed in darkness after sunset. The few streetlights and the steady glow from nearby restaurant signs quickly fade as the road edges along a hill. At the top of the hill is a decaying palace from the 19th century.

Mr. Ibraheem, 20, has worked in his shop for at least seven years. His tired voice sounds as if it comes from someone three times his age. 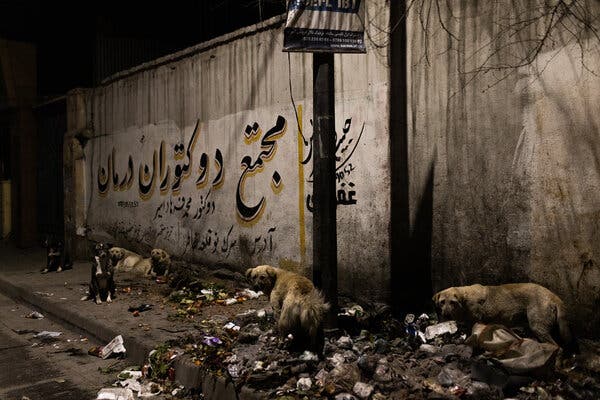 In the last year, he has been forced cut his hours, coming to work late in the morning and leaving in the early evening to try to avoid both the dogs and the thieves. There are now fewer hours during which he can make a living, he said, as he stood near the cardboard boxes in his shop filled with chips and sodas.

“The government and the police, they do what they can,” Mr. Ibraheem said. “But they don’t have the capacity to fight dogs, terrorists and thieves.”

Two shops down, Jawad, 50, who like many Afghans uses just one name, said he was earning half of what he usually made in the past because he too has had to shorten his work days.

“It’s mentally traumatizing,” said Maryam Sultani, 19, a woman who lives next to the theater but bears no relation to Mr. Sultani. She has heard stories from her father about when they used to show movies there decades ago.

“From one side there are the dogs that keep you from leaving the house and from the other it’s the thieves,” she said.

The animals are easily identifiable, the criminals not so much.

Near the shopkeepers’ neighborhood, atop a hill-turned-graveyard-turned-kite flying-arena, a group of friends have opted for peace with the pack of dogs that live among the headstones. On a recent day, a gaggle of half a dozen or so children — all local boys from the area between the ages of 9 and 14 — have appointed one of their own as their certified dog whisperer. Sometimes the boys feed the dogs; other times they play with them. Mostly they just try to coexist.

It is a move rooted in strategy they reckon, so that Four Eyes, Red, Big Feet and Rex — as they’ve come to call the dogs — won’t attack them at night. And maybe, just maybe, the dogs might defend them against any of the nefarious two-legged species lurking in the dark.