In a bid to protect Punjab’s dwindling wildlife, the administration is mulling over the idea of creating a dedicated force of field officers in the province. The provincial government might also declare poaching as a non-bailable offense in Punjab. “We plan to create a force similar to what we already see in Gilgit-Baltistan,” said Syed Samsam Bukhari, Minister for Fisheries and Wildlife.

According to Badar Munir, Honorary Game Warden of Punjab, the province has collected millions from individuals who have violated the existing rules.

“In 2012, steps were taken against poachers and illegal hunting in the province. A total of Rs 26 million have been collected in fines,” claimed Munir.

Wildlife experts believe Punjab is lagging in the race to protect rare species. The largest province in the country has been slow in wildlife conservation and breeding. Illegal hunting of rare species is rampant here.

The wildlife department has a thousand field officers called the Wildlife Watchers. These officers are tasked to protect endangered species and wildlife across the most populous province in the country. Interestingly, the Wildlife Watchers do not have vehicles to chase poachers, nor are they allowed to carry weapons. 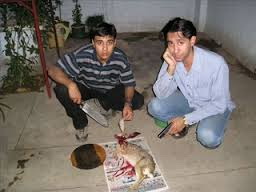 The wildlife ministry has a number of plans to protect rare animals in the province. The creation of the new force will only be possible after the ministry receives an official nod from the chief minister and the PM. “We plan to review all areas in the province that have been declared protected,” said Bukhari. According to the minister, the department is also planning to encourage schools and universities to educate students about the conservation of wildlife.

Experts who have been monitoring the situation in the province for some time said a similar force was created more than a decade ago. “It is still operating in parts of Southern Punjab. However, the plan could not be extended to other parts,” said one expert.

Badar Munir believes poaching can be controlled with adequate field staff. The honorary game warden said the field officers can do their job more effectively when they have the required weapons and vehicles to patrol the areas. “Unfortunately, even when action is taken against poachers, they are out of prison within a few hours,” said Munir.

Ashiq Ahmad Khan, a renowned conservationist, believes the administration will have to establish a dedicated force and also involve local communities to prevent poaching. “Community-based organizations around the world have produced the best results,” claimed Khan, recipient of the prestigious Kenton Miller Award.

“When you inform the community that they will benefit economically and socially from protecting wildlife, they will certainly protect it,” he added. According to existing surveys, Punjab is home to a number of rare species. Areas around the Chashma Barrage, Taunsa Barrage and Cholistan are said to be rich in wildlife. Over the past few years, excessive hunting has pushed many of these rare animals to the brink of extinction.