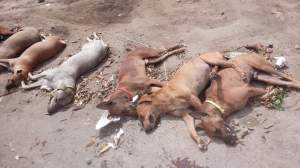 The number of stray dogs has increased in the limits of Rawalpindi’s Metropolitan Municipal Corporation (MMC) and Cantonment areas, leading to the rising incidents of dog bites in the city.

The administration has failed to cope with this serious issue and constantly failing to control it. A large number of dogs roam around the Butchers shops, chicken shops and catering shops besides a flock of dogs outside the wedding halls across the city.

After the sunset, herds of dogs roam on the streets, bazaars and roads.

Regular dog-killing campaigns were earlier carried out in the Rawalpindi district by the municipal corporation and the Cantonment board administration which is obviously NOT the solution. This problem can best be tackled by neutering and vaccinating the stray dogs.

While at the beginning of the year 2000, gun shootings were declared illegal and killing dogs was allowed to be mixed with food poisoning but gradually this method of dog-killing was also abolished, which has led to a proliferation of dogs in the city and Cantonment areas.

Dogs and their puppies often found dead in car crashes cause the spreading of stench and diseases in the city.

The streets of these areas are crowded with dogs. These stray dogs sleep in the day on empty plots, in corners, under parked cars, and come to the street, markets and roads with the sunset.

The incidents of dog bites are on the rise. Vaccines and injections for dog and snake bites have also been discontinued at the allied hospitals and the district headquarters hospital.

The allied hospital management said that a total of 670 cases of dog bites were brought to the hospital in 2021, while 31 dog bite patients were brought in the first month of 2022.

The administrator of the municipality said that soon a campaign will be launched this year to eradicate stray dogs from all over the city which should be avoided at all costs; dogs should be vaccinated.

In Naya Mohalla, in two days, three persons, two children and a woman were bitten by a dog. They were taken to the district hospital (DHQ) but no injections were available in the hospital. Where can citizens go if there is no free injection?

In Feb 2021, four people, including three women, were attacked and bitten by a stray dog near the Rawalpindi Railway Station.

As the victims came under attack, people present on the spot rushed to rescue them. Eyewitnesses said the dog was killed by the crowd.

Immediately, the Rescue-1122 was called in and the injured were transported to the District Headquarters Hospital for medical assistance.

Among the victims is an elderly woman who is said to be in a critical condition. The Rescue-1122 spokesperson said 70-year-old was brought to the hospital with critical wounds and that doctors were doing their best to save her life. The spokesperson identified two other injured as 18-year-old Muqaddas Bibi and 62-year-old Sahib Jan, while the identity of the fourth victim could be ascertained immediately.

Muqadis Bibi came under attack in front of the PTCL office near the army building in the Saddar area, while Sahib Jan was bitten by the dog in front of the Cantt Public School.

The Rescue-1122 said the elderly Muqaddas Yar was attacked by the dog near Pohri Pull, Muhammadi Masjid.

Ironically, the hospital treating the dog-bite victims did not have the anti-rabies vaccine at its disposal.

Providing the injured with basic medical treatment, the hospital administration asked their relatives to buy the vaccine from the market.

The hospital said the injured had sustained deep wounds due to the dog bite. They said tests were being run on the victims to identify the nature of the poison.

Following the incident, citizens expressed dismay over the increasing incidents of dog-bites in the country. People demanded of the authorities to take concrete measures to control the population of stray dogs in a humane way and also ensure the safety for citizens.

In Jan 2021, the district authorities in Islamabad had announced a ban on the culling of dogs. It had also decided to begin spay, neuter and vaccination programmes.

“There will be no more dog shootings in the capital,” DC Islamabad Hamza Shafqaat had told media. The officials had decided that municipal by-laws would be amended to remove the clause mentioning elimination of dogs and that the Capital Development Authority and the Islamabad city administration in collaboration with animal welfare groups would work to spay, neuter and vaccinate stray dogs.