Television actor Yashma Gill on Oct 18, 2020 uploaded a video on Instagram revealing that her recently adopted and vaccinated stray dogs had been shot outside of her home. She uploaded a video of herself yelling at an official at the Cantonment Board Lahore

The video showed her yelling at an official at the Cantonment Board Lahore, demanding an explanation for the murder of her dogs. According to the actor, the dogs had been shot by the board while she was away.

“The dogs slept there, ate there and were not a threat to anyone. They were also vaccinated. They were such innocent dogs; do I show you their videos?” Gill asked the official as she burst into tears.

In response, the official asked her to visit again and discuss the matter with Malik Ijaz, who according to him was the authority figure he was filling in for. “I am telling you I do not have knowledge about this,” he said, adding that “pets are supposed to be kept inside homes.”

“So if they’re outside their homes you’re going to shoot them?” asked the model angrily.

Gill started off her video by reassuring her fans that she had informed the board about her dogs’ vaccination before leaving. And she concluded her video by sharing the explanation she had received, which was that people in the neighborhood had complained about the dogs.

“So if people complain about an animal, that animal will be killed. Wow! This is the statement that I have received.” The actor added another video of herself feeding the now, murdered dogs, along with a receipt verifying their vaccination.

She also penned an elaborate note along with the post. “How can anyone be so inhumane towards such sweet speechless creatures? I had adopted two stray dogs which had been victims of torture at the hands of Cantonment Board. They had once been dragged by their necks with wires around them, and thrown out but still returned.”

“They were blindfolded and taken out, yet they came back. So I adopted them and got them vaccinated. And now that I return for my visit to them in Lahore, I find out that they have been shot by the Cantonment Board? I am in absolute shock!” Gill expressed.

“These dogs were of no harm to anyone, yet someone complained and they had them shot. Please help me get justice for my dogs, and for all the dogs who have been victim to such cruel fate,” pleaded the Pyar Ke Sadqay actor.

She continued, “I don’t know if the guy in the video had anything to do with the incident but his remorse and indifferent attitude along with the statement ‘that pets are only always inside the house’ boils my blood. People with such attitude in authority can’t get us anywhere with the safety of animals in future.”

Gill concluded her note by reinstating that it was a Sunday, because of which she could not get a hold of the relevant authorities. “But please help me get to the bottom of this and whoever is in charge of this atrocity with strays should immediately be told to act otherwise. Rip Rano and Rani” 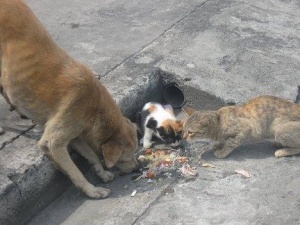 Work to protect the people from stray dogs has stopped in Punjab because of the provincial government’s failure to find a permanent solution to the problem.

The number of stray dogs roaming in the streets, markets and villages in the province is on the rise, while the government remains undecided about solving the problem without killing the animals.

Amid increasing complaints about fear pf attacks by the dogs, various government departments shift the responsibility of addressing the problem on each other.

According to officials concerned, It is the responsibility of the Punjab government to provide health and education facilities to the people, while the local bodies are bound to provide them municipal services. However, the provincial government is expected to devise the policy for protecting the life and health of the citizens.

Under the Local Government Act 2001 departments related to municipal services were were set up at the district level to solve the problems of the people locally.

After the implementation of the system, employees responsible for killing stray dogs served under the districts governments, making it easier for the people to get the services.

The previous government enacted the Local Government Act 2013, which abolished the district government system and restored the old system of municipal corporations.

Health and education services were separated from the local government system and district authorities were created to look after the sectors.

The present government also maintained the health and education authorities under the local government law of 2019.

Now the Lahore Metropolitan Corporation is facing difficulties due to lack of resources and powers regarding dengue spray and killing stray dogs.

After high court orders of not killing stray dogs in the cases filed by some non-governmental organisations (NGOs), officials from the local government, health and livestock departments started working on a project on the directions of Punjab government to protect the citizens in accordance with the verdict.

The local government department trained employees across Punjab to catch stray dogs and all of them were vaccinated against rabies by the health department.

The plan was to catch the dogs and put them in shelters, where they were to be neutered and vaccinated against rabies.

The first phase regarding collecting the stray dogs from various areas was implemented, but confusion persists about the responsibility and funding for building the shelters and feeding and raking care of them.

Under the circumstances, the number of stray dogs in the cities has increased once again, resulting in increasing complaints of dog bite and fear among the people.

However, wherever a complaint is received, a team kills the dog involved in the attack to protect the citizens of the area.

“It is not our job to collect stray dogs, keep them at a shelter home and feed them,” he said in reply to a question.

Dr Saeed said the employees who catch dogs had been vaccinated by the authority. The official said the project to keep the dogs confined could not be completed until the related work was completed by all the departments concerned.

In May, three departments along with the municipal authorities were made responsible for eliminating stray dogs in order to protect the citizens in the province due to lack of coordination and clear demarcation of responsibilities while amending the laws.

Letters were sent to the local bodies in order to bring the local government, health and livestock departments, and district administration together for the purpose.

According to officials, the epidemiology department earlier functioned in the local bodies across Punjab, including Lahore.

Responsibilities were assigned to the employees of the department and the expenses were borne by the local bodies to protect the citizens from seasonal diseases, as well as mosquitoes and stray dogs.

In July 2021, a six-year-old boy died after being bitten by a stray dog at Lahore’s Yasmeen Park.

The father of the boy said that his son, Bilal, was playing in the park when a stray dog bit him on the neck. The boy succumbed to the wound on the way to the hospital.

Letters were sent to the local bodies in order to bring the local government, health and livestock departments, and district administration together to handle the stray dog problem. At present, there is lack of coordination and clear demarcation of responsibilities  relating to the stray dog issue.

Reportedly, the epidemiology department earlier functioned in the local bodies across Punjab including Lahore.

Instead of killing stray dogs, a sterilisation programme had been planned this time to prevent their breeding.

Responsibilities had been assigned to the local government department in this regard, which had started training on dog population management.

2 thoughts on “Stray Dogs in Lahore”