This Planter Doesn’t Stop The Elephants

As a child, Tenzing survived a militant attack on his family. He went on to pioneer elephant-friendly tree plantations. 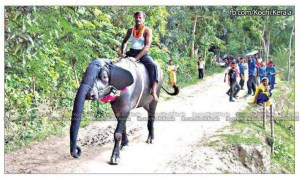 On a cool October evening in 1996, staccato bursts from aut­omatic rifles rang through a small village in the Indian State of Assam’s Udalguri district, along the foothills of the Himalayas. Seven people lay dead. In the family of Dhaniram, headman of Kachibari, only two members survived—Tenzing Bodosa, just 10 years old then, and his mother, who were not at home when the family was attacked by militants of the now-defunct Bodo Liberation Tigers. The headman had incurred their wrath by refusing to provide food or shelter to its cadres.

“Our own people killed us,” says Tenzing. “I was left with only my mother. Since then it’s been a learning experience—every hour of my life taught me certain things and made me stronger. I even worked as a sweeper in a private school in Guwahati before going to Shillong, Bangalore and then Malaysia (to earn a living).”

Around his village, nearly 130 km from Guwahati, Tenzing is trying to ­create an ecosystem ­beneficial to both human beings and wildlife.

While working with a Malaysian construction company, Tenzing learnt to drive, repair machinery, use the internet and speak English. These skills helped when he returned home in 2006. When his mother asked him to return, he also found his calling in life—to create an ecosystem beneficial to both human beings and wildlife, especially elephants, around his village, some 130 km from state capital Guwahati. He started with a tea garden on a small plot of ancestral land. Now he has two  spread over 52 acres.

Tenzing’s compassion and sensitivity towards wildlife brought him recognition when the Wildlife Friendly Enterprise Network (WFEN) and the University of Montana, US, adjudged his two plantations the world’s first “elephant-friendly” tea gardens. The WFEN is a global body that helps business enterprises in preserving wildlife corridors, which are crucial for survival of animals like elephants. And a US company even branded a black tea variety after Tenzing.

What Tenzing has done is simple—he has left his plantations unfenced, allowing elephant herds to travel through it. He does not mind if pachyderm movement destroys some plants. Though pachyderms don’t eat the bitter tea leaves, the sheer girth of the elephants invariably damages standing tea bushes. 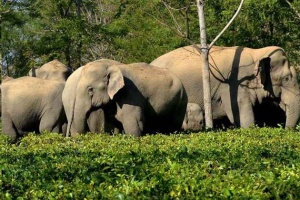 Tenzing grew up among wildlife in his village, which is close to the border with Bhutan and lies along a natural path taken by elephant herds. It is an area rich in other animals and birds, and his plantations are home to magnificent hornbills and peacocks, which roost in the big trees. “Earlier, the elephants used to get inside the garden very frequently. But I have never tried to stop their route. They have every right to roam around like we do. We are to be blamed for destroying their habitat areas,” he says. Tenzing has also planted trees and a bamboo grove alongside his tea gardens so the jumbos get something to munch.

Tenzing’s endeavour can be properly judged only in the context of the growing human-animal conflict across India. As wildlife habitats shrink, more and more animals are being forced to move to human habitats in search of food, leading to increasing confrontation bet­ween man and animal, with casualties on both sides. In eastern India, inc­luding Assam, most of these conflicts are due to shrinking and fragmented elephant habitats. Because of human encroachment on their corridors, pachyderms have had to seek other migratory routes, leading to jumbos killed or injured by speeding trains on tracks passing through wildlife corridors. Then there are elephants poisoned or electrocuted by villagers trying to protect their standing crops.

“At least 48 elephants were killed in Assam in 2017, either poisoned or under a train,” says environmental activist Mub­ina Akhtar At least 35 people have also been killed by tuskers in the same period.

Over the years, Tenzing’s village and adjoining areas have also seen many instances of human-elephant conflict. And one of his missions in life is to help the younger generation understand why humans need to cede space to wildlife. According to the IUCN Red List, Asian elephants are an endangered species, with an estimated 40,000-50,000 remaining—a decline of over 50 per cent in the past 75 years. Half of the elephants are in India.

Also, India’s tea growing areas are primarily located in areas historically inhabited by elephants. A WFEN official says agricultural practices in tea estates present potential hazards for elephants, such as the use of deep and narrow drainage ditches, which can become a death trap for infant and juv­enile elephants. Besides, improperly installed electric fencing or sagging electricity lines also pose electrocution risks for elephants.

Chemicals used in conventional tea production, if not stored securely or applied judiciously, can poison elephants. “Engaging tea growers as active partners in elephant conservation is critical to the future of Asian elephants in the wild,” the official says. “Agricultural lands planted for tea production can play a vital role as corridors of movement bet­ween natural areas. Tea plantations often serve as nurseries where mothers give birth and rest for a few days until their newborn babies are strong enough to move with the herd.”

Tenzing frequently travels to nearby villages and schools to influence stud­ents to plant trees and to love nature. His plantations are also open to tourists and many people from across the world visit his gardens every year for first-hand experience of this unique project. “Anyone can come and plant a sapling in their name. As many visitors keep coming to my place from different parts of the world for various reasons, I ask them to buy a sapling and plant it in my forest. When they visit again after several years, they like to see their plant grow up. Now everyone does that,” Tenzing says.

For Tenzing, a class six dropout, what he has been doing is not anything ext­ra­ordinary. “It’s nothing to be surprised. Why can’t we think of giving back something to nature when we take so much from nature. We breathe fresh air, we drink water, we eat fruits…Why can’t we think of wellbeing of wildlife. If you res­pect nature, then nature too will resp­ect you. I’ve learnt to love and ­respect every individual in and around our surroundings,” says Tenzing, sitting on a makeshift log-bench in his plantation, the snow-clad peaks of the Hima­layas in the background simmering under a setting sun.