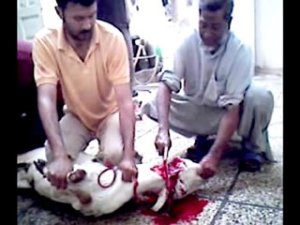 On New Year’s Day in 2019, part of Belgium put into effect a ban on the way Muslims and Jews slaughter animals. The law declares that the animals must be stunned insensible before they are killed, a practice widely applied in the global food industry but rejected by some observant Muslims and Jews, who insist that their time-honored method of slashing an animal’s neck is mandated by their religion and fully humane.

It should be obvious to any reader even from this brief summary that there is bound to be impassioned debate on the issue. And indeed animal-rights advocates and religious leaders have squared off on social media and the internet, citing volumes of scriptural injunctions and scientific studies.

In fact, Muslims and Jews in Belgium and other countries that ban ritual slaughter can still import halal or kosher meat from other countries, and many Muslim communities do allow some forms of electrical stunning that satisfy civil codes. The debate, moreover, is hardly new. Regulations across the European Union require stunning an animal before slaughter, a practice that generally means either firing a bolt into its brain or an electric shock. Most European countries allow religious exceptions, but several — including Sweden, Norway, Iceland, Denmark and Slovenia — do not.

But on a continent with a long history of anti-Semitism and a newer spread of animosity toward Muslim immigrants, any regulation that appears to discriminate against Jewish or Muslim practices and traditions — circumcision and dress are other examples — is bound to be viewed by the religious as insulting and hostile.

Right-wing politicians in several countries have used controls on such religious practices to press bigoted agendas under the cloak of battling for civil or animal rights. In the Belgian case, the idea for the ban was first raised by Ben Weyts, a right-wing Flemish nationalist who is also responsible for animal welfare in the Flanders regional government, which imposed the ban that took effect last week. A similar ban begins later this year in Wallonia. No ban has been approved for Belgium’s third region, around Brussels.

The pretexts of some politicians does not mean all those who insist on stunning have dubious motives. Animal-rights activists have long campaigned, justifiably and successfully, for the humane treatment of animals destined for the table. Many earnestly believe that slashing the neck of a conscious animal causes more suffering than stunning the animal first.

Yet it is equally true that dietary laws are of enormous importance to people of the Jewish and Muslim faiths. Both stipulate that only an animal in perfect health can be slaughtered and dispute that a stunned animal qualifies. Both also hold that their method of swiftly slicing through the jugular vein and carotid artery with a razor-sharp knife renders an animal unconscious almost immediately.

In the United States, the Humane Methods of Slaughter Act of 1958resolved the difference by declaring the methods of Islam and Judaism to be equally humane to stunning.

But those who really care about the welfare of animals should be wary of making common cause with right-wing nationalists whose hostile intent is to make life more difficult for religious minorities. A real conversation on balancing animal rights and religious freedoms can take place only if it is free of hidden bigotry.