“This is the spot,” said Morris Njeru, gazing down at a tangled patch of farmland where he recently found the bloody corpses of David, Mukurino and Scratch — his last donkeys.

Mr. Njeru, 44, a market porter who depends on his animals to ferry goods around this city, had already lost five donkeys earlier in the year. In each case, the thieves slit the animals’ throats and skinned them from the neck down, leaving the meat to vultures and hyenas.

Four months later, all Mr. Njeru could find of the animals was a single hoof, which he pocketed as a memento.

There are scant remains, too, of Mr. Njeru’s once comfortable life. Without his animals, his income plummeted from nearly $30 per day to less than $5. He can no longer afford payments on a loan for a small piece of property he rented, and he fears he will have to take his child from boarding school.

“My life has completely changed,” he said. “I was depending on these donkeys to feed my family.”

For Mr. Njeru and millions of others around the world, donkeys are the primary means to transport food, water, firewood, goods and people. In China, however, they have another purpose: the production of ejiao, a traditional medicine made from gelatin extracted from boiled donkey hides.

Ejiao was once prescribed primarily to supplement lost blood and balance yin and yang, but today it is sought for a range of ills, from delaying aging and increasing libido to treating side effects of chemotherapy and preventing infertility, miscarriage and menstrual irregularity in women.

While ejiao has been around for centuries, its modern popularity began to grow around 2010, when companies such as Dong-E-E-Jiao — the largest manufacturer in China — launched aggressive advertising campaigns. Fifteen years ago, ejiao sold for $9 per pound in China; now, it fetches around $400 per pound.

As demand increased, China’s donkey population — once the world’s largest — has fallen to fewer than six million from 11 million, and by some estimates possibly to as few as three million. Attempts to replenish the herds have proved challenging: Unlike cows or pigs, donkeys do not lend themselves to intensive breeding. Females produce just one foal per year and are prone to spontaneous abortions under stressful conditions.

So Chinese companies have begun buying donkey skins from developing nations. Out of a global population of 44 million, around 1.8 million donkeys are slaughtered per year to produce ejiao, according to a report published last year by the Donkey Sanctuary, a nonprofit based in the United Kingdom.

“There’s a huge appetite for ejiao in China that shows no signs of diminishing,” said Simon Pope, manager of rapid response and campaigns for the organization. “As a result, donkeys are being Hoovered out of communities that depend on them.”

In November, researchers at the Beijing Forestry University warned that China’s demand for ejiao may cause donkeys “to become the next pangolin.”

“China chooses to import donkeys from all over the world at high cost, which may lead to potential crisis of donkeys throughout the rest of the world,” the researchers wrote in the Equine Veterinary Journal.

Donkey skins find their way to China from nations as varied as Kyrgyzstan, Brazil and Mexico. But Africa is the epicenter of the trade, both in terms of the number of animals killed and the impact on the ground.

“In 2016, this business of donkeys erupted,” said Obassy Nguvillah, a police superintendent in Tanzania’s Monduli district, near the Kenyan border. “There were increasing numbers of cases of guys passing into the Maasai area, taking people’s donkeys and transporting them to the Chinese-owned processing plant.”

In Esilalei — a village located on a sprawling, drought-plagued savanna under Mr. Nguvillah’s watch — residents lost nearly 475 donkeys in a single year. While about 175 of the animals were recovered by tracking the thieves into the bush, police believe the remainder were sold to slaughterhouses. Unable to afford replacements, the former owners are still reeling.

“Nowadays, we are no longer happy because our vehicles, our donkeys, are no longer here,” said Katasi Moko, who was left with just one donkey after four others were stolen. 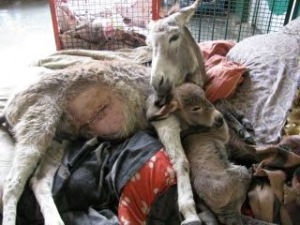 With five donkeys, Ms. Moko was able to complete two tasks each day: collecting water from distant wells, say, or gathering firewood. But with just one donkey, she has time to accomplish just one, because several back-and-forth trips are needed.

“Our workload has increased,” she said.

Fourteen African countries, along with Pakistan, have enacted various bans against the international donkey trade. Tanzania joined the list in June, citing concerns that its donkeys would soon be wiped out if the slaughter continued.

Rimoinet Shamburi, chairman of Esilalei village, said that donkey thefts have decreased since the ban but have not ceased altogether. He believes the legal trade in Kenya is to blame.

“Things are still bad because there’s an industry in Nairobi that’s supporting the stealing of donkeys,” he said.

‘They Come From All Over’

Unlike Tanzania, Kenya’s donkey skin trade shows no signs of slowing. In 2016, prices for skins were fifty times higher than in 2014, while prices for live donkeys have nearly tripled, from about $60 to $165.

The country’s three abattoirs — all of which have Chinese owners or partners — reported processing just under 100,000 donkeys in two years, according to a government memo. Both skin and meat are exported to China, usually through Vietnam or Hong Kong.

Seventeen skin traders have also opened shop, mostly in Nairobi, and a fourth abattoir is rumored to be on the way. The abattoir owners insist that they are bettering the country by generating jobs and paying handsome prices for unneeded donkeys.

“This business has helped so many people,” said John Kariuki, director of Star Brilliant Donkey Export Abattoir in Naivasha. “Instead of having to sell cows and goats, Maasai pastoralists are selling donkeys to pay their children’s school fees.”

Goldox Donkey Slaughterhouse in Baringo County — the largest of Kenya’s abattoirs, claiming to process some 450 donkeys a day — also attempts to spread good will by providing free water to neighbors, and by paying school fees for four local children.

Critics argue that benefits are exaggerated and that the trade creates a slew of problems.

“Donkeys are being stolen and either slaughtered in the bush or transported in a very bad way, without proper papers or public health standards,” said a Kenyan veterinary officer who asked to remain anonymous for fear of reprisals from government superiors.

“All of us — the donkey owners, the veterinary professionals — are against the trade, but the government is not taking a keen interest on this because it provides income to them.”

According to the most recent census in 2009, Kenya had some 1.8 million donkeys supporting an estimated 10 million people. When the next count is published in 2019, Solomon Onyango, program development manager for veterinary science at The Donkey Sanctuary Kenya, expects that figure to have dropped significantly.

According to the organization, fierce demand is already draining neighboring countries; donkeys sometimes are brought into Kenya from Uganda, Somalia or Tanzania.

Silas Chesebe, an interpreter at Goldox, confirmed that the animals purchased by the slaughterhouse sometimes cross borders. “They come from all over, including Tanzania,” he said.

In an effort to safeguard against purchasing stolen donkeys, he added, Goldox requires its sellers to obtain two “no objection” documents signed by an on-site government meat inspector and a procurement officer. The procurement officer who issues the first document, however, is a company employee.

Mr. Chesebe explained that the slaughterhouse also limits its purchases of dried skins to those sold by Turkana people — because, he said, “everyone knows that only Turkana eat donkeys” — and to fresh skins from sellers who claim their animals died on the way to the abattoir.

Dr. Onyango maintained that none of these rules is sufficient to ensure that donkeys and skins are legally acquired.

In a few rare cases, owners who live near the abattoirs have successfully identified and rescued their animals. Because of this, Lu Donglin, Goldox’s director, announced in October that the abattoir would begin issuing checks that take three days to clear, allowing the company time to recoup payments in the event that stolen donkeys are reclaimed by villagers.

Mr. Kariuki, of Star Brilliant, agreed that theft is a problem and said that he now requires sellers to obtain transport permits from Kenya’s veterinary department.

“I try my best to stop the stealing, because it’s very sad when a poor woman comes here crying that she has lost her donkey that she was depending on to carry water,” he said. “I really feel bad about that and discourage it.”

Complaints about the abattoirs have extended beyond their role in fueling theft, however. Donkeys often arrive in horrific condition, some with broken legs or maggot-infested wounds, and many in states of near starvation. Cruelty complaints filed by the Kenya Society for the Protection and Care of Animals — including allegations that donkeys were kept for days in the sun and rain without sustenance — led the government to shut down Star Brilliant for a month.

“There’s no incentive to provide food, water or veterinary care,” Mr. Pope said. “The situation is utterly horrendous from an animal welfare point of view.”

Donkeys that die on the road, he added, are often skinned on the spot, their carcasses left to rot.

Indeed, waste disposal has become a significant issue. Last fall, Goldox began dumping donkey remains at a parcel of land it purchased in Chemogoch village, down the road from its slaughterhouse.

After residents living adjacent to the site complained, the company began burying the waste rather than leaving it in the open. But neighbors say the situation is still unacceptable, accusing the company of contaminating ground water and breeding disease.

On a recent visit to the dumping site, several deep, open pits awaited donkey remains, while other areas were covered with recently turned earth. Donkey skulls, ribs, vertebrae and leg bones were scattered in the grass and dirt. A putrid smell hung in the air, and vultures circled overhead.

Evans Kiprop, a farmer whose home is located a few yards away, claims that his cows have developed foot rot and eye problems as a result of the pollution, and that their milk production has fallen to two and a half gallons daily from about eight gallons. He said that feral dogs now frequently gather here, dragging donkey remains to areas where his children play and raising concerns about safety, sanitation and rabies.

“We don’t want to eat or sleep here,” added Koros Kipkoech, another neighbor. “They’re making our village their dumping place.”

As frustrations grow, both donkey owners and the Kenya Veterinary Association have held protests in Nairobi and in other cities. In July, Mr. Njeru and more than 1,000 other theft victims called for the immediate closure of the donkey skin trade in a petition delivered to Kenya’s Ministry of Agriculture, Livestock and Fisheries, which regulates the industry.

“People are stealing and selling stolen donkeys, but the government is not helping,” Mr. Njeru said. “I reported the crime to the police, but they took no action.”

Ministry officials did not respond to interview requests, but a memo issued in September gives no indication that officials will close the trade. Instead, it states that the industry offers strong employment opportunities and potential for economic development, a conclusion that Dr. Onyango and other critics dispute.

“Should we go into the cocaine business or the sale of elephant tusks just because it makes money?” he said. “You can’t just allow trade in the name of business if it’s hurting people.”