Sitting in his basement, below the crowded dirt roads of Wazirabad village, Mohammad Saud leaned over the body of an injured black kite.

The room was cramped, its walls chipping blue paint, the noise from the streets above drowned out by the whir of a fan. Mr. Saud stared at the bird in front of him for a couple of seconds, then gently folded its wing over with a gloved hand. At least two bones, four tendons and two muscles had been snapped. The bird’s head tilted back limply, eyes cloudy. Mr. Saud adjusted his glasses with the crook of his elbow, then stated the obvious: “This is a gone case. Nothing can be done.”

Mr. Saud placed the kite back into a thin cardboard box. As he did so, Salik Rehman, a young employee of Mr. Saud, reached into a different cardboard box and pulled out another black kite. This bird’s right wing was wrapped in a gauze bandage stained with dried blood and pus. Mr. Saud examined it briefly. Another gone case, he concluded; it would have to be euthanized.

Fourteen more cardboard boxes surrounded them, each filled with a black kite that Mr. Rehman, Mr. Saud and Nadeem Shehzad, Mr. Saud’s brother, had collected earlier in the day from animal hospitals around New Delhi. The three men, along with a part-time veterinarian, comprise a bird rehabilitation organization called Wildlife Rescue that treats more than 2,000 birds of prey a year.

Nearly all of those birds are black kites, which are everywhere in the city. The Yamuna River, which flows by Wazirabad, is so toxic that some sections cannot sustain aquatic life, but kites scavenge muddy trash from its banks in swarms. On a typical day, dozens can be seen circling above Old Delhi, the bustling heart of the city, rising on columns of warm air.

Mr. Saud and Mr. Shehzad have sacrificed everything for Wildlife Rescue since founding it 20 years ago. Sacrificed everything for the black kite, a bird that is neither endangered nor particularly attractive and, in New Delhi, is about as unloved as the pigeon. “It’s some kind of sense of duty,” Mr. Shehzad said, with a shrug. “If not us, then nobody’s going to take care of them.” 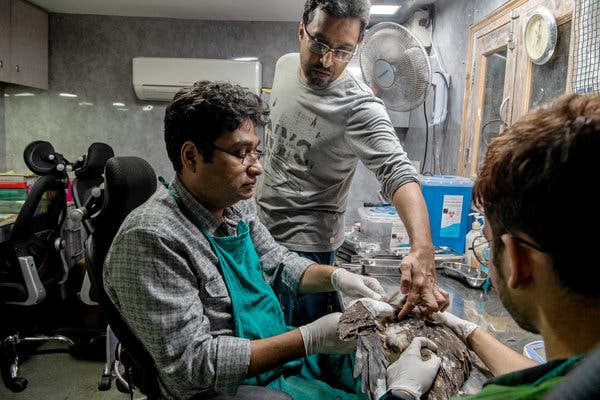 Despite its name, the black kite is dark brown, its feathers speckled with white and eyes deep-set behind a sharply curved beak. In 1997, when Mr. Shehzad and Mr. Saud were in high school, they found a kite with a bloody wing on a street near their house in Old Delhi.

The bird was tangled in manja — cotton thread coated with colorful layers of crushed glass. Manja is often used to fly paper kites, a popular pastime in India, one that became a symbol of national pride in New Delhi after the country gained independence from Britain in 1947. On clear days, especially after monsoon season, when the city’s rooftops are dotted with people, kites speckle the sky, their threads forming an invisible cat’s cradle overhead.

The crushed glass gives manja enough texture to sever the strings of other kites in informal neighborhood competitions, but it can be fatal. Every year a dozen residents — speeding motorcyclists, rickshaw drivers, young children — are killed when glass-encrusted thread falls and wraps around their necks.

In 2017, the city banned the use of manja, but to little effect; the thread is still sold in many street-side markets and can be found on almost every kite in the air. It is a particular threat to birds. Thousands have their wings slashed in the mild weather of late summer and autumn, and are sent tumbling down to the crowded streets below.

Back in 1997, the brothers took the injured black kite they had found — its wing torn by a paper kite — to the Charity Bird Hospital, the largest and oldest bird hospital in the city and one of several animal hospitals established by Jains in New Delhi.

A core tenet of Jainism, a small but influential religion in India, is ahimsa, the practice of nonviolence and compassion toward all forms of life. On a wall of the Charity Bird Hospital, located within Shri Digambar Jain Lal Mandir, a Jain temple with tall red spires, is a painting of a Jain king sacrificing his arm, then his foot and eventually his life to save a pigeon.

The practice of ahimsa benefits wildlife but can also complicate procedures in animal hospitals. Elsewhere, a wild animal would be euthanized if it had no chance of being rehabilitated to its habitat, but Jains do not euthanize. Instead, they care for seriously injured birds, in cages, until they die.

Jains also do not handle meat on temple grounds. Consequently, the Charity Bird Hospital refused to accept the kite — a carnivore — that Mr. Shehzad and Mr. Saud found. Dr. Nidish Bharadwaj, one of the hospital’s veterinarians, said in an interview that he has tried to feed raptors a mixture of cheese and soybeans, but it is not enough. If an injury to a black kite was serious, the hospital would turn the bird away, knowing it would starve if kept for more than a day. A death sentence either way.

At the time, Mr. Shehzad was confused by this logic. “Why is there discrimination between a vegetarian and a nonvegetarian?” he thought. As Muslims, both he and Mr. Saud eat meat, and they took the hospital’s rejection personally. “It hit us somewhere inside, because we were nonvegetarian ourselves,” he said. The brothers brought the kite back to where they had found it. They could do nothing else.

‘We have destroyed our family life’

Over time and with the help of a number of local veterinarians, Mr. Shehzad and Mr. Saud started treating the birds themselves. They collected kites from the Charity Bird Hospital and other Jain-owned hospitals, and brought them back to their basement in Wazirabad to care for them. There, the brothers learned how to clean and bandage open wounds, unwrap wings from tangled manja and feed raptors raw buffalo meat out of the palms of their hands.

Ninety percent of the kites that Mr. Saud and Mr. Shehzad collect have wings slashed by manja, and about half of these die from gangrene or infection. Most are gone cases before they enter the basement room; others must be euthanized by a veterinarian. The kites that are nursed back to health are brought up three narrow flights of stairs to the roof, where they join several dozen other birds in various states of recovery, packed into three wire cages. The largest cage has an open top that fully rehabilitated kites can use as a gate of re-entry to the city. 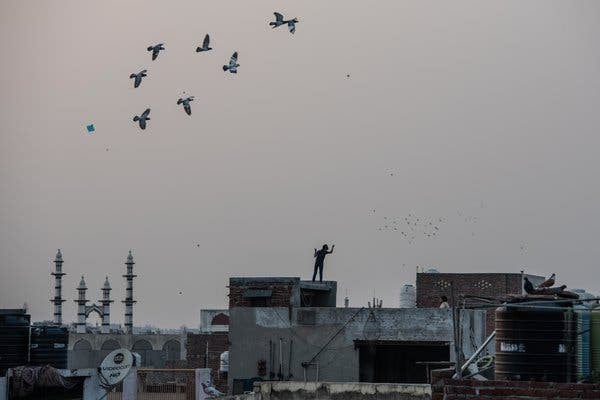 A boy flying a paper kite on a roof in Old Delhi. 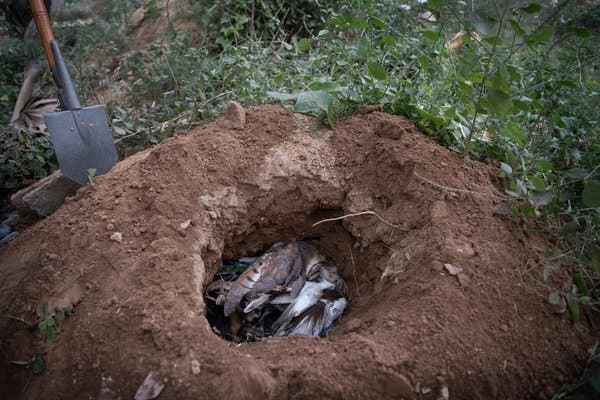 Near the house, released kites, healthy enough to fly short distances, perch in rows on rooftops and window sills. Mr. Shehzad and Mr. Saud estimate that they have treated 20,000 black kites in the past 20 years. They sometimes dedicate more than 12 hours a day to treating birds; Mr. Saud said that he sometimes misses dinner while caring for kites and rarely finds time to play or do homework with his young son.

The organization’s expenses — equipment, veterinarian, transportation and more than 500 pounds of meat every month — have also placed a financial burden on the brothers. They have financed the operation entirely with the profits from their family’s liquid-soap dispenser manufacturing business, which they run out of their basement next to the small room filled with injured birds.

They receive almost no support from the government; their grant requests have been rejected for a variety of bureaucratic reasons, but Mr. Shehzad is suspicious. He thinks it has something to do with the fact that Wildlife Rescue treats nonvegetarian birds.

His wife, Tabassum Shehzad, sympathizes with his calling, and sometimes even helps to feed the birds. Nonetheless, she said, her husband was “ruining his life.” She might not have married him had she known things would go this way.

Now, with almost all their money gone and their families worn out, the brothers are confronting the prospect of shutting down Wildlife Rescue. “People don’t want us to work?” Mr. Shehzad said. “O.K., this is the best we can do. Actually, we did better than our best: We are already empty.” 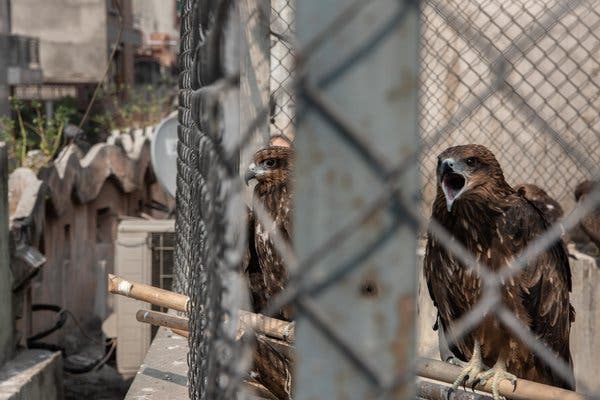