Walden’s Puddle, a nonprofit wildlife rescue organization in a rural area of Nashville, recently posted a set of photos of a barred owl caught in the jaws of a leg-hold trap. The first photo, which featured the owl on the ground, its wings spread wide and its eyes cast down, was emblazoned with the words “Graphic images ahead.” I didn’t click through to see the rest of the pictures. The sight of that magnificent creature of the air tethered to the ground was graphic enough to break my heart. I didn’t need to see what the rest of the images would inevitably reveal: sinews torn, bones splintered, flesh bloody and swollen, great yellow claws mangled beyond repair.

Walden’s Puddle rehabilitates and releases orphaned and injured animals, and its Instagram account is normally a feel-good feed of squirrels, songbirds, turtles, deer, raccoons, opossums, snakes, rabbits, foxes, skunks, groundhogs, bobcats — pretty much everything that flies or crawls or walks or swims — and all of them on the mend. The caption to the post about the barred owl, which had to be euthanized, was uncharacteristically fierce:

These traps are cruel, evil, disgusting and should be illegal, causing unimaginable suffering to any creature who gets caught in its unforgiving jaws. While it is illegal to harm protected bird species such as this one (though these situations rarely result in criminal charges), these types of traps are sadly still legal to use in the state of Tennessee and in many other places, though they’ve been outlawed for many years in other parts of the world. Because the law requires they only be checked every 36 hours, any animal stuck in its grip will experience unimaginable pain and fear, possibly for hours or days.

Although their use has been banned or severely curtailed in more than 120 countries, leg-hold traps are indeed legal in Tennessee and in most other states in this country. Traps are sometimes used by farmers and ranchers to catch livestock predators, but the primary use for leg-hold traps is to catch an animal in a way that preserves the value of its pelt. Fur-edged down parkas, a fashion trend kick-started by a 2013 Sports Illustrated cover featuring the model Kate Upton wearing a bikini and a fur-trimmed Canada Goose parka, are now so prevalent among the affluent that they have caused a boom in backwoods trapping.

Trappers still use leg-hold traps illegally in states where they have been banned, but the problem isn’t generally a matter of legality. The problem is that these traps, and every other kind of trap on the market, are indiscriminate. They mangle pets and people. They mutilate “trash animals” whose pelts are worth nothing to the fur industry. They destroy songbirds and raptors, all of whom are federally protected. And in every one of those creatures, they cause unimaginable suffering.

There are many contentious issues here, but let’s leave aside for now the question of how on God’s green earth a wild animal’s life could possibly be worth less than a fashion statement. Let’s leave aside the question of whether there are better ways for farmers and ranchers to share their ecosystem with the animals who were there first, and better ways for trappers to make a living. Let’s leave aside all fundamental questions of whether human beings have the right to take another animal’s life, and if so for what reasons. These are good questions, and other writers have addressed the issues at length, and from all sides of the argument.

The question I want to ask is simpler than that. I want to know why it is still legal to kill animals in ways that cause inexpressible pain and fear and destruction, to both the targeted animals and an immense range of others. Why, when there are humane ways to end an animal’s life, is it still legal to end an animal’s life in any other way? Even people who have no moral qualms about killing animals, at least in some contexts, would surely draw the line at lethal methods that cause another creature to suffer terribly, and for no reasonable purpose.

Hunters, for example, are just beginning to recognize the collateral damage that lead ammunition does to scavenger animals — who are poisoned by eating lead-tainted meat left in the field — and opting to hunt with copper bullets instead. The stakes are high and growing. Many species are already struggling because of habitat loss and climate change. We can’t afford to keep losing upward of 20 million bears, coyotes, raptors and carrion eaters like vultures and ravens for no reason but longstanding habit among hunters. 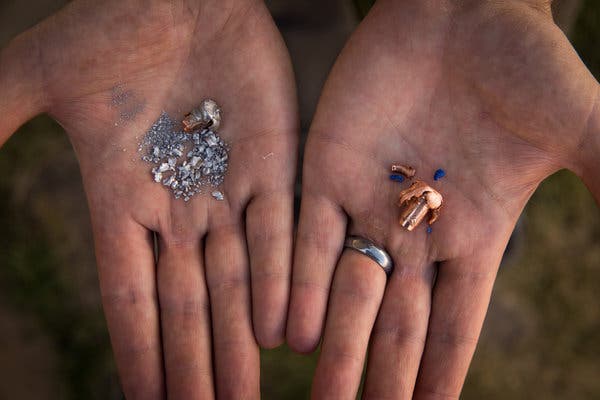 Too many people aren’t aware that wild animals so often suffer horrific deaths, even closer to home. We prefer not to get blood on our hands, so we choose to kill them in ways that keep their deaths out of sight. A mousetrap is designed to kill instantly, but we don’t want to look at the little broken-necked mouse, so we set out poison. We don’t see the mouse staggering outside to die slowly. We never think of the hawk or the fox that will eat the poisoned mouse, and so we don’t think of its terrible, stumbling death either. Or we set out little cardboard boxes lined with glue, never imagining the skin-peeling horror that happens when an animal stuck in a glue trap struggles to break free.

And people who wear parkas trimmed in fur don’t think about the barred owl whose feet were destroyed by a leg-hold trap meant for a coyote. They probably don’t even think about the coyote, struggling for days in the snow with a mutilated leg — bleeding, torn, bone-splintered — only to die of suffocation or blunt-force trauma when the trapper arrives to claim his pelt.

The word “humane” refers to qualities we believe are part of human nature: tenderness, compassion, mercy. We rarely live up to our own etymology, but in this matter it poses no great trouble for us to do so. We don’t need to agree on whether it’s morally permissible to kill animals to agree that this is not the way to do it. It’s time to ban glue strips. It’s time to ban rat poison. It’s time to ban lead ammunition. It’s time to ban traps that injure but do not kill. There is no good reason not to.

Margaret Renkl (@MargaretRenkl) is a contributing opinion writer who covers flora, fauna, politics and culture in the American South. She is the author of the book “Late Migrations: A Natural History of Love and Loss.”