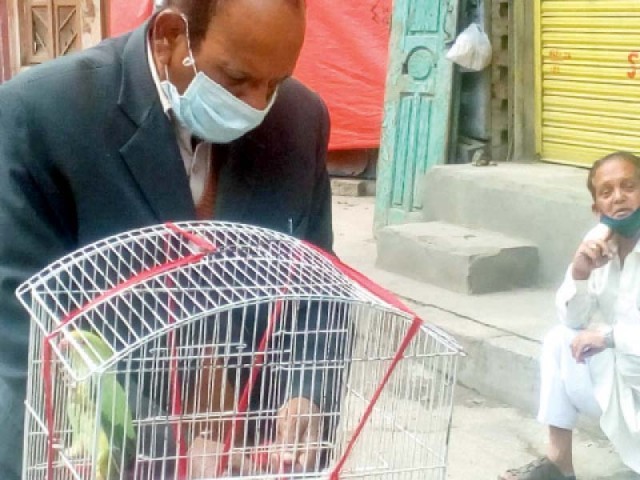 With the novel coronavirus (Covid-19) pandemic forcing the government to restrict people to their homes in the garrison city, it has also taken a toll on hundreds of animals housed in the pet shops with many dying while others were on the verge of starvation.

However, the district administration later allowed them to open the stores for brief periods to feed the animals.

The Alam Khan Road in Rawalpindi, which once echoed with the sounds of chirping birds, barking dogs and purring cats, fell silent after the Punjab government imposed a general lockdown across the province in the wake of Covid-19 outbreak.

The notification issued by the government directed all shops in the city to close, except those selling food and medicines. The pet shop owners on Alam Khan Road had little option but to comply and bear the loss of business like others.

The 40 shops on Alam Road house different species of birds, both local and imported, such as exotic parrots, pigeons, sparrows, roosters as well as cats and dogs, besides exotic fish are worried for the well-being of these creatures.

Owing to the lockdown, the caretakers have been unable to provide feed and water to these pets on time, due to which dozens of animals died of starvation and dehydration, multiplying the loss faced by the owners of these stores. 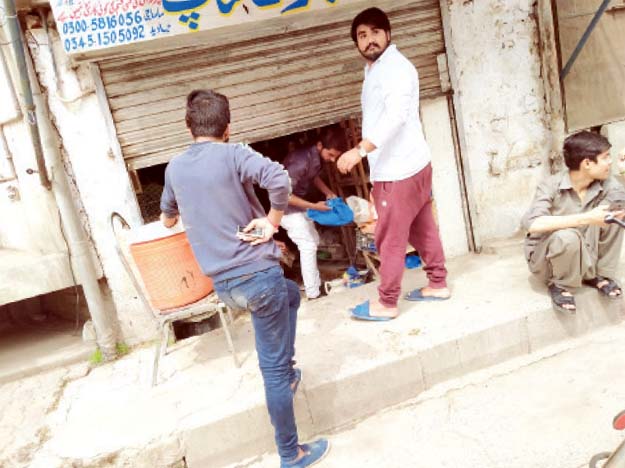 The shopkeepers said that at this point they were more concerned about saving the animals which are left alive rather than calculating what they have lost.

Those who have not been able to shift the housed animals to their villages or to open fields in the suburban areas before the lockdown finally came out in groups on Thursday to quench thirst and provide food to those caged behind the rolling shutters.

Many shopkeepers partially pulled the shutters of their shops up. Some went inside to feed the birds and animals while others stood to watch outside.

Police initially tried to pull the shutters down as the pet shops were not among those exempted during the partial-curfew, but later allowed them to open their shops with half-shutters up to feed their animals for a few minutes and leave.

Since then, the shopkeepers said they are a bit relieved as no more animals will die of hunger or thirst.

Iqbal and Fahad, who run pet shops on Alam Khan Road, told the Express Tribune that the district administration has allowed them to briefly open their shops to care for their animals and birds.

The store owners asserted that they would not have faced a massive loss if the district administration considered this aspect when imposing the lockdown.

However, Iqbal said that he felt comforted that from now on, it will not happen again.

“We are now opening our shops two times a day to feed the animals.

We are not doing any business, only feeding the ones which require food and water, just like us humans,” Fahad said.

He added that those who sell aquariums and fish do not face the same situation as them the fish can survive easily if they are fed even once in two days, provided the air-pumps and filters of aquarium keep running.

Fahad said that unlike fish, other pets require food and water at least twice a day. “We will now make sure they get it.”

However, the closure of the shops and opening for a brief period has also raised hygiene issues in the shops and their immediate surroundings.

The cages of animals could not be cleaned and it may cause the animals to fall sick.

As a result, the entire area has been engulfed in a putrid odour. The shopkeepers have demanded the administration to spray disinfectants in the shops daily during the pandemic.

Many Animals Die in Karachi Due to Lockdown

While Sindh continues to be under lockdown, hundreds of animals in Karachi’s Empress Market perished due to suffocation and starvation. The market had shuttered down two weeks earlier, after a lockdown was first announced by the provincial government on March 22. In haste, the shop owners evidently did not take any steps to ensure the protection of the animals in their care. Only a handful were rescued, thanks to the efforts of animal rights activists.However, by the time they reached, they noted that around 70% of them were already dead, their lifeless bodies strewn on the floors of the shops. Even in the original epicentre of the coronavirus outbreak, Wuhan, thousands of animals left abandoned inside their homes during a strict lockdown were rescued by a concerned group of animal lovers. Like many diseases before it, the novel coronavirus too began from an animal source, and is likely to be connected to the international wildlife trade that is notorious for its ill treatment of animals.

Recently, in an article for the Financial Times, Arundhati Roy wrote that “…in the midst of this terrible despair, it offers us a chance to rethink the doomsday machine we have built for ourselves. Nothing could be worse than a return to normality”. In a world where it is ‘normal’ to treat all living creatures as commodities to use and discard at will, and where human desire reigns supreme, animal rights are barely given a thought. Beyond necessity, they are seen as a means to an end — and the end is often profit — to satisfy human consumption and frivolity. While the pet industry is cruel in itself, encouraging practices such as breeding, perhaps nowhere is this brutality more evident than in modern factory farming. Millions of animals are abused, caged in small spaces, while those deemed ‘useless’ are exterminated without a thought — and this is just the tip of the iceberg.

Left out of the list of essential services because they do not offer any survival element for homo sapiens, hundreds of pets — trapped in dark, unventilated stores for days — starved. Those that survived were left caged with the carcasses of their companions. The dead rotted and the living sank in their own multiplying, putrid excrement. No more able to bear their screams and scratching from behind closed shutters, pet store owners, animal lovers and animal rights activists risked arrest and even infection by the invisible virus to attend to the surviving animals and extend to them the branch of life in major cities of the country viz, Karachi, Lahore and Rawalpindi.

The sad fact, however, is that the district administration in each of these cities had to be explained that it was our moral and ethical responsibility as humans and as believers to also care for these animals in such desperate times, and that the abandonment of these creatures is akin to losing our humanity. Fortunately, we proved that we still have a shred of soul left within us.

Survivors from the specialist corner of Karachi´s sprawling Empress Market were only rescued after activists appealed to the authorities for access. When people went inside, the majority of them were dead, about 70 percent. Their bodies were lying on the ground. Starving and locked in cages with no light or ventilation, the survivors sat amongst the dead, trembling.

As the virus pandemic grew, Pakistan´s major cities were plunged into lockdown, forcing many shops to close. Only stalls selling essential goods such as food and medicine were allowed to continue operating.

It left pet shop owners blocked from their businesses, some resorting to sneaking in at night to feed the animals. After the desperate rescue, Chundrigar has now convinced the Karachi authorities to allow pet shop owners and her team daily access to the animals.

In Lahore, animals met with a similar fate. The bodies of about 20 dogs were found dumped in a sewer near Tollinton Market, a hub for pet businesses which had closed leaving animals to starve.

Kiran Maheen was able to rescue more than two dozen dogs, rabbits and cats after convincing officials at the market to let her in, but a large number had already died.

“When the police opened up the shutters, a lot of animals were already lying dead inside,” Maheen said, adding that many had suffocated from a lack of air.