The high incidence of dog and snake bites has emerged as a health challenge in Khyber Pakhtunkhwa.

According to a report compiled by the District Health Information System (DHIS), Peshawar, around 225,749 people were bitten by dogs and 11,651 by snakes in 27 districts of the province from 2016 to 2019.

The official statistics of these cases from the newly-merged tribal districts are unavailable.

The civil society and animal rights activists oppose the eradication of stray dogs by shooting or poisoning and advocate sterilisation, saying the procedure prevents stray dogs from breeding and considerably reduces the dog bite incidence.

A recent news report of a foreign media organisation revealed that Peshawar had 5000-7000 stray dogs, which roamed the city streets without let or hindrance and thus, posing a serious threat to people’s health.

The statistics show that Peshawar district has the highest dog and snake bite incidence in the province. The city reported 10,046 cases of dog bites and 89 of snake bites in 2018.

Only five dog bite cases were reported in central Kohistan district in the year. However, no incident of snake bite occurred there.

Lower Kohistan district has the distinction of witnessing not a single dog and snake bite case in 2019.

A total of 623 people were bitten by stray dogs and 82 by snakes in the provincial capital in 2018. Though the dog bite incidence dropped significantly to 372 next year, the number of snake bite cases surged to 297.

Despite official claims and decline in dog bite incidence, the people insisted that most healthcare units, including hospitals, didn’t have the required facilities against such cases.

Health expert Mushtaq Afridi said most city hospitals didn’t have anti-rabies vaccine and anti-venom and if the government didn’t realise the intensity of the problem, public life could suffer serious harm.

He said the incidence of dog and snake bites in tribal districts could stun the people at the helm as the region formerly known as Fata had no or little healthcare facilities.

An official of the health department said district health officers had been directed to ensure the availability of vaccines against dog and snake bites, while coordination between preventive and curative sections had been strengthened to address the issue.

“Better public awareness is imperative as mortality rate by rabies is 100 per cent. People should report bites by stray dogs on time for effective treatment,” he said.

Livestock department district director Dr Syed Masoom Ali said that previously, stray dogs were either killed or culled but his department adopted a new method to do away with the menace and that’s sterilisation.

He said the department had established a unique facility in Chagharmati area of Peshawar city with an operating theatre for stray dogs.

The director said the government had approved Rs 150 million for addressing the stray dog issue.

“We recently opened another operating theatre at the Civil Hospital Peshawar, while the two more will be set up in Badabher area and a veterinary facility in Peshawar,” he said.

Dr Masoom said the WSSP and PDA workers caught stray dogs and brought them to facilities for sterilisation and rabies tests.

The director said the dogs were tagged with microchips, while a ribbon was tied to their collars for identification after vaccination and sterilisation.

He said the new method would not only reduce the threat to public health but would also protect rights of stray dogs through neutering, ownership and adoption.

Animal welfare workers believe that each stray gives birth to several pups, who then multiply. According to the activists, the absence of canine contraceptive vaccination drives leads to more strays on the streets.

“No one in the province is paying attention to the growing issue of stray animals, even while it does not require millions,” said Zeba Masood, who now runs an animal shelter in the provincial capital. “Shooting stray dogs is not the solution. We only need measures to control the population of strays,” said Masood.

Health experts at Lady Reading Hospital, Peshawar’s oldest medical facility, believe dog bites can be deadly. “Deep dog bites can cause rabies which can lead to death if the animal is not vaccinated,” said Dr Akheer Jan.

Rabies, a lethal disease, enters the human body at the time of a dog bite. After entering the human body, the deadly virus travels toward the brain. Once it reaches the brain, it causes salivation and convulsions.

“In most cases, after symptoms appear, death becomes inevitable,” said Dr Jan.” But in some cases, he said a series of shots, given before symptoms appear, can stop the virus in its tracks. Animal welfare experts believe authorities should concentrate on spaying and neutering campaigns, instead of mass culling drives in province.

In July 2019, more than 350 dog bite victims checked into hospitals across the province in Peshawar, Mardan, Charsadda, Nowshera, Khyber district, Mohmand, and Shabqadar. Another 380 checked into Lady Reading Hospital in Peshawar for treatment.

While these free-roaming canines proliferate across the province, benefiting from the absence of a policy to deal with the issue, citizens continue to pay the price for the government’s inaction.

“The cost of treatment for a minor dog bite is over Rs 3,000,” said Amjad. A few months ago, Amjad’s daughter was bitten by a stray. “The government should vaccinate stray dogs and launch sterilization campaigns,” he urged. While officials continue to ignore the issue, activists like Zeba Masood, cruise around the city, taking dogs to the shelter for vaccinations and sterilizations.

But in a city like Peshawar, where every neighbourhood has its stray residents, charities alone cannot solve the problem.

According to the WHO estimates, most of the deaths occur in Africa and Asia because of rabies.

Despite the odds stacked against them, animal welfare activists like Masood still reject mass culling of strays. Her small animal welfare venture plans to launch a new campaign to address the growing issue of Peshawar’s untamed canine population.

“We plan to launch a new campaign called the Trap-Neuter and Relief program (TNR). It has been successfully tested in Turkey, Azerbaijan, and Malaysia,” Masood added. 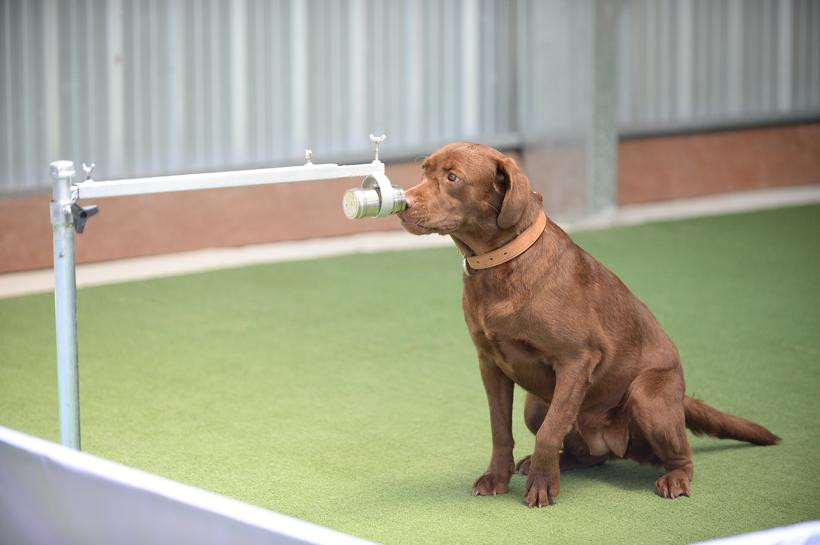 Reema Hannan, an animal lover in United Kingdom has initiated fund raising campaign for an animal shelter in Peshawar, the only sanctuary for maltreated, beaten, injured and starving stray dogs in the city.

Having roots in the historic city of Peshawar, Reema, an expatriate Pakistani young girl, recently participated in a marathon at Manchester to raise funds for Lucky Animal Protection Shelter of Peshawar, informed Zeba Masood, founder of the sanctuary.

“Reema competed in 26.2 mile marathon while wearing the shirt bearing tag of LAPS (Lucky Animal Protection Shelter),” she said. Zeba herself is a Pakistan origin US national.

Reema had visited LAPS along with her mother in 2020 and witnessed the care and treatment we are providing to animals, mostly stray dogs, she informed.

She recently contacted us and informed about her intention of raising funds for LAPS by participating in a marathon at Manchester.

After getting my consent, Reema not only participated in race but also approached her friends and acquaintances to apprise them about animal shelter home in Peshawar and collected donations.

It is encouraging to see that youngsters have feeling of love and affection for stray animals who are in dire need of care for getting proper food besides medical treatment, Zeba remarked.

She said LAPS was established in 2017 and was providing shelter to around 172 dogs some of which arrived in a very bad conditions due to critical wounds and illnesses, but now are doing well at the shelter.

We have stopped receiving healthy animals at the shelter home, but did not refuse injured or ill animals who are provided proper treatment, food and shelter.

“People did not adopt dogs that is why burden on shelter home is increasing as people keep on bringing their ailing pet animals here,” claimed Zeba, adding that recently a person brought a Labrador dog to the shelter in a critically injured condition.

One thought on “Humane Approach to Handle Stray Dogs in KP”