Amid the wait for a serious government initiative to tackle the problem of stray dogs in the province, the Indus Hospital (IH) has seen a spike in dog-bite cases over the past three weeks while a suspected case of rabies is currently being looked after at the National Institute of Child Health (NICH).

Recently, a six-year-old girl also underwent surgery at the NICH for serious facial injuries caused by a dog.

“On an average the hospital receives 20 to 30 dog-bite cases daily. But, over the past three weeks, we are getting 30 to 40 such cases daily from all over Karachi,” said Mohammad Aftab Gohar, the manager of the rabies prevention and training centre at the IH.

The rise in cases was, perhaps, linked to dogs’ breeding season as it happened periodically, he added.

In 2019, some 7,000 dog-bite cases were reported at the hospital with four cases of rabies, whereas in 2018 over 5,000 similar cases were registered at the facility.

“We are seeing an annual increase in the number of dog-bite cases, which could be because of two reasons; increasing awareness among people about our facility providing free-of-cost treatment round the clock and growing dogs’ population,” he said, adding that 40 to 50 per cent of the dog-bite victims were under 15, often involving a history of provocation.

Around 1,000 dog-bite cases were registered at the NICH in 2019 with two deaths from rabies, while at least 25 lives were lost to rabies in Sindh in 2019.

The government is yet to finalise and approve an over Rs1 billion programme focusing on vaccinating and controlling population of stray dogs. The project is envisaged to be implemented in three years.

While many health practitioners believe that immediate relief could only be provided with mass culling of dogs as their numbers have increased manifold due to worsening sanitary conditions across Sindh, others say the government should follow WHO recommendations.

The one-health approach of WHO seeks elimination of rabies universally by 2030 with the help of mass dog vaccination and controlling [their] population through birth control measures (as studies have proved killing stray dogs as an ineffective method to end rabies).

Sindh Health Minister Azra Pechuho in August 2019 informed the Sindh legislature that more than 92,000 cases of dog bite had been reported across Sindh in 2019; that the tension with neighbouring India had created a serious shortage of its vaccine as a Chinese company had closed its operations.

“Dog bite is a serious problem and rabies is highly dangerous and such matters need serious thought to strategise our plan to protect our people,” said the minister while speaking at a private resolution moved by PTI’s Seema Zia.

Her resolution demanded that the Sindh government ensure availability of uninterrupted supply of anti-rabies or dog bite vaccine at all health facilities across the province.

Dr Pechuho said rabies was not caused by just a rabid dog, but in many parts of the province it was also inflicted by rabid jackals, etc.

She said 92,159 cases of dog bites had been reported from across the province till June 30; while the hospitals had 6,029 vials of vaccine in stock. “The Chinese company from where we would purchase this vaccine has been closed down because rabies had been eradicated in China. In India, we cannot get this vaccine at present because of serious constraints over Kashmir issue,” said the minister.

She said the controlling dogs’ population was the only solution to get rid of the life-threatening infection.

Commenting on certain recommendations that were furnished by various lawmakers earlier, Dr Pechuho said even after vaccination, it was hard to know about which dogs were vaccinated because they were social animals which moved in packs. She said most victims of dogs were children because children were physically vulnerable to save themselves from dangerous attacks by stray dogs.

She said vaccinating or neutering dogs were the methods that were not cost effective. Still, efforts were needed to be taken to control alarming increase in their population.

She said the local government ministry and the municipal bodies in Sindh had the primary mandate to take up the issue, which had become terrifying nowadays.

“The increasing population of dogs is much graver problem in our urban areas since cities host congested populations that could not live when so many stray dogs were roaming free in our neighbourhoods. This issue has turned into a menace now,” said the minister.

She said she held great respect for animal rights activists, yet, the problem had to be sorted out by keeping in all nuances in mind.

The health minister refuted the statements by certain members from the opposition benches which claimed anti-snake venom vaccine was not available in most hospitals including the ones located in Dr Pechuho’s constituency in Benazirabad. She said it was universally available across the province.

Earlier, mover of the resolution, Dr Zia, said the government should invest in sterilising the stray animals, which was cost effective than spending money on vaccination against rabies.

She said instead of killing dogs, the authorities should focus on sterilising them. She referred to a neighbour of her who was an animal lover who had domesticated many stray dogs roaming in their vicinity.

“More than 100 cases are being reported in the city’s hospitals alone,” said Dr Zia.

Her colleague in PTI, Khurrum Sher Zaman said more than 80 dogs strayed in every ward of the city’s 235 union councils.

He claimed that barring Jinnah Postgraduate Medical Centre and Ruth Pfau Civil Hospital Karachi, vaccine for dog bite was not available in any government-run health facility.

MPA Allah Bakhsh Talpur said his constituency in Badin district was also seriously affected by the incidence of dog bite. He added vaccine for dog bite was not available in the rural health centres. Muttahida Qaumi Movement-Pakistan’s Mangla Sharma claimed that most cases of dog bite were reported from Benazirabad and Larkana districts.

PTI’s Imran Ali Shah said the Sindh government should look elsewhere to purchase anti-rabies vaccine, if it could not be purchased from India.

He said he had spotted 29 dogs around Ruth Pfau CHK during a recent survey of the hospital.

Grand Democratic Alliance’s Nand Kumar said increasing incidence of dog bite cases was a clear indication that the government had failed in its job to protect people from all sorts of dangers.

He said the resolution should also include a similar demand for universal availability of snake bite venom vaccine.

PTI’s parliamentary leader Haleem Shaikh claimed vaccine for dog bite and snake bite was not available in the constituency of the health minister.

‘Dogs should be exported to the countries where people eat them’

His colleague Jamal Siddiqui said stray dogs were useless animals, who could only harm humans; adding colonies of stray dogs were present everywhere in the province. He said those dogs should be caught and exported to the countries where people ate dog meat.

During the altercation between Minister Chawla and some PTI members, the chair put the resolution before the house and got it passed unanimously. 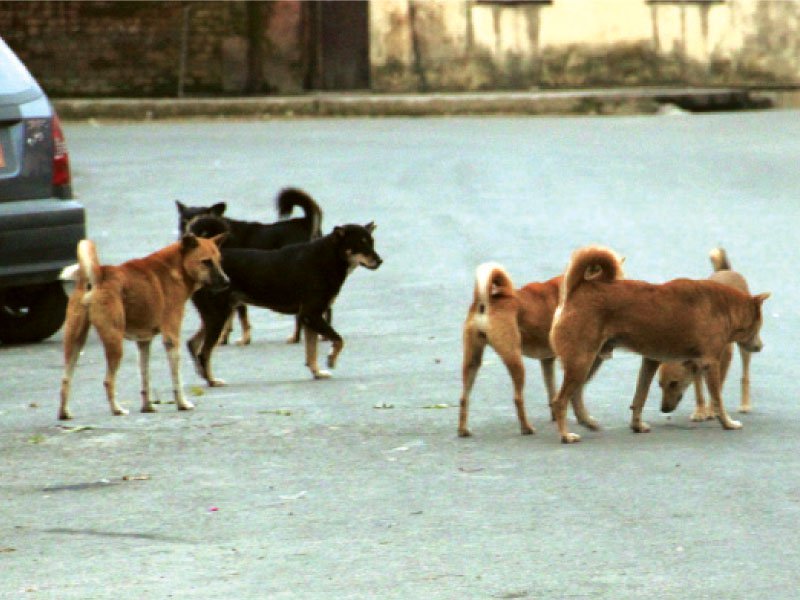 On Nov 15, 2019, a minor boy was attacked by six dogs in Larkana. He was brought to the National Institute of Child Health (NICH) in Karachi.

The victim, six-year-old Hasnain Bughio, son of Ghulam Hussain, was attacked near his home located in Habib Bughio village, some five kilometres from Larkana city.

Rescued by villagers, Hasnain was brought to the Chandka Medical College Hospital, Larkana, in critical condition. “He was unconscious when we found him among the dogs,” narrated his uncle “He was brutally attacked and his face is badly disfigured.”

Owing to the severity of the injuries, the doctors in Larkana referred the injured child to Karachi after administering first-aid. He later died in early Dec after fighting for his life for weeks.

Larkana, much like the rest of the province, has seen a surge in the number of dog-bite cases. Recently, the Sindh High Court also took notice of the uptick in the cases and ordered the Sindh government to take immediate steps to control the population of stray dogs.

According to statistics collected by officials of the Dog Bite Centre in Larkana, which is not more than a small room in the Commissioner’s Office, over 13,000 cases of dog bite have been reported from the five districts of Larkana division since October 1.

Of these, around 3,000 cases were reported in Larkana city in the month of October alone. “We have enlisted over 1,400 cases in the last 15 days,” Dr Noor Din Qazi, the in-charge of the centre.

“We deal with at least 100 cases on a daily basis,” Dr Qazi continued. “There is no dearth of vaccines but we don’t stock them at the centre,” he explained, adding that the centre was currently being provided 50 vials of the anti-rabies vaccine every day. Each vial has enough vaccine to be administered to two victims.

Another official said that there was a shortage of ARV earlier, but the supply was ensured after the court orders. “There is no shortage of vaccines but that is not the solution. Why aren’t concrete measures being taken against stray dogs? Their population keeps multiplying.”

Meanwhile, the provincial health minister, Dr Azra Pechuho, drew flak on social media and civil activists when she advised children not to tease stray dogs. The statement came after the health minister’s visit to NICH, where she had gone to see Hasnain after his ordeal was highlighted by the media. “They stray dogs attack when they are annoyed,” said the health minister, advising people to stay away from stray dogs.

On the other hand, the Sindh government claims to have formulated a plan to curb the growing population of stray dogs in the province. “There will be no stray dogs in Sindh after five to eight years,” claimed local government secretary Roshan Ali Shaikh.

According to him, a grand operation will be launched to vaccinate stray dogs. “They will also be tagged,” he explained. He said that in the meantime, the conventional method of killing dogs was also being carried out across the province. “We cannot kill all the dogs. That is a cruel way,” he said, adding that Sindh was the first province to launch a modern technique to deal with the issue of stray dogs. “The involvement of government officials in this project would be at the minimum level,” he said.

The Secretary said that public awareness is one of the major components of the plan. “We need to understand our attitude towards animals. They react badly when annoyed.”