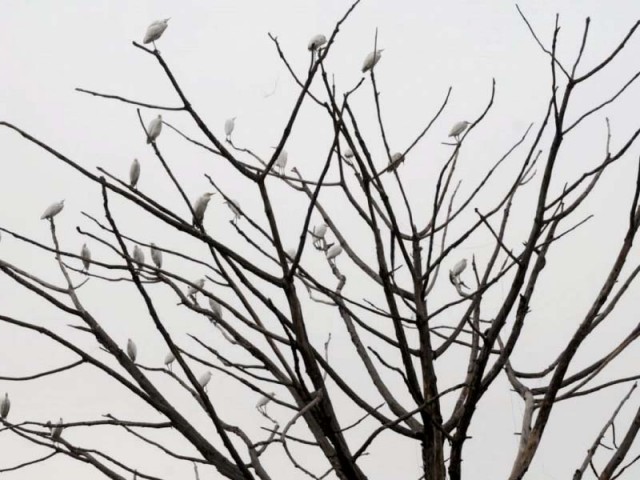 Migratory cranes seen perched on a tree in Rawalpindi.

Migratory birds are slowly making their way to Islamabad and Rawalpindi in November, leaving behind colder climates of Siberia. These seasonal guests would stay in Pakistan until the onset of warm climate in the country to begin in March or April next year.

These winged immigrants can be spotted at rivers, lakes and waterways scattered across Rawalpindi and Islamabad including Ayub Park, Chuhan Dam, Rawal Dam and such places.

These birds not only make a place adorable but also create a positive impact on the agricultural environment across the country as they feed on different crop-harming insects while their manure served as a natural fertilizer for the soil.

Migratory birds, though escaping harsh Siberian winter, don’t get a warm welcome in Pakistan. Hunting waterfowl is an annual sport in the country. Punjab Wildlife Protection Department Director Naeem Bhatti had highlighted that migratory birds begin to arrive in Pakistan around September.

However, if there is rainfall in the colder regions, they begin to arrive around early November. ,

The number of migratory birds coming in from Siberia has declined drastically over the past three decades.

Around 150,000 birds, including local and migratory waterfowl, were estimated to have landed at 12 aquatic ‘stopovers’, which is 70% less than in 2017-2018, according to a survey conducted during the winter season.

The migratory birds usually arrive in Pakistan at the end of August and begin leaving in February. The birds are all gone by March.

As the temperatures in Siberia drop below -30 degrees Celsius, the birds make their way to warmer climes.

The route of the migratory birds is called ‘Flyway Four’ or the ‘Green Route’ in Pakistan. The migratory birds fly From Siberia, over Afghanistan and into Pakistan, where they track the Indus River on the way to Sindh.

Sindh Wildlife Game Officer Rasheed Ahmed Khan said that Pakistan has 19 sites where birds land, 10 of which are located in Sindh.