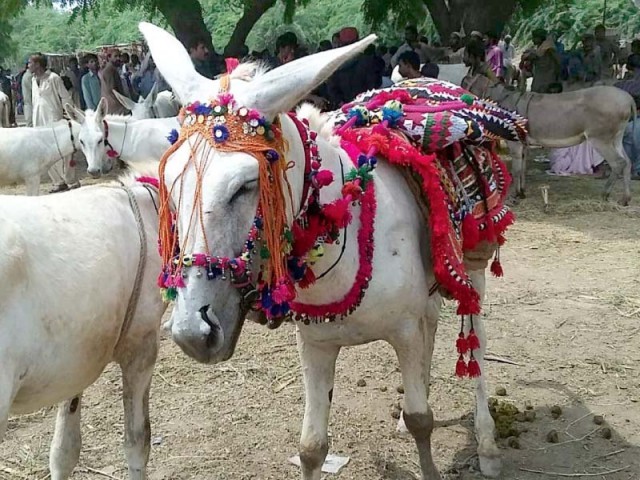 The donkeys are given a persona of their own which is often reflected in their unique names, such as Mahduri, Sheela, much to the amusement of visitors. They are also adorned with tassels, ribbons and the like, to look more attractive for buyers.

They came in all shapes and sizes. White ones. Grey ones. Brown ones. Even black ones, although they turned out to be a darker shade of brown on closer inspection.

It was the donkeys’ day in September 2019 and enthusiasts from across the country had gathered in a large field in Tando Ghulam Ali – a small town in Badin district some 70 kilometres from Hyderabad – which has been hosting the annual three-day donkey festival for the past 70 years. Most of the traders hail from Karachi, Badin, Thatta, Tando Muhammad Khan, Tando Allah Yar, Tharparkar and adjacent districts

The donkeys are given a persona of their own which is often reflected in their unique names much to the amusement of visitors. A few names like atom bombs, rocket launcher, F-16, Kalashnikov, Madhuri, Sheela, Dilpasand, Pawan and Sindh Malook, stand out among the herd.

“It Madhuri was black in 2018 and this time it’s white and I like the name it got this time,” said Allah Rakhio, a buyer in the market. He said that he has been visiting the place for the past 10 years and interacting with various donkey-lovers. “It also gives me in-depth information on how people in other areas care for these innocent animals,” he explained.

A few local species are commonly found in the market such as Lasi, Irani, Laari, Thari. These are local breeds which, according to visitors, are found across the province. 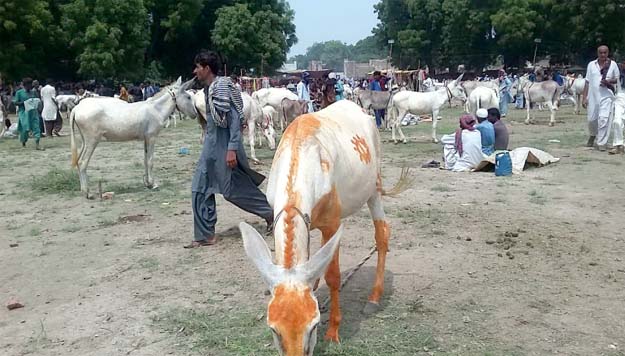 Increase in prices has also affected the donkey market much to the dismay of buyers. The minimum price this year remained at around Rs 20,000 for a common donkey and the maximum price went as high as Rs 200,000.

The market is set-up on a plot of four-acre land which is the property of MNA Mir Ghulam Ali, the son of former Sindh chief minister Mir Bandeh Ali Khan.

“I visit this market every year,” said Mohammad Ali, a resident of Lyari. “I learnt [at the market] how many species of donkeys are found across Pakistan,” he added.

Ali said that many donkey lovers and those who want to purchase young foals usually wait for this market to set up. “This is an awesome place where you find your choice easily,” he explained.

History of the market

Sharing details of the market’s history, a local journalist, Mohammad Suleman, said that it was just like a festival and has been arranged for years. “No one is sure when it actually started – might have been a century ago. Some elderly traders say it’s the only donkey market in the Subcontinent,” he said.

Suleman said that people who would visit Matli, Tando Ghulam Ali and its adjacent areas to attend mourning processions during Muharram used to come from far-flung areas. “There was no transportation and the only form of conveyance those people had was the donkey,” he narrated. “Hundreds of donkeys were chained in an area and people started selling and purchasing donkeys and now, it continues.”

Visitors at the market complained that the venue of the market was far from major cities such as Hyderabad and Karachi.

“Donkey markets should be patronised by the government and buyers and sellers must be supported,” said Muhammad Anwar, a visitor from Thatta. “There is an opportunity for people who want to invest in this field. We can export donkeys to China and other countries,” he added.