“Sensational!” the timekeeper called as Elvis pounded across the finish line and bounded into the arms of his 13-year-old owner, Emma Pollex, who had run ahead, shaking a small, zipped bag packed with treats.

Elvis was one of the star pugs on a recent sunny Saturday at the Hamburg N.W.R. dog track on the outskirts of the northern German port city.

“He’s really fast,” said Emma, and likes to run, so much so, she said, that Elvis didn’t even need to train before going up against the 49 other competitors.

Along with Joschi, Campino and dozens of other curly-tailed pugs, Elvis was competing in what has become a regular effort in Germany to blow up the breed’s reputation as committed couch potatoes.

Sometimes, the reputation seemed justified. Campino needed a push just to get him past the starting line. Lulu stopped midway for a sniff before dashing backward, then turning around and casually trotting across the finish, taking a leisurely 32 seconds.

“This isn’t a competitive race,” said Angelika Schmorr, Lulu’s owner. “We are all here just for the fun of it.” 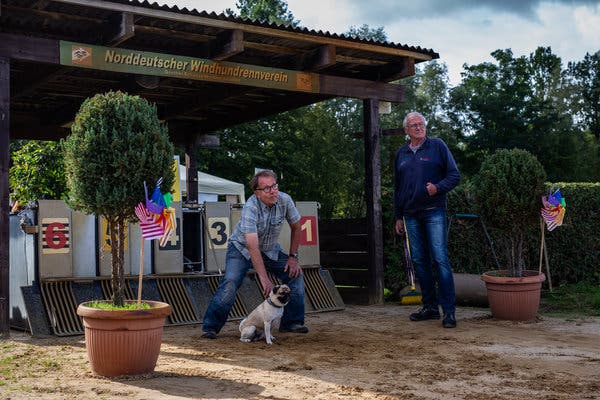 A pug getting ready to race on the Hamburg N.W.R. dog track, where greyhounds and whippets generally compete. 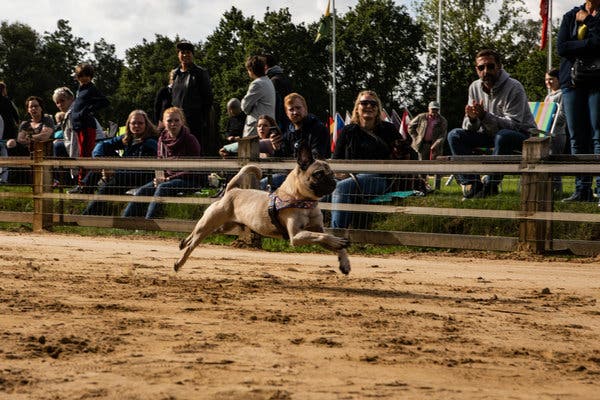 In Hamburg, going for the gold.

In the country that gave the world the German shepherd and the Doberman pinscher, short-legged, smashed-nosed pugs, called “Mops” in German, would seem out of place. But the animals have long been celebrated across this country for their loyalty and clown-like temperament, and as subversive symbols.

Introduced to Europe from China, pugs made their way to Saxony in eastern Germany in the 18th century, where they became the mascot of a group of excommunicated masons who called themselves The Order of the Pug.

Around the same time, a designer at the royal Saxon porcelain factory in Meissen began casting pug figurines that became popular at court. They are still produced and sold today.

More recently, the German comedian Vicco von Bülow, known by his stage name Loriot, has boosted the breed’s popularity in this country, featuring the dogs in his work and declaring, “A life without pugs is possible, but meaningless.”

As the dogs’ popularity has grown, events for pug owners and their animals have sprung up across Germany. While many of these feature “races,” the winners are as much the pets who display their particularly pug-like attributes — which does not necessarily include speed.

A decade ago, Thomas Zupan and his wife, Beate, pug breeders, organized the annual International Pug Meeting in Berlin. It features a 50-yard dash timed with state-of-the-art photo finish equipment and prizes for the fastest — and the slowest — pugs.

The event has drawn participants from across Europe and spectators from across the city. But this year, the city animal welfare authority canceled the pug race at the last minute because of extreme heat, although the gathering still took place.

When Mr. Zupan announced the dogs would not be running, boos and groans went up from the owners of 95 pugs poised to compete — who were unleashed and happily tearing about a vast fenced-in yard that was supposed to serve as the racetrack. 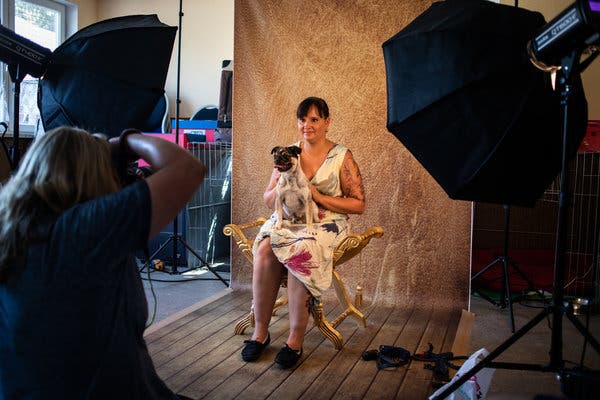 Ready for a closeup in Berlin.

Days earlier, the German branch of People for the Ethical Treatment of Animals had warned that the dogs’ snouts and palates were “too short, which makes it difficult for them to breathe,” even in cooler temperatures.

Many owners blamed the race’s cancellation on the warning, and said the activists failed to understand their fun, and their dogs.

“A pug will know if they want to run or not,” said Ursula Streich, owner of Hanna. “If they don’t want to run, then they will just lie down. You can’t do anything about it.”

Ashley Reinhart also said canceling the race made no sense. She was at the event with Kirby and Thor, two rescue pugs. The animals had made their way across the Atlantic with Ms. Reinhart and her husband when they moved earlier this year from Pennsylvania to Lübeck, Germany, for work.

“It’s very unlikely that any pug parent would put their pug in harm’s way,” said Ms. Reinhart, who refers to herself as the mother of Kirby and Thor.

“These dogs are like your kids,” she added, sitting in a camp chair beside a small tent set up to shade her dogs. “If they can’t handle the heat, you would know and as a responsible parent, handle it accordingly.”

Neither Thor, who has use of only three legs, nor Kirby had been registered for the race. Like their owners, they had come along just for the camaraderie. 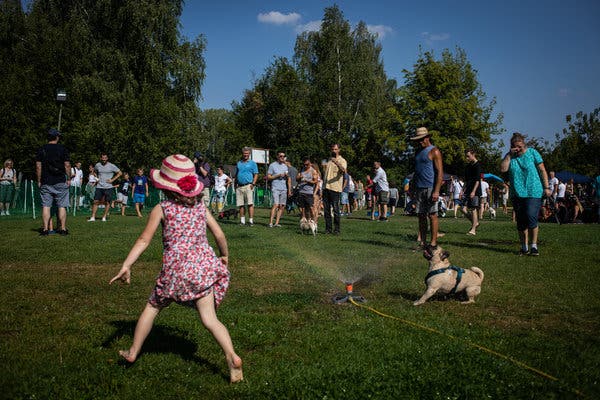 “These dogs are like your kids,” one pug owner said.

Thor and Kirby have their own Instagram account, @expatpugs, so friends back home can keep up with their adventures in Germany. They join other pug social media stars, like Hamilton Pug and Doug The Pug, who have captured the attention of millions.

But long before Twitter and Facebook, or even Frank the pug’s debut as an alien disguised as a dog in “Men in Black,” Germans had their own set of pug stars, Meier and Pöhlmann.

In 1971 the country was glued to TV sets, watching as a pair of pugs descended from a spaceship to leave their paw prints on the face of the moon, or at least a low-budget copy of them. The ability of the “astronauts,” in the sketch by the comedian Loriot, to survive in outer space without special suits was attributed to their “new breathing technique” and “unbelievable resistant body form.” 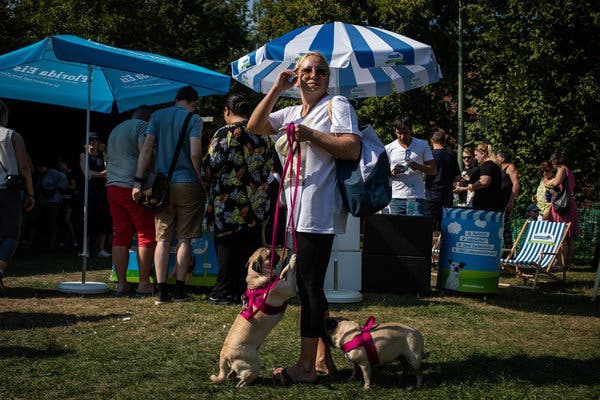 The effort to breed extremely flat faces in pugs has resulted in an increase in breathing difficulties and illnesses.

In 2018, Emma was the most celebrated pug in Germany, called the “Usain Bolt of Pugs” after winning her third straight race in Berlin with a record time of under six seconds. Like Elvis, this year’s winner in Hamburg, Emma is a variety of pug in Germany known as an “Altdeutsche Mops,” or “Old German pug.”

Ms. Schmorr, the owner of Lulu, the pug who took a more circuitous route to the finish line in Hamburg, confessed that she was uninterested in the breed, until she took in the pug that had belonged to her mother, after her death.

That was six years ago. When that pug died, she knew she needed another one.

“Pugs don’t leave anyone indifferent,” she said. “Either you hate them or you love them — and if you do, you can’t live without them.”