Lessons Without A Leash 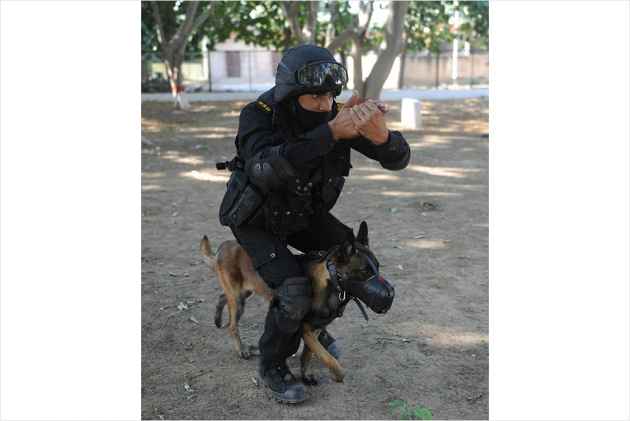 The cuckoo’s call even before the sun has risen in the morning is often the only sound that precedes Gracy’s walk towards the training centre. The golden Labrador waits patiently by her kennel in the National Sec­urity Guard’s recently established K9 tactical training school in Manesar, Haryana, for her handler constable Amit Sharma to take her to the ground for the day’s exercises. A swift “Gracy chalo” has the dog ­bounding towards Sharma, and they walk, leg-to-leg, in the direction of the huge training ground.

The trainer doesn’t use a leash to guide Gracy and simply gives verbal cues which she obeys, a stark ­contrast to the usual dog-trainer relationship in canine ­training units. This, Sha­rma tells Outlook, is part of the new techniques rolled out ­und­er the augmentation course for state police and the ­Central Armed Police Forces (CAPFs), which started in ­Manesar this year. The course aims at enhancing exi­sting abilities to detect ­explosives, and dogs are trained with the goal of making detection more efficient in tough ­situations and terrain.

The 12-week course aims at training dogs to respond to commands through verbal cues alone, enabling them to work more efficiently off-leash. It inducts dogs that have already had initial training at the various canine training schools across the country. This, jokes an officer, is a post-graduation for the canine recruits of the police and the CAPFs.

So how is this any different to house dogs that often follow commands without a leash. Lt Col P.K. Chug, the commanding officer of the K9 unit, says that the difference is stark. While house dogs are trained to follow a few specific commands under sanitised situations, canines trained for the police forces face a plethora of different environments and distractions.  “Until now, dogs in the civil and state police forces have followed commands by a pull of the leash. Training them to follow commands off-leash will facilitate to stretch the ambit of operations involving dogs and more importantly provide a safe standoff distance between the dog and the handler in INS­tances of bomb detection,” he says. Dogs are trained not only to identify the smell of explosives but also to sniff out  and find explosives from amongst other, stronger aromas. 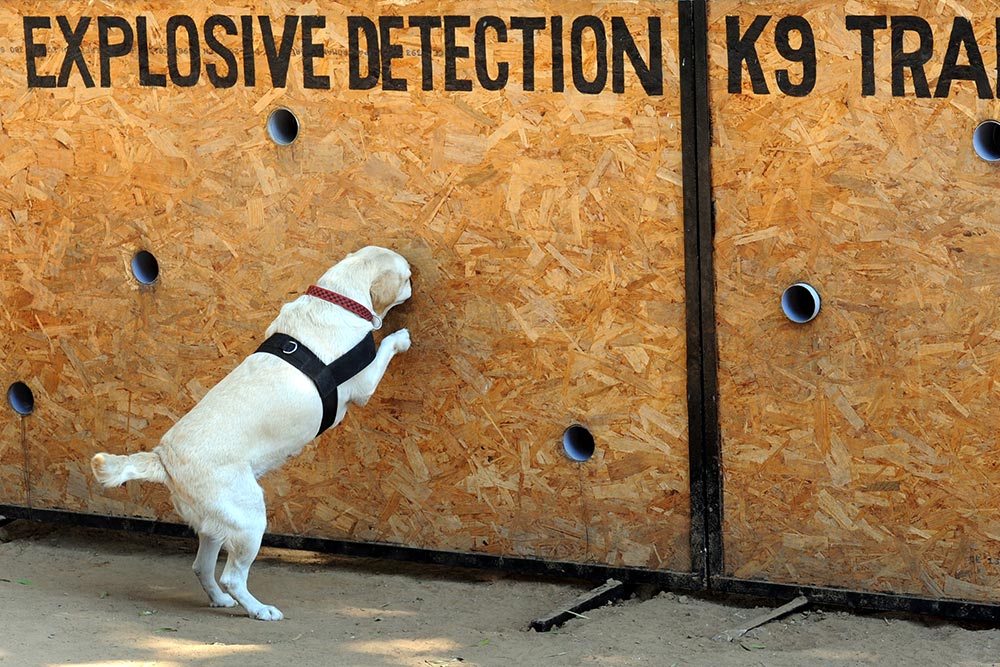 I SMELL SOMETHING DEADLY: Labradors specialise in explosive detection

Gracy begins her training early in the morning with a drill, alongside 19 other dogs and their handlers. These are a mix of Labradors for explosive detection, Belgian Shepherds for attacks and Cocker Spaniels for counter-hijack and bomb alert training. Dogs are trained to be prepared for different scenarios, including crowded marketplaces, metro stations and airports. The trainers and their instructors must discard the established tactics for getting the dog to follow commands. Instead, they must rework the system so that it is based on verbal commands and rewards the dogs for following such commands (operant conditioning). “Pushing a dog with a leash like earlier to detect the scent of an explosive is no longer an option. Thus, a reward-based system works since the dog knows a detection of an explosive without being guided by a leash will be rew­arded by food or a toy ball to play with,” says  K9 school 2i/c Lt Col Dheeraj Mehta.

This also requires the dogs and trainers to build a strong and unbreakable bond, which is why trainers in most of the state police forces are matched with their dogs from the time the dogs turn three months old. This process, which is known as “marrying up”, is one of the most crucial aspects of training a dog. “When you marry up with a three-month old pup, you can mould it to have the kind of personality you want,” says constable Jadav Chetan, trainer of the two-year-old ­explosive detector dog Arya, who he has been with since she was a puppy. Arya, a CISF dog, is  also working at the Delhi metro as an explosive detector during her training at the centre. “The techniques of training have really proved to be effective with her performance,” says her handler. 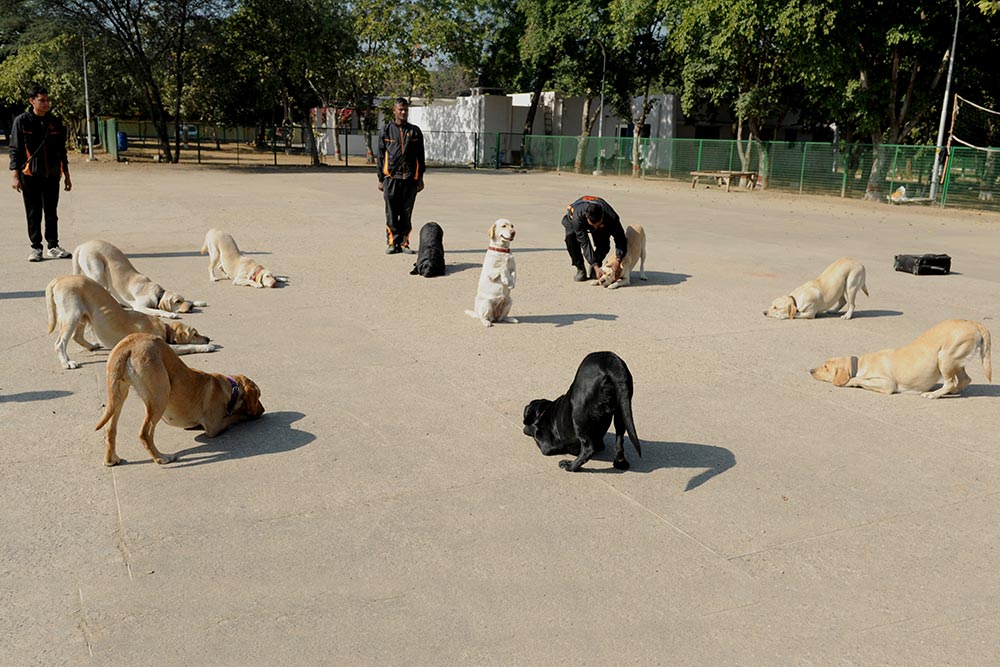 RINGA RINGA DOGGIES: Dogs and handlers train ­together at the NSG Camp
The need for such methods of training became more evident after massive terrorist attacks such as 26/11 and the Pathankot ambush. “The availability of well-trained off-leash sniffer dogs in a situation like that would have made a big difference,” says Lt Col Mehta. In the case of the Mumbai terror attacks for instance, off-leash dogs could have been sent inside the Taj to estimate more accurately the position of the terrorists and formulate strategies. The off-leash met­hod has also enabled the K9 training unit to experiment with new equipment. They are procuring special ­infrared-enabled glasses, fitted with dawn cameras, for the dogs to wear. This device can record whatever the dog sees and send the images to a screen the handler has. Additionally, once the technique of operant conditioning of the dog is mastered, the unit plans to procure headsets for the dogs, which will enable handlers to give them instructions from 200-300 metres away; most of the world’s canine training units are yet to achieve such a feat.

Teaching old dogs new tricks will also require their ­trainers to relearn everything. The course thus concentrates on ­providing separate classes for the trainers to familiarise ­themselves with the new methods and then to ­implement them. “We are learning not only to rewire the dogs’ ­understanding but also our own,” says constable Ashwini Kumar from the Chhattisgarh police. “The first thing we are taught here is that a hungry dog (as in the ­morning hours) is the best to train under the reward-based system; you train them to follow scents with the promise of food and they will be more eager to get the reward,” he says while patting his three-year-old jet-black Labrador, Mali.

The day for Mali and Kumar is spent on training and ­bonding. All this will  soon come to an end when they are dep­loyed to their posting, where all Mali’s new skills will be put to the test. Until then, as soon as Kumar signals the end of the working day, Mali bounds up and runs to the kennel, ­­happily snapping up the ball Kumar gives him as the day’s reward.