A 34-foot long whale that washed ashore dead on the beach in Gwadar in April 2019 was quietly buried by municipality workers before its body could be examined by experts.

“Perhaps the efficiency shown in burying the foul-smelling decomposed body was due to close proximity of the carcass to a security check-post,” they said.

There were conflicting claims about the whale’s identity: the World Wide Fund for Nature-Pakistan (WWF-P) reported it as the calf of a blue whale while a marine biologist working with the Gwadar Development Authority identified it as a Bryde’s whale.

The assessment was based on different pictures of the whale apparently taken by security personnel. Reportedly, no fisheries department official has visited the site despite getting information about the incident.

“We confirmed that it’s a calf of the blue whale after sharing its picture with other experts,” said Mohammad Moazzam Khan, a representative of the WWF-P and also the president of the Pakistan Whales and Dolphins Society.

The cetacean, he said, was already buried before the WWF-P team could reach there.

“There are different speculations about how it died. I believe that it died after getting entangled in a fishing net,” Mr Khan said, arguing that there was no evidence of a ship strike.

The WWF-P team, he said, had dug the burial site and took some meat samples which would be shared with international experts for DNA analysis.

He said that fishermen searching for ambergris in the whale’s stomach damaged the carcass but couldn’t find any since the precious solid waxy substance was only found in the intestines of a sperm whale.

A dead specimen of the same species, according to Mr Khan, was found floating in 2014 in the Khuddi creek, about 39 kilometres southeast of Karachi.

“A giant blue whale was spotted along with its baby off Churna Island, Balochistan, last year. That was the first live sighting of the blue whale,” Mr Khan said.

The species is listed as endangered in the International Union for Conservation of Nature (IUCN) Red List and its global population today stands at around 10,000 to 25,000.

However, Abdur Rahim, assistant director environment of the GDA and also a marine biologist, was of the opinion that it was an adult Bryde’s whale.

“I confirmed this identification with my foreign colleagues. Both blue whale and Bryde’s whale belong to the family of baleen whales, also called toothless whales, and there are minor differences in their features,” he explained. He said he didn’t get any information about fishermen damaging the carcass.

“The carcass was old, perhaps three days to a week. It apparently washed ashore on Monday night and was spotted on Tuesday morning. Nothing could be said conclusively about the whale’s death,” he said, adding that a Bryde’s whale was found dead two years ago in Gwadar.

All cetacean species are protected under Sindh and Balochistan laws and all whales fall in the Appendix 1 category of the Convention on Internatio­nal Trade in Endangered Species of Wild Fauna and Flora.

According to experts, cetaceans are significant since these mammals are key species in the ecosystem. They reflect the number and diversity of fish stocks and are indicators of a healthy ecosystem.

The first-ever baseline study on the marine cetaceans found in Pakistan’s waters was made public in 2008. The whales recorded during this study included Bryde’s whale, Cuvier’s beaked whale, the fin whale, the sperm whale and the well-known hump-backed whale.

In Nov 2019, a Bryde’s Whale Found Dead near Balochistan Coast 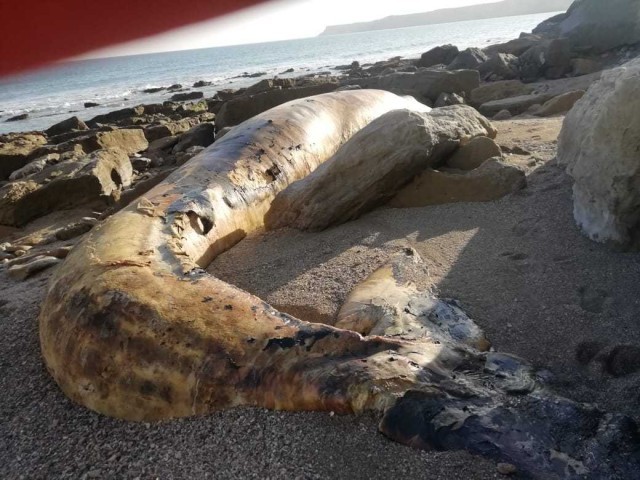 Entangled in a fishing net, the fishermen couldn’t rescue it because of its weight.

The 13-foot-long Bryde’s whale was found at a remote rocky shore near Gunz, along the Balochistan coast. The fishermen said that the live specimen was seen entangled in a fishing net offshore Daran on November 26. They said that an attempt to rescue the animal was made but they couldn’t succeed because of its weight. 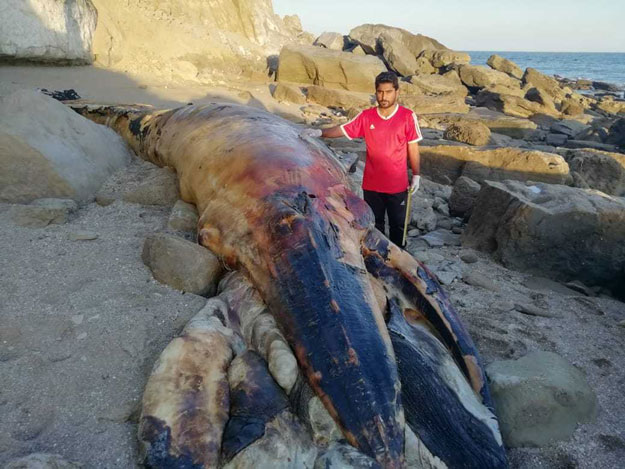 Officials of the World Wide Fund for Nature-Pakistan (WWF-Pakistan) said they reached the spot as the local fishermen informed them but couldn’t find the animal. After a search operation, the whale found was lying dead on an isolated rocky beach called Chill in the west of Gunz near Jiwani.

They said that the whale is one three baleen whales found in Pakistani waters. The other two are Blue whale and Arabian Humpback whale.

Sudheer Baloch, WWF-Pakistan coordinator based in Jiwani, said that the whale became entangled in a gillnet deployed by local fishermen to catch Indian mackerel near Gunz.

Expressing his concerns over the accidental mortality of the Bryde’s whale, Muhammad Moazzam Khan, Technical Advisor of the WWF-Pakistan, termed it a grave concern for the conservation community around the world.

The Bryde’s whale is one of small baleen whales known to be distributed in tropical and subtropical waters worldwide.  Although this whale is categorised as a species of least concern, but taking into consideration its very small population in Pakistani waters, urgent steps are required for its conservation. Currently all cetaceans, including whales and dolphins, are protected under the fisheries legislation of Sindh and Balochistan.