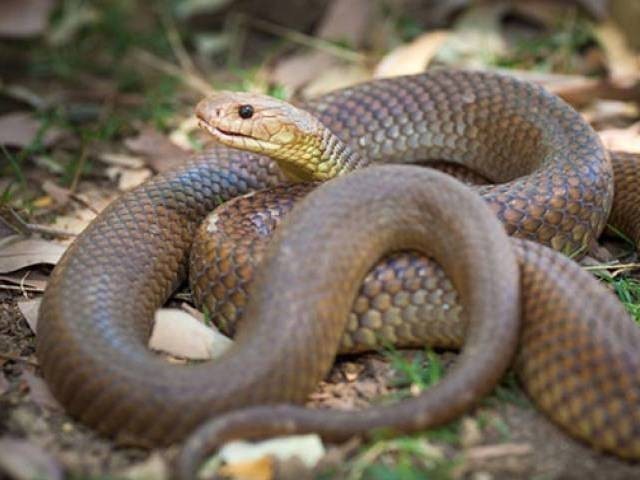 The venom itself is extracted by pressing the top of the snake’s mouth, where venom glands are located, against this lid.

The mere thought of snakes is enough to send shivers down the spines of most people. For many, the reptile’s venom conjures grotesque visions of instant death.

What many do not know, however, is that this venom itself is vital in producing antidotes to treat snake bites. The venom of one snake species may hold the key to nullify the effects of another snake’s venom.

At present, Pakistan’s only anti-snake venom department exists in Islamabad’s National Institute of Health (NIH). The institute has a snake room with 3,000 to 3,500 snakes which cater to the anti-venom needs of the entire country.

“This is the only department of its kind in Pakistan. It prepares 30,000 vials of anti-venom every year, but this can only treat a fraction of snakebite cases in the country,” NIH Executive Director Brigadier Dr Amir Ikram.

Pakistan is home to mainly four types of venomous snakes – namely cobras, kraits, saw-scaled vipers and the Russell’s Viper – which are by and large prevalent in Sindh and Punjab provinces.  The World Health Organisation (WHO) lists them amongst the highest risk category in the geographical range.

Extracting snake venom, though, requires utmost care and patience. Any misstep or negligence on the worker’s part could turn into a matter of life and death.

To begin extraction, workers carefully hold snakes by their necks and tails. The snake’s mouth is then held open, exposing its fangs so that they can be jammed into the specially designed lid of a glass receptacle used to collect venom.

The venom itself is extracted by pressing the top of the snake’s mouth, where venom glands are located, against this lid.

“We wear ordinary surgical gloves while extracting venom,” NIH anti-venom department worker Maqsood Ahmed told Daily Express. “We have been provided padded gloves by NIH. While these offer considerably better protection, they make it very hard to keep a hold of the snakes,” he explained.

Once the venom has been extracted, the snake is fed a concoction of milk and eggs through a syringe. “Even this step is very dangerous for a worker,” said Maqsood. “A snake may become irritated and aggressive upon extraction of venom and may try to bite the handler.”

After being fed, snakes used for extraction are allowed to rest for 15 days so that their glands can begin producing venom again.

Meanwhile, the venom extracted from the snakes is injected into horses specially kept by NIH for anti-venom production. The horses’ bodies produce neutralising antibodies to counter the venom in their bloodstreams.

To develop polyvalent anti-venom, all the four types of venom produced by snakes — proteolytic, hemotoxic, neurotoxic, cytotoxic — is injected into a horse.

Workers monitor the horses for around four months and then extract around 10 litres of their blood. The blood is passed onto special laboratories for various chemical processes to produce the anti-venom.

“The horses are raised on a diet of fresh crops and carrots, which cost around Rs15 million a year.”

He added that special, strong horses are kept separately to produce anti-venom for krait venom — which has the proteolytic venom — a neurotoxin which paralyses the respiratory centre — as that kind of snake is particularly fatal for humans.

According to Dr Ali, the NIH anti-venom department is also testing on camels and sheep as an alternative to horses for anti-venom production.

“Since horses have become much more expensive, we hope to use to sheep and camels as well, if they prove to be as resistant to venom as horses,” he explained.

Meanwhile, the NIH executive director complained that a lack of finance and resources is impeding the production of anti-venom at the institute. “Since it was set up 30 years ago, this department has received no additional budget and its infrastructure has not been upgraded either,” Brig Ikram said.

“Limited resources mean any task the department undertakes, takes months or sometimes up to a year to complete.”

“We would not only speed up production of anti-venom but also produce more quantities of it if the department was allocated a separate budget,” he said. “If staff were increased, then the department could complete tasks that take months in a few days.”

The NIH executive director added that a project to produce anti-venom in collaboration with China is set to begin this August. “We hope this project will meet Pakistan’s anti-venom needs. Our next step, if local demand is met, will be to export anti-venom,” he said.