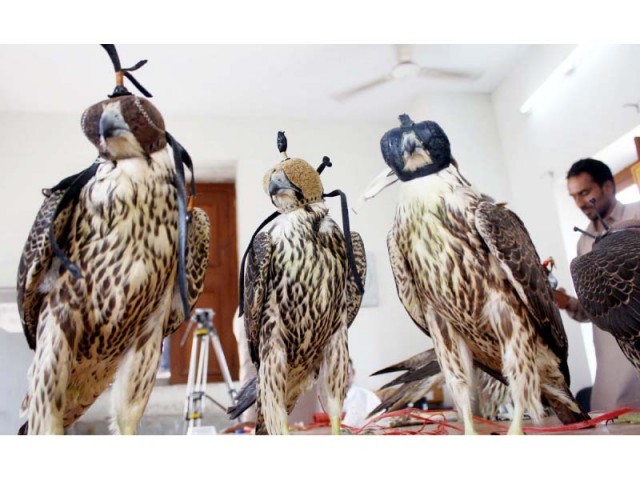 According to the wildlife department, 10 rare falcons were rescued from smugglers who were attempting to send them to the Gulf States.

The Sindh Wildlife Department officials set free seven of the 10 falcons, which were rescued as a smuggling bid was foiled earlier, in Kirthar National Park on Oct 26, 2019.

The birds were rescued in the presence of Houbara Foundation workers and custom officials.

According to sources in the Sindh Wildlife Department, 10 rare falcons were seized from the Jinnah Terminal during an attempt to smuggle them to the Gulf states. The falcons were initially kept in the custody of custom officials and were later handed over to the Sindh Wildlife Department, revealed the sources, adding that three of the 10 falcons have died.  The wildlife department sources said that one of the falcons died while it was in custom officials’ custody and remaining two died soon after the birds were handed over to the department.

Most wild animals fall sick when they are taken out of their natural habitats and kept in unfamiliar environments, and hence, recovered birds need to be set free in environments suitable for them, the sources explained, speculating that one of the falcons died in custom officials’ custody probably after it was exposed to suffocated environment or passed through scanners at the airport. The sources in the department claim that custom officials did not feed the birds during the period of four to five days when the falcons were in their custody, however declaring that the cause of the death could only be ascertained after post-mortem.