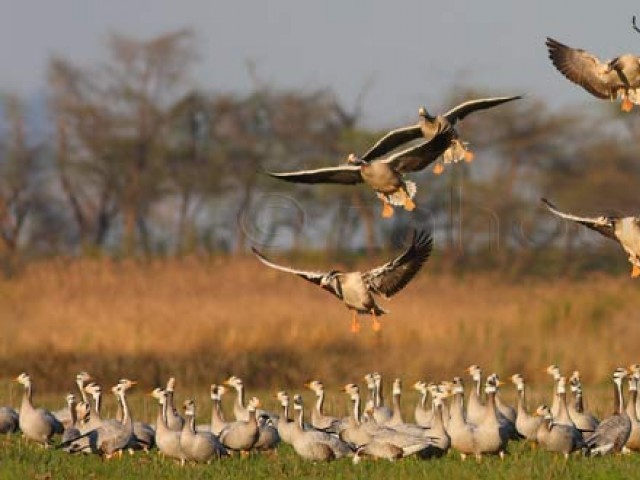 Every year, millions of ducks, storks and other fowl leave behind the harsh snows of Siberia and make Pakistan their temporary home. As harbingers of seasonal change, their yearly journeys are imbued with special cultural significance, both in Pakistan and elsewhere.

But a change in season is not all they signify – their yearly migration not only plays an important economic role in the lives of many Pakistanis, it is also crucial for the country’s delicate ecological balance.

Sadly, certain human actions have jeopardised the winter visitors’ survival, which in turn threatens to up-end this delicate balance, both in Pakistan and beyond.

This is especially true for Punjab, where migratory birds are staring down the barrel of extinction. The effects of climate change, the unprecedented increase in human population, rampant pollution and widespread use of pesticides in conjunction have disrupted the visiting birds’ dietary patterns and breeding habits, wreaking havoc on their numbers, World Wildlife Fund’s (WWF) Country Director Hammad Naqi said.

“In some cases, extinction may be a natural process, but human activities, particularly human-induced climate change, have aggravated the situation for migratory birds,” he said, underscoring the urgency of the matter.

According to Naqi, unexpected rainfall has prolonged migratory birds’ stay in Pakistan. “These birds usually arrive from parts of Russia in September and head back by the end of March. But they still have not returned this year as yet,” he said.

Wildlife experts now expect the birds to return in April instead of March, but worry that it will disturb their delicate seasonal clock which determines when they mate and raise healthy offspring. They believe being late to their breeding grounds can set in motion a domino effect that could threaten their survival.

Already, as many as 40 per cent of bird species have become extinct in Punjab, according to BirdLife International, an NGO that focuses on the conservation of birds and their habitats. The numbers of other migratory species have drastically fallen too over the last 30 years, its research suggests. A staggering 90 per cent of migrant birds are fighting for their existence due to inadequate or non-existent efforts to save them from hunting.

Pakistan is home to around 668 bird species, according to Professor Zulfiqar Ali of the Punjab University Zoology Department. More than half of these are migratory, he said, adding that the winter visitors include various species of ducks, herons, swans and other waterfowl along with partridges and eagles.

Talking to The Express Tribune, Punjab Wildlife Protection Department Director Muhammad Naeem Bhatti said that although no comprehensive report has ever been compiled on migratory birds, initial surveys still suggest that their numbers have shrunk.

“The wildlife department carried out a survey of some wild animals in the past and there are plans to conduct a survey on birds too so that their correct number could be gauged and endangered species can be saved from extinction,” he said.

Pointing out some successful conservation efforts, Bhatti said wildlife experts and Punjab authorities have been able to save White-Backed Vultures from near-extinction in the province through an artificial breeding programme. The programme, initiated by the Punjab Wildlife Department and WWF in 2005, involved the setting up artificial breeding centres in Changa Manga. The programme yielded success after 14 years with the hatching of six vulture chicks.

“We kept seven pairs of vultures in Changa Manga, but since female vultures lay only one egg per year, we encountered a lot of difficulty,” said programme director Hassan Ali Sukhera. “During the initial years, even if the female laid an egg, it failed to hatch… we were almost hopeless.”

“We finally achieved success in 2012, after some of the eggs hatched and resulted in healthy chicks. They are in good health and are being nourished,” he added.

With the vulture breeding season currently underway, Sukhera hoped for further success. “We hope more healthy chicks hatch this year. Once we have sufficient vultures, we will release them in specific areas so that they will be able to adapt to and grow in their natural environment.”

According to Sukhera, eight species of vulture are already extinct in Pakistan. “Sadly, no study on how they went extinct was carried out.”