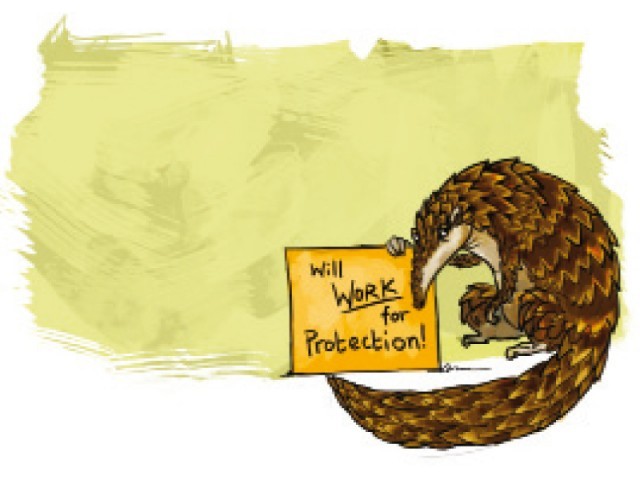 Pangolins — commonly known as scaly anteaters — which were once found in abundance in the fertile plains of Punjab, have now declared by the International Union for Conservation of Nature (IUCN) as one of the most critically endangered species around the globe. The small animal, which balls up to hide behind its thick, scaly hide upon any sign of danger, is one of the most trafficked mammals in the world. It’s illegal trafficking now poses a severe threat to the endangered species.

Pangolins are generally captured by local poachers and are then sold for as much as Rs 25,000 – Rs 30,000 to smugglers who then take these animals to neighbouring countries where these animals are scaled and used to produce medicines.

Environmental experts told APP that pangolins are the most poached species across the world and around 186 countries party to the Convention on International Trade in Endangered Species (CITES) voted for imposing a ban on the commercial trade of pangolins.

They said the illegally trafficked wildlife species of the country included freshwater turtles, tortoises, falcons used for falconry, poisonous snakes for pharmaceutical purpose, foxes, jackals and wolves for their fur, freshwater otters, sharks in the coastal area of Balochistan for its fins and scorpions for its venom.

He added that his organisation has conducted a detailed study about the species existing in the Potohar plateau and the Azad Jammu and Kashmir region including Attock, Jhelum, Chakwal, Rawalpindi, Mirpur, Kotli, Bhimber. The study revealed that pangolins were found in almost all areas focused on the research, however, at present the species merely exists on 32 per cent of the area, he added.

Waseem noted that numerous encounters of illegal wildlife trade and poaching of pangolins, mostly in Punjab, have faced a crackdown from the law enforcement agencies and the wildlife department. Consequently, illegal hunting incidents of the mammal have fallen across the country.

The WWF chief conservator added that around 65-70 per cent poaching and illegal trafficking of pangolins have been controlled.

Replying to a question, he said that the main reason behind wildlife trafficking and other environmental crimes in the country was weak legislation.

The smugglers are also active due to negligence of relevant authorities and quarters concerned, he added.

He said the WWF has sensitised the Airport Security Force and Customs officials about the smuggling of endangered species and means to control it. Waseem said that they have launched proper management plans for saving the pangolins of Pakistan and that every year, the World Pangolin Day was marked to create awareness amongst local communities about the importance of the animal and to protect against its smuggling.

Moreover, he said that Pangolin protection zones have been set up in Attock, Jhelum, Chakwal, Rawalpindi and AJK with guards deployed in collaboration with the local community.

Replying to a query, the chief conservator said they have also reached out to the academia and students to focus research on the indigenous pangolins.

The WWF team, he said, screens documentary in schools, colleges, universities and other institutions to create awareness and to sensitise students.