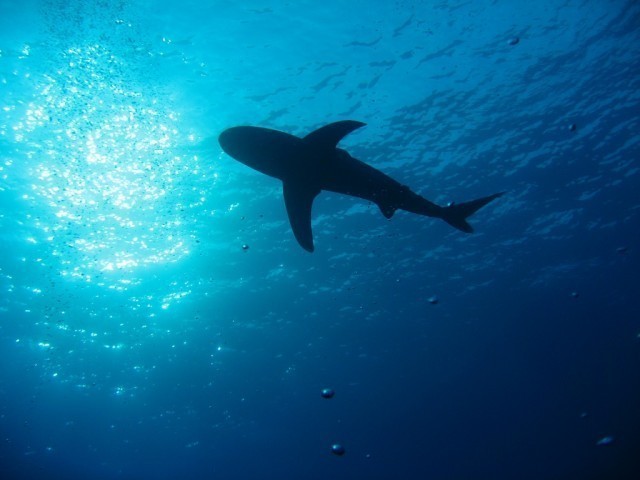 Enter any food street in Karachi and the aroma of fried fish emanating from different fish stalls is bound to make you salivate. Marinated in lots of spices and fried in a large wok right before the eyes of customers, fried finger fish has, over the years, become a popular delicacy in Karachi.

Although hundreds of people swarm Karachi’s various fish stalls every day to treat themselves to finger fish, little do they know that the delicious meat that they are consuming comes from sharks.
A recent investigation carried out by The Express Tribune has revealed that fish stalls across Karachi sell shark meat in the garb of “bara masala fish”, “finger fish”, and “fish katakat”.

The selling of shark meat has not only been confined to fish stalls but catering services also serve shark meat at weddings and other events in the form of finger fish or fish kebabs – without the knowledge of the consumers.

Even though it’s not religiously forbidden to consume shark meat, studies have shown that it is not the healthiest of options either.

According to a 2015 study published in Marine Pollution Bulletin, owing to their predatory nature and diet, sharks are susceptible to producing high levels of mercury. Regular and excessive consumption can have negative health implications for consumers.

Unprocessed shark meat can spoil very quickly and comes with a foul, ammonia-like odour because of the high content of urea in it. As a result, sellers add lots of different spices and chemicals in the meat to reduce the odour.

Since shark meat is not popular in Pakistan, people have reservations when it comes to its consumption. When questioned, many consumers who frequent finger-fish stalls told The Express Tribune that they would refrain from consuming shark meat.

Owing to its non-existent demand, shark meat is very cheap. Therefore, sellers do not reveal the identity of the fish to consumers and use local names like “mangra” to refer to it.

If sellers come across more curious customers, they even resort to lying and attribute false names to shark meat as a deceptive measure to continue to bolster their sales.

Shedding light on the matter, director of the fisherman cooperative society, Dr Muhammad Yousuf confirmed that it is, indeed, shark meat which is being sold all over the city in the garb of finger fish.

“People think that shark meat is forbidden, therefore, they do not want to consume it. As a result, sellers and catering companies lie to consumers and fish enthusiasts and tell them that they are being fed a ‘good breed’ of fish,” said Yousuf.

According to Sindh Fisheries Department director Dr Rukhsana Asghar Chaudhry, shark meat is extremely detrimental for those suffering from heart-related ailments or high blood pressure. “Sharks do not pass urine,” Dr Chaudhry explained to The Express Tribune. “This is why their meat has a bad odour and has very high ammonia content,” she added.

For Dr Chaudhry, it was unethical of fishermen and vendors to sell the shark meat to unknowing customers. “First, shark meat must be washed and treated properly,” she said. “Second, people must be told the truth about what they are eating and if they are okay with shark meat, then they can consume it by all means.”

Although sharks come in different sizes, they are typically 10 to 25-feet long and weigh from a few kilogrammes up to 500kg. When containers – loaded with shark meat – reach Karachi’s fisheries in wee hours of the day, they are firstly auctioned. Once bought, the real task begins: the removal of the sharks’ identity.

After the auction, all types of sharks are moved to a specific compound of the Karachi Fisheries where their bones and skins are separated from their flesh. Later, vendors, sellers and catering services buy the freshly-caught “boneless fish” for as low as Rs400 per kg – which is very cheap as compared to other fish.

“Every day, more than 10,000kg of shark meat or mangra is cut up to be supplied throughout the city,” said Yousuf. “Since the meat is boneless, it is readily purchased by vendors who then make finger fish, fish katakat and fish kebab out of the meat.”

The meat is marinated in spices for several hours to create a distinct taste and, once fried, finger fish is sold to fish lovers for up to Rs1,000 to Rs1,500 per kg without revealing the type of meat – which is a highly unethical practice.

A popular fish and chips restaurateur in Karachi said that owing to its taste and popularity, people don’t care what kind of fish they are eating.

“It is the taste that matters, which has been attracting hundreds of customers to our stalls every day,” he added with an air of confidence. “No one even bothers to ask about the type of fish we use,” he concluded.