A trip to the storied pyramids of Giza was supposed to be a highlight of Noémi Haszon’s Egyptian vacation. But minutes later, the Hungarian tourist had retreated into her tour bus, shaken and revolted by what she had witnessed.

Inside the pyramids complex, emaciated horses panted and strained as they pulled buggies loaded with tourists up a steep slope. Drivers whipped them to make them go faster.

Some horses slipped and stumbled on the smooth tarmac surface. Others had open wounds. Despite the summer heat, there was no water supply.

“I was shocked,” recalled Ms. Haszon. “Those poor horses. It was like another world.”

For years, the sense of wonderment experienced by visitors at Egypt’s great sites, like the pyramids of Giza or the Valley of the Kings in Luxor, has been spoiled by scenes of heart-rending cruelty toward the animals working there.

In outraged posts on Facebook or in emails to Egyptian animal rights groups, they have described collapsing horses, sickly camels and emaciated mules. A bustling camel market outside Cairo, where tourists are charged a fee to take photos, features beatings of camels and animals with bloodied faces.

Now the campaign group People for the Ethical Treatment of Animals, or PETA, is calling on tourists to boycott all working animals at Egypt’s major tourist sites. After appealing fruitlessly for help to Egypt’s tourism ministry, the group has released graphic footage of abused horses and camels to drum up international support for the campaign. 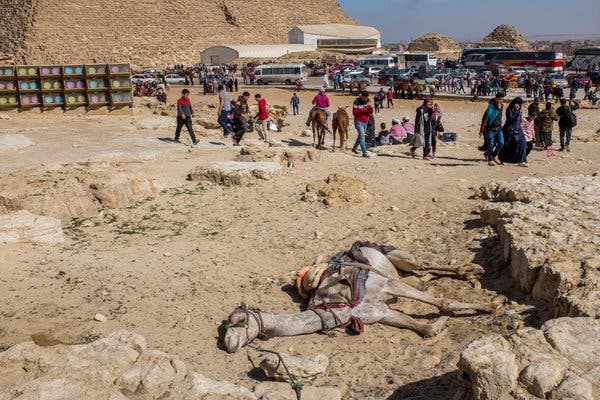 A collapsed camel at the pyramids on a recent Friday, the busiest day of the week for tourism. 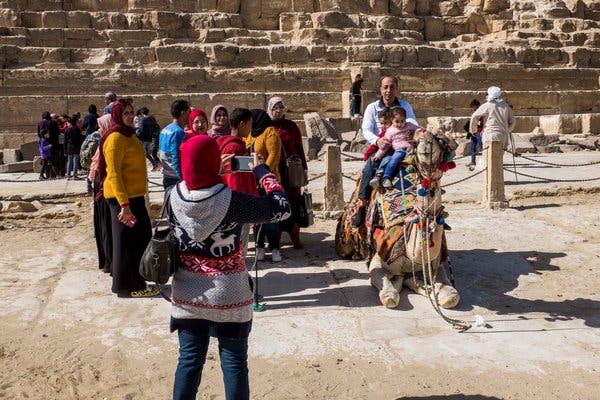 Riding a horse around the pyramids or having a photograph taken on a camel’s back is the quintessential Egyptian tourist experience. But scenes of animal abuse are common.

But what constitutes ethical tourism in an impoverished country like Egypt is a matter of debate, even among animal rights groups. Animal rides provide a livelihood for thousands of Egyptian families, and some groups argue it is better to reform their abusive ways rather than shun them entirely.

And many owners insist they treat their animals well — some kiss their camels on the lips to please tourists — and say they should not be penalized for the misdeeds of others.

Ahmed Kamel, a wiry young man who speaks several languages, offers buggy rides around the pyramids for about $9. On a bustling, recent Friday afternoon, he patted his horse fondly as Egyptian pop music known as electro shaabi blared from a speaker.

Certainly, he acknowledged, some owners were abusers: “They work in the morning, then go drinking in the afternoon. They don’t care for anything.” But, he added, “I have to take care of my family. If you push us out, what will we do?”

His horse, he said, was named after his daughter. “I love her,” he added, not specifying whether he was referring to the girl or to the animal.

At the Brooke Hospital for Animals in Cairo’s Syeda Zainab district, Dr. Mohammed Hammad swung back a stall door to reveal a skinny horse with protruding hips and a large wound on its rear.

The horse was wounded by an accident at the pyramids that led to an infection of its testicles, which was now being treated. “If you look into his eyes,” Dr. Hammad said, “you’ll see he’s not very happy.”

The hospital, where many of the worst cases end up, was established in Cairo in 1934 by Dorothy Brooke, an Englishwoman who had been distressed by the treatment of old war horses in Egypt. It now works across three continents, treating horses, donkeys and mules. 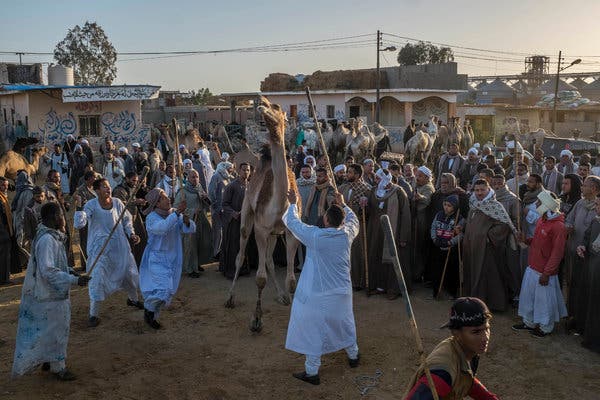 Vendors hitting a camel to make them sit down in front of potential buyers at Birqash, a camel market outside Cairo. 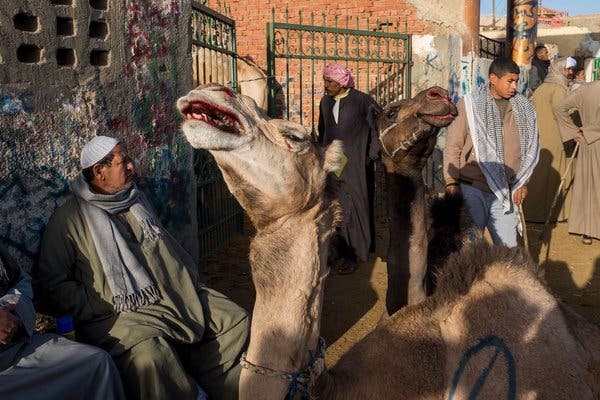 Camels with blood-speckled faces are a common sight at the Birqash market. 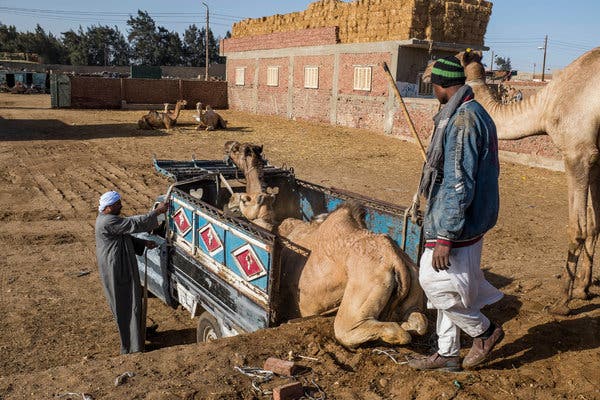 Buyers loading three camels into a small truck at the Birqash market.

When it comes to tourism, the Brooke organization encourages tourists to be vigilant of animal abuse instead of boycotting the rides entirely — urging visitors to watch out for signs of malnutrition and to refuse to ride with an owner who whips his animals.

Rather than shunning the owners, Brooke tries to cajole them into better behavior, often by appealing to their pockets.

Dr. Hammad pointed to another ailing horse. “I told the owner that if he heals rapidly, then he can work again,” he said. “And if we do nothing, he will die and be worth nothing.”

Animals were once revered in Egypt. The ancient Egyptians mummified animals such as cats, dogs, monkeys and birds as offerings to the gods or to help the animals reach the afterlife. In November, archaeologists found a collection of preserved cats and scarab beetles in a tomb outside Cairo. 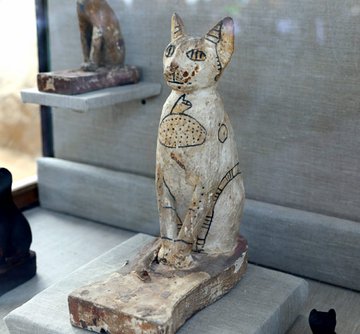 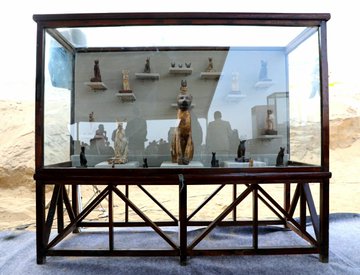 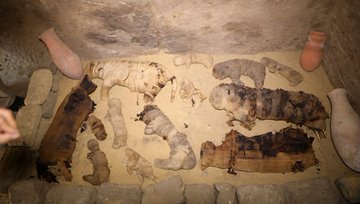 But these days, animal welfare is not a big issue in Egypt. The Giza Zoo is rundown and depressing. Wild dogs roam the streets at night. Islamic clerics have opposed euthanasia of stray dogs, saying it contravenes God’s will.

At the Birqash camel market, outside Cairo, cruelty is on open display.

Camels hobble around on three legs, with the fourth tied up to prevent them running away. Herders in flowing robes, wielding bamboo staves, thrash them to keep them in line. Camels with blood-speckled faces are a common sight.

Aiman Ramdan, a camel trader, fingered his prayer beads as he watched the scenes of abuse with quiet disdain.

Back home in Qena, about 300 miles to the south, people treated animals with respect, he said. “If a camel is injured, we heal it,” he said. “In winter, we set a fire to keep it warm.” 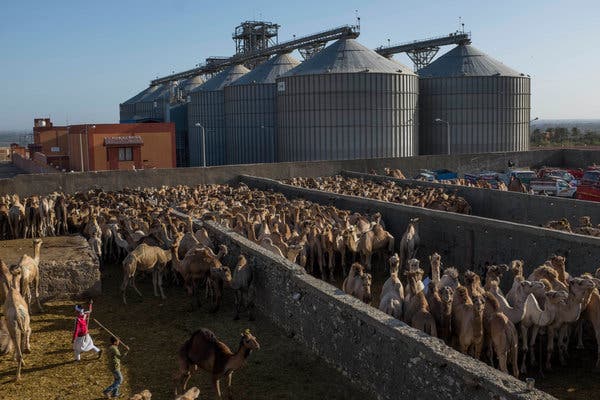 Camels at the market. In Cairo, with all the stresses of a crowded city, the treatment of working animals can be more frantic and abusive than outside the capital, one trader said. 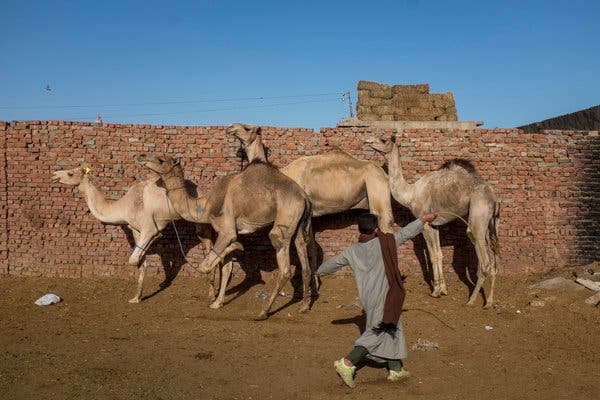 Camels at the market hobbling on three legs, with the fourth tied up to prevent them from running away. 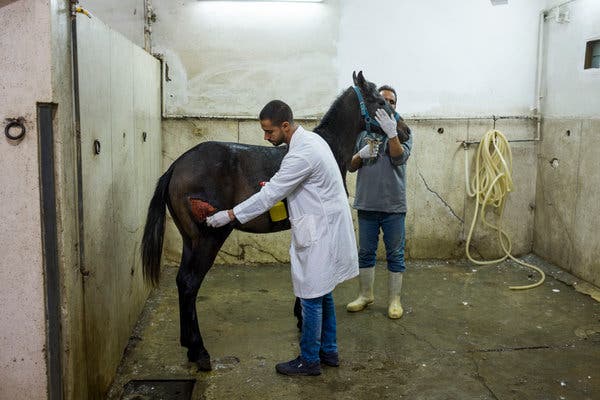 A veterinarian tending the wound of a horse at the Brooke Hospital for Animals in Egypt.

But in Cairo, a crowded megalopolis of noise and stress, people were more abusive. “It’s more extreme,” he said.

A spokeswoman for Egypt’s tourism minister, Rania al-Mashat, and several senior officials at her ministry, did not respond to questions about Egypt’s plans to combat animal cruelty.

PETA proposes that tourists move between the pyramids in different ways, perhaps following the example of attractions such as the Colosseum in Rome, where Segways can be hired, or the Angkor Wat temples in Cambodia, where electric bicycles are an alternative to elephant rides.

Some reforms are already underway. The government is currently building a new visitor center at the pyramids, scheduled to open this summer, that is said to include a separate area for horse and camel rides.

According to some local news reports, the area will include facilities to feed, water and give medical treatment to horses and camels.

Tourism in Egypt, which was devastated after the turmoil of the 2011 Arab Spring protests, has enjoyed a strong bounce in the past few years. But the resurgence is fragile. Militant violence is the biggest worry, but bad publicity from animal cruelty could dent the trade too.

Back home in Hungary after her trip to Egypt, Ms. Haszon started an online petition calling on Egypt’s government to prevent cruelty to working animals at tourist sites. As of Sunday, nearly 50,000 people had signed it.

“This area is ‘hell on earth’ for carriage horses and camels,” she wrote. “This horror must be stopped now.”

Amina Abaza, a local activist, said that she regularly received many similar reports from outraged tourists through the Facebook page of her nonprofit, the Society for the Protection of Animal Rights in Egypt. “I’m not highlighting the abuse to criticize my country,” she said. “But I want to make it better.”

A few years ago, one Swiss tourist was so appalled at the sight of a suffering donkey that she paid 800 euros, or about $900, to have the animal treated and transported to Switzerland. Ms. Abaza intervened, and persuaded the Swiss woman to leave the donkey at her sanctuary south of Cairo.

At first, the donkey, now called Seraphina, seemed angry and kicked anyone who got near, Ms. Abaza said. But now the animal lives peacefully alongside four donkeys, 23 dogs and an injured eagle. 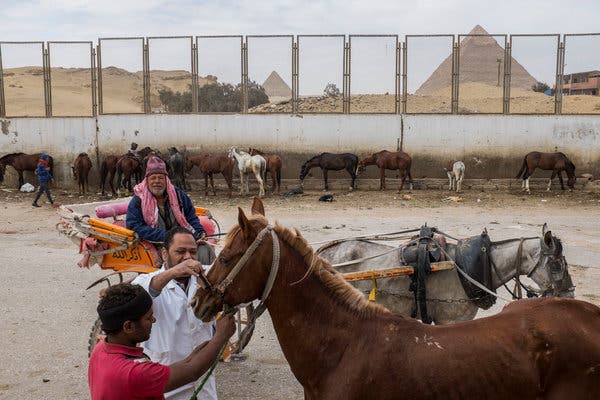 A veterinarian checking horses near the pyramid complex.