The two old friends hadn’t seen each other lately. Now one of them was on her deathbed, crippled with arthritis, refusing food and drink, dying of old age. Her friend had come to say goodbye. At first she didn’t seem to notice him. But when she realized he was there, her reaction was unmistakable: Her face broke into an ecstatic grin. She cried out in delight. She reached for her visitor’s head and stroked his hair. As he caressed her face, she draped her arm around his neck and pulled him closer.

The mutual emotion so evident in this deathbed reunion was especially moving and remarkable because the visitor, Dr. Jan Van Hooff, was a Dutch biologist, and his friend, Mama, was a chimpanzee. The event — recorded on a cellphone, shown on TV and widely shared on the internet — provides the opening story and title for the ethologist Frans de Waal’s game-changing new book, “Mama’s Last Hug: Animal Emotions and What They Tell Us About Ourselves.”

Other authors have explored animal emotion, including Jeffrey Moussaieff Masson and Susan McCarthy in “When Elephants Weep” (1995) and Marc Bekoff in “The Emotional Lives of Animals” (2007). Still others have concentrated on a specific emotion, such as Jonathan Balcombe in “Pleasurable Kingdom” (2006) and Barbara J. King in “How Animals Grieve” (2013).

“Mama’s Last Hug” takes these seminal works a step further, making this book even bolder and more important than its companion volume, “Are We Smart Enough to Know How Smart Animals Are?,” de Waal’s 2016 best seller.

For too long, emotion has been cognitive researchers’ third rail. In research on humans, emotions were deemed irrelevant, impossible to study or beneath scientific notice. Animal emotions were simply ignored. But nothing could be more essential to understanding how people and animals behave. By examining emotions in both, this book puts these most vivid of mental experiences in evolutionary context, revealing how their richness, power and utility stretch across species and back into deep time. 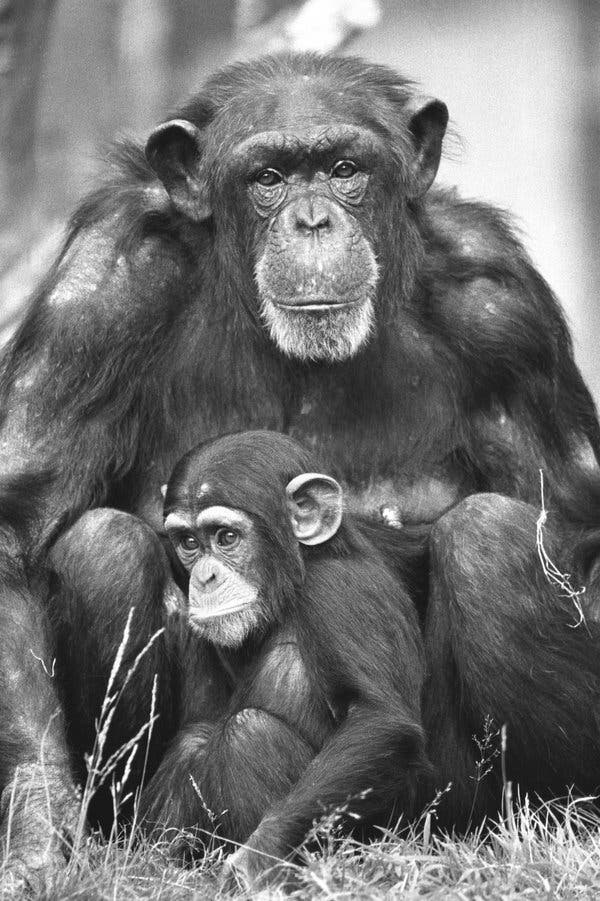 Emotions, de Waal writes, “are our body’s way of ensuring we do what is best for us.” Unlike instinct — which leads to preprogrammed, rigid responses — emotions “focus the mind and prepare the body while leaving room for experience and judgment.” Emotions “may be slippery,” he writes, “but they are also by far the most salient aspect of our lives. They give meaning to everything.”

In this book, de Waal sets the record straight. Emotions are neither invisible nor impossible to study; they can be measured. Levels of chemicals associated with emotional experiences, from the “cuddle hormone” oxytocin to the stress hormone cortisol, can easily be determined. The hormones are virtually identical across taxa, from humans to birds to invertebrates.

Emotions are not an affliction we must strive to keep in check. They are adaptive: Love, anger, joy, sorrow, fear all help us to find food and safety, protect our families, escape danger. Emotions enable us to survive.

So it’s no wonder that animals experience and exhibit an array of them. Zebrafish can get depressed — and respond to the same antidepressant drugs humans do. Crabs not only feel pain but remember it — and will carefully consider how much is worth enduring in exchange for a lair safe from predators. A dog who mistakenly bites his owner may be so upset over having broken this taboo that he suffers a nervous breakdown.

And like humans, animals can control their emotions when necessary. A frightened chimp will contort its face into an anxious “fear grin.” De Waal recalls watching fearful males abruptly turn away so rivals don’t see their expression. “I have also seen males hide their grin behind a hand, or even actively wipe it off their face,” he writes. “One male used his fingers to push his own lips back into place, over his teeth, before turning to confront his challenger.” Similarly, I’ve seen nervous speakers in greenrooms hold their faces in their hands and push their cheeks upward to sculpt a frown into a smile before taking the podium.

Though emotions are our constant, intimate companions, de Waal surprises us on almost every page. This book is full of the kind of facts you call up your best friend to share: Botoxed people have trouble making friends because their frozen faces make others feel rejected. Touch-sensitive plants like Venus flytraps stop moving when exposed to anesthesia drugs used in hospitals. Birds and cats can tell human males from females merely by observing their movements. 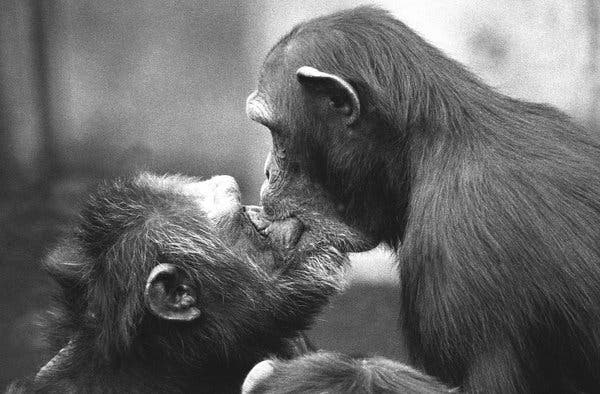 A female chimpanzee (right) kisses the alpha male on the mouth after a fight between them in which the male chased her. As in humans, kissing is typical of both reconciliations and greetings after separation.

But the book succeeds most brilliantly in the stories de Waal relates. Some are brutal, like the premeditated murder of Luit, a would-be alpha male at the chimp colony at Burgers Zoo, in the Netherlands. Luit had recently usurped power from two other high-ranking males, and, unwisely, had failed to re-establish good relations with his rivals. Overnight, the two chimps ganged up to punish him, biting off fingers and toes, and creating wounds in his scrotum through which they squeezed out his testes. This chilling incident was not, de Waal tells us, an artifact of captivity: Studies of wild chimps also show that the reigns of alphas who bully and cheat are often short and may end badly. (Washington, take note.)

Like us, our fellow primates value justice and fairness. De Waal recounts what happened during experiments with capuchin monkeys at the Yerkes National Primate Research Center, near Atlanta. Two monkeys worked side by side in a test chamber with mesh between them. For successfully completing a task, they were rewarded with cucumbers or, even better, grapes. If both monkeys got the same reward for the same task, everything was fine. But if one monkey received grapes while the other was rewarded with a mere cuke, conflict arose: “Monkeys who’d been perfectly happy to work for cucumber all of a sudden went on strike.” Sometimes one would hurl the vegetable back at the researcher in disgust.

Of course, we recognize ourselves in such stories. This is why they are powerful: They evoke our empathy, perhaps our most cherished emotional ability (one that we share with animals, as anyone who has lived with a dog well knows). But, to our detriment, researchers who study animal behavior have been methodically warned against exploring empathy as a means of understanding. Too many illuminating observations have gone unpublished because suggesting that humans share traits with other animals invites accusations of anthropomorphism.

To avoid such charges, researchers have invented a glossary of contorted terms: Animals don’t have friends but “favorite affiliation partners”; chimps don’t laugh when tickled, but make “vocalized panting” sounds.

This isn’t just silly; it’s dangerous. Instead of worrying about anthropomorphizing animals, we should fear making a far worse mistake, what de Waal calls “anthropodenial.” When we deny the facts of evolution, when we pretend that only humans think, feel and know, “it stands in the way of a frank assessment of who we are as a species,” he writes. An understanding of evolution demands that we recognize continuity across life-forms. And even more important, achieving realistic and compassionate relationships with the rest of the animate world requires that we honor these connections, which extend far and deep.

A few years ago, I found myself in a situation almost identical to the one de Waal describes at the start of his book. My friend Octavia was old, sick and dying. We hadn’t looked into each other’s eyes for a long while — nearly a fifth of her life span. I came to say goodbye. When she caught sight of me, Octavia, with great effort, using some of the last of her limited strength, rose to greet me and enveloped me in her arms.

There were a few differences between the opening scene of “Mama’s Last Hug” and the one between Octavia and me. Mama and Van Hooff shared an ancestor perhaps five million years ago; my friend and I had last shared an ancestor in the Precambrian Era — before limbs or eyes had evolved, back when practically everyone was a tube. Van Hooff and Mama had almost identical facial muscles and skeletal structure; Octavia’s mouth was in her armpits, she had no skeleton at all and her arms were equipped with 1,600 suckers. Octavia was a giant Pacific octopus. Yet she and I cared for each other — enough for both of us to delight in one last, tender, emotional embrace.