A Tiger Without Enemies

Bengal’s fishing cat and its habitat in the wetlands are endangered. Activists sing of their symbiotic beauty. 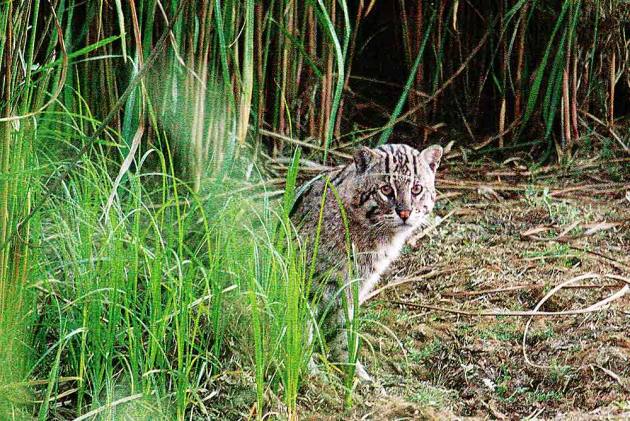 Hooghly district, West Bengal. Eve­n­ing is descending over a large marshy lake that stretches from the edge of a cluster of villages for a few square kilometres to the opposite bank, overgrown in this rainy season with a coarse grass called hogla. This indigenous plant once cove­red the district, giving it its name. And the thi­ckets it formed was the natural habitat of a wild feline, the ‘fishing cat’, now on the verge of extinction.

Though not known to attack humans, this less celebrated cousin of the redoubtable Royal Bengal Tiger clearly inspired enough awe for locals to refer to it as a ‘tiger’—from the commonest maach baagha (literally, ‘fishing tiger’) to the rarer baaghrol. Yet, over generations, it lost ground—poached, hacked to death, chased out, their habitats encr­oached upon and destroyed through unchecked, aggressive industrialisation. Since the past decade, this species, of the Prionailurus viverrinus genus, which does not have any predatory enemies in nat­­ure, has been designated ‘vulnerable’ by international wildlife conservationists IUCN (Inter­na­tional Union for Conservation of Nature).

The locals, however, are sworn enemies. “I have enc­ountered many, as most villagers from these parts do,” a fisherman declares. “I try to kill them. I have stabbed one to death using the sharp end of my fishing hook.” Another villager speaks of its ‘evi­lness’. He says, “They roam the earth in the dead of night.” Villagers claim that they have to stay awake to keep vigil against the night prowler.

This dread of the “intruder” has a basis. Fishing cat, which lives on fish—diving into ponds and lakes for a meal—is a menace for fish farmers. “We invest lakhs of rupees in our businesses,” explains a villager. “But they eat up the produce and we incur losses.” One villager who has observed a fishing cat in action explains its modus operandi: “It waits patiently, focused on the hunt and pounces when it is sure.” Their activity escalates during summer, when water levels are shallow and fish surface. In leaner seasons, fishing cats attack villagers’ livestock. “Everything, from ducks to chickens, is dragged away,” cribs a homemaker.

IUCN’s tagging of the fishing cat “vulnerable” in 2008 prompted a group of Calcutta-based conservationists to take up the cause of protecting the species. They included environmental activist Bonani Kakkar, ecologists and lawyers from pioneering groups like H.E.A.L (Human & Envi­ron­ment Alliance League) as well as biologists and zoologists. Conservationist Tiasa Adhya’s The Fishing Cat Project, for instance, was one of the first to try to track the existing population by scouring the ground for pug marks, scraping up and scrutinising scats and installing camera traps.

After being declared the ‘state animal’ of Bengal, fishing cats will be used for tourism. The tag gives protective cover too.
Adhya says, “Our state had some of the highest concentrations of the fishing cat’s natural habitats.” These included the lower Gangetic wetlands of Hooghly and Howrah, as well as those of the Terai region in the north and the mangroves of the Sunderbans in the south. But the damage to the cat population was imm­ense. Swa­thes of wetlands had been claimed by agr­­iculture, industry and real estate. Adhya says that farming—agricultural and aquacultural—poses a serious threat to wetlands. In Howrah and Hooghly, wetlands have shrunk by over 40 percent. 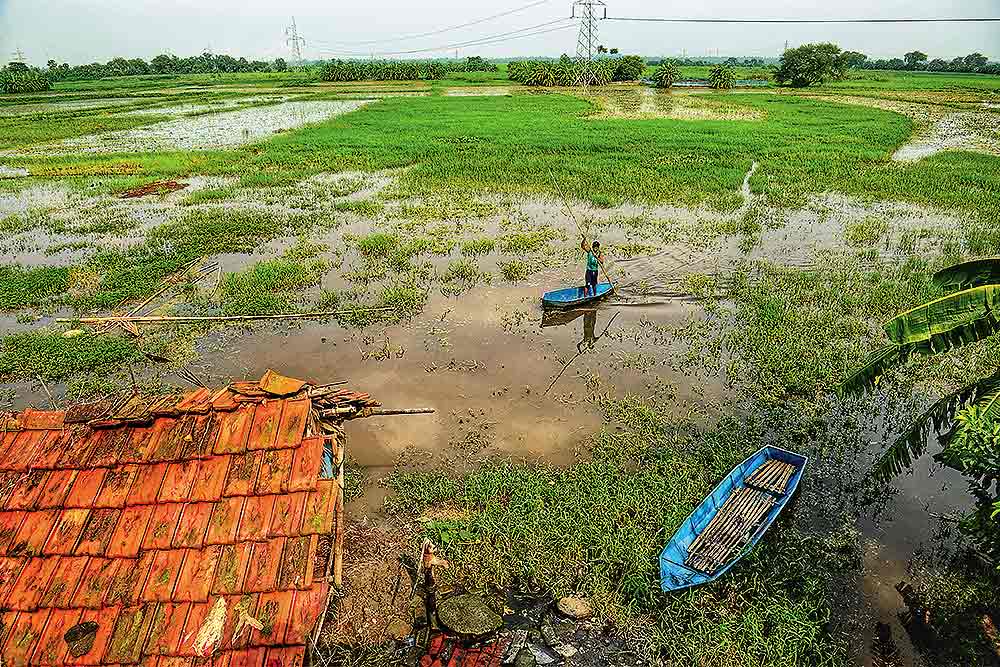 Marshland like this used to cover much of Hooghly district

In spite of such relentless man-made depredations, fishing cats are resilent enough to survive, though they are less associated with sig­h­tings than with chance discoveries of their killings. According to Adhya, between 2010 and 2011, 27 fishing cats were found dead, supposedly killed by villagers trying to protect livestock. A survey betw­een August 2016 and the present reveals that only seven cats had died over the past two years, though it is difficult to establish if this reflects villagers’ forbearance towards the vulnerable species or is a reflection of a fall in their numbers. “No reliable survey has been conducted to count the number of fishing cats in Bengal,” Adhya points out.

By 2012, within two years of conservationists taking up its cause, the fishing cat was decla­red, to wide acclaim, ‘the state animal’ of West Bengal. It meant that over and above its ‘protected’ designation, it would henceforth be used for pro­moting tourism, besides being Ben­gal’s claim to ownership of a protected species.

“Anything that works in favour of the protection of the fishing cat is a step in the right direction,” points out Suvrajyoti Chatterjee, an environmental activist with H.E.A.L. and The Fishing Cat Project.

Yet, in spite of the steps taken for protecting the fishing cat, there remains glaring loopholes which vested interests can and have been manipulating. “Indian law prohibits encroachment on and filling up of marshlands as these play a significant role in maintaining ecological balance,” says Meghna Bane­r­jee, a lawyer associated with H.E.A.L. But developers, backed by corporate, bribe civic off­icers into tampering with land records, so that wetlands are recharacterised as ‘wastelands’. This makes it possible for the land to be parcelled into plots and sold away. “We are involved in court battles for protecting threatened wetlands and marshlands from such illegal encroachments,” Meghna explains. She points out that even the government, in its policy document, Draft West Bengal Wetlands acknowledged the instances of such manipulation of land records.

Not surprisingly, wetland activists face threats, including from political parties, dons and corporations. Adhya points out that in 2012, environmentalist Tapan Dutta, with whom she and her team had worked closely, was murdered. “His killers are still to be arrested,” she rues.

Villagers are more cooperative than land sharks. They are being told that fishing cats are the victims, not intruders.
Ironically, local villagers, the fishing cat’s imp­lacable foes, prove to be more coo­­perative. “They need to be sensitised to the fact that fishing cats are not intruders but victims,” Adhya says. The group has been holding meetings in the villages around the marshlands. The focus is to inform locals that the fishing cat is now a protected animal and killing it can incur fines and prison sentences. “However, we do recognise the difficulty faced by villagers,” Adhya says.

Conservation scientists explain that protecting wetlands is more significant than just preventing the extinction of a species. “Wetlands act as nature’s sponges, absorbing toxins and purifying water before pumping it back out into the environment,” points out Partha Dey,

co-fo­u­­nder of The Fishing Cat Project. “They also retain nutrients in the ground during floods, which later is showered back as rain.” Wetlands also help land retain its fertility.

Hooghly district. Night has fallen. If the flashing eyes of a fishing cat can be spotted in the darkness, it means good news for the environment.