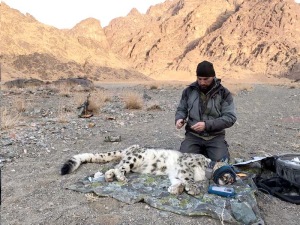 There are perhaps only a handful of animal species that are as elusive as the enigmatic snow leopard. Their majestic appearance and their ability to hunt their prey on the steepest of cliffs without as much as a sound have imbued them with a special mystique in popular imagination.

But there is another more sinister reason why the ‘grey ghost of the mountain’ remains as elusive as ever.

With an ever declining population of less than 4,000 in the wild and perhaps just 2,500 breeding adults, snow leopards are in crisis. And while the species is on priority for conservation efforts by several wildlife organisations, the risk persists that the grey ghost may become just that – a phantom from another time that will only haunt our memories.

This is especially true for Pakistan, where the snow leopard population has dwindled down to a startling 200 to 400 cats only. Although ongoing conservation efforts have managed to curb the hunting of snow leopards, the species faces an even greater threat in the form of climate change.

In Pakistan, the species is spread across its three mountain ranges – the Karakorum, the Hindu Kush and the Himalayas.

Once of these fragmented populations inhabit the mountains of Chitral. A survey carried out in 2007 noted that only 36 snow leopards remained in that region at that time. Since then however, no further surveys have been conducted to ascertain where their numbers stand.

While the government appears disinterested in snow leopard conservation, the United Nations Development Programme (UNDP) has been sponsoring a five-year project to ascertain snow leopard numbers in Chitral, Gilgit-Baltistan and Azad Jammu and Kashmir and raise awareness about the need to protect the species.

“Efforts to raise awareness among locals and other conservation activities are underway in 15 to 20 villages,” said Jafaruddin, the Chitral deputy director for the Snow Leopard Foundation, one of the organisations part of the UNDP-funded project. According to him, efforts to raise awareness appear to have borne fruit as hunting of the species has declined and their numbers appear to have improved.

“We have convinced 108 women in the Kogzai, Kojo and Golean areas of Chitral to weave traditional handkerchiefs for a monthly wage to support their families,” she said. “In return, the women and other members of their community have agreed not to hunt snow leopards, even if they attack their livestock.” In case someone’s livestock is attacked by a snow leopard, they are offered compensation instead, Yasmin added.

“No one has hunted snow leopards in Khyber-Pakhtunkhwa in the last 10 years,” said K-P Chief Wildlife Conservationist Safdar Khan. “There are strict laws in place and constant awareness drives are being held. Locals are also provided employment through different programmes, incentivising them to not harm the species,” he added.

But while conservationists may have helped bring down the number of snow leopards being hunted, another greater threat to the species looms on the horizon.

“Year after year, the impact of climate change is increasing,” warned Peshawar Engineering University Assistant Professor Dr Asif, who holds a PhD on water and climate change from Cambridge University.

“Snow in the glaciers of Karakorum, Himalayas and Hindu Kush is fast melting. Glaciers have already melted by three to five metres in the Himalayas and by one to three metres in the Hindu Kush. Among other things, this is having a profound impact on snow leopards by forcing them to move to areas where they face a shortage of prey and other necessities,” he said.