Around 12.20 pm on Feb 13, 2019, I heard a gunshot followed by the sound of a dog whimpering from the direction of Bukhari Commercial in Phase 6, DHA. About 30 seconds later, there was another gunshot, followed by silence. Out of my window, I saw a man in a black uniform, with the words “CBC” (Cantonment Board Clifton) in white letters over his back, standing holding a gun over the body of a dog. I rushed out and was with the crowd at the scene two minutes later, but by then the two CBC workers had already departed.

They had shot two dogs, according to the crowd, despite people’s protests. They had left one of the bodies behind.

We could not find them anywhere so we waited by the dog’s body, hoping the CBC personnel would return so that they could be confronted. The crowd spoke of one worker brandishing his gun, making a deliberate spectacle of the act, and then shooting the dog as it attempted to run away. The men who gathered were visibly upset.

They said the dog was friendly, harmless and never bothered anyone in the area. They said the CBC worker had shot the dog with open relish, but had not anticipated the extent of the crowd’s disapproval and therefore hurried away. A group of us waited for an hour, but the CBC workers did not come back. An hour later, I spoke with some other CBC men who had come to collect the body.

They told me that the CBC worker responsible had narrowly missed a fruit-seller while shooting at a dog in the area earlier.

I know that a child who lives nearby raised many of the area’s “stray” dogs, feeding them and playing with them regularly. So they are not really stray.

The following day, we were able to meet with the CBC CEO to discuss the matter. The CEO committed to halting all culling in the areas under his purview, effective immediately, but demanded that animal rights organisations, NGOs, and concerned citizens suggest alternative solutions within two weeks to handle stray dogs. This is an undoubtedly positive move, but incomplete without a proper investigation into the specific CBC worker’s conduct. 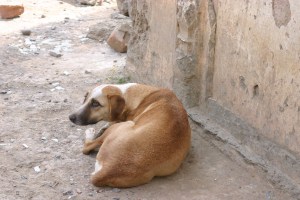 Mercifully, fishermen are taking their boats out to Karachi’s ‘dog islands’ to feed the teeming islanders unlike the assholes killing them in the rest of Karachi.

Dogs inhabit dozens of such islands that lie offshore in the Arabian Sea just south of the port city. They are entirely dependent on the goodwill of the fishermen who bring them food and fresh water—but the only alternative may be death.

The city’s feral canine population, which conservative estimates peg at about 35,000, faces a massive culling each year in a country where animal rights are at a low and religious doctrine engenders revulsion toward dogs.  The islands serve as a refuge where hundreds avoid the slaughter.