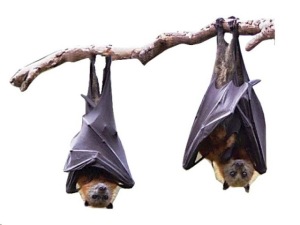 Many think of bats as spooky, bloodsucking beings which only exist to harm and scare humans. In reality, however, they are fascinating nocturnal creatures that are relatively environmentally-friendly and have, quite literally, been hanging around alongside man for many years.

Like various other cities of the world, Lahore used to be home to thousands of bats who dwelled in the thick trees spread across the provincial capital, particularly those at the Governor House and Baghe Jinnah. Recently, however, unnatural light, traffic noise and the decline in fruit-bearing trees in urban areas of Lahore have been taking their toll on the number of bats – the only flying mammal known to man.

Environmental experts have warned that the fall in the number of bats is affecting the ecosystem of cities.

There are around 1,300 species of bats throughout the world, most of which fed on insects and fresh fruits. By actively devouring parasites and insects infesting crops, these animals present themselves as friends of farmers. In addition, they also play an effective role by supporting the pollination process in plants as a mark of their friendship with the environment. Bats are also critical in maintaining the food chain in the ecosystem.

According to Dr Arshad Javed, assistant professor at University of Veterinary and Animal Sciences Lahore, the number of bats is on a decline in urban areas due to deforestation, construction of skyscraper buildings for which trees are cut down, irritatingly-sparkling lights throughout the night, use of pesticides in crops, and falling number of fruit-bearing trees. The bats are now migrating from big cities of Pakistan to smaller places in search of peaceful habitats.

“In addition to bats, several species of birds are also declining in Lahore,” Dr Javed said. “The natural ecosystem will lose its strength due to a decrease in the number of bats. Consequently, the number of mosquitoes, flies and other insects would increase because of which humans will face an increase in diseases. Increase in parasites may also lead to damaged crops and famine,” he explained.

Research shows that bats are more active than birds when it comes to the pollination of plants. Therefore, a decrease in the number of bats can also affect the growth of plants, flowers and fruits. Bats help in the pollination of over 700 species of plants, including banana, mango, apricot and fig trees. Bats that rely on fruits also swallow the seeds to later defecate them elsewhere – a process which helps in plant growth.

The administration of Baghe Jinnah Lahore also admitted that the number of bats is gradually declining while their death rate has increased. “We find two to three dead bats lying under the trees every week,” an official said. “Bats live in extended families, and each family comprises hundreds and even thousands of members. Due to a sharp decline in their numbers, they can now only be seen around a few dense trees of Baghe Jinnah and the governor house.”