The hunting season for Ibex concluded on the last day of Dec 2018 with a Pakistani hunter bagging a prized trophy of 45 inch horns.

The winter was at its peak, when Maqsood Ali from Swabi climbed up the slopes of Golen Community Game Reserve of Chitral challenging snow and below freezing temperatures.

Maqsood along with other hunters were looking for the elusive Himalayan Ibex known for its agility and speed on the treacherous mountainous slopes.

However, only Maqsood, after a gruelling 14 days of tracking and stalking in snow, managed to gun down the huge male Ibex having horns measuring 45 inches. Sadly, he was assisted by Chitral Wildlife Block Officer Javed Ahmed who had assigned a game watcher to help Maqsood stalk the prey.

Under licenced trophy-hunting scheme, hunters pay a fee to the KP provincial government and are allowed to hunt males. Young virile males and females are prohibited for the sake of continuity of the species. The proceeds from hunting fee go 80% to the development of community living around the game reserve and guarding the wildlife and 20% goes to the provincial exchequer.

The fee for shooting a Himalayan Ibex is nearly Rs 500,000. One only wishes if Maqsood had so much money that he could spend it directly for welfare of Ibex instead of killing them.

However, Maqsood said that after paying such huge amount of fee, the hunters expect a decent night shelter. “Outdoor life is part of hunting, but people paying almost half-a-million rupees deserve some shelter in freezing cold,” he said after spending 14 nights in a goat-shed with game watcher.

“When I was leaving for the hunting grounds, I was assuming that having paid such heavy fee at least they would provide us night shelter after all day walk in the snow, but I was wrong. I slept in a goat-shed that the game watcher had arranged for me, otherwise I would have frozen in the cold,” Maqsood said.

He survived but the Ibex could not. 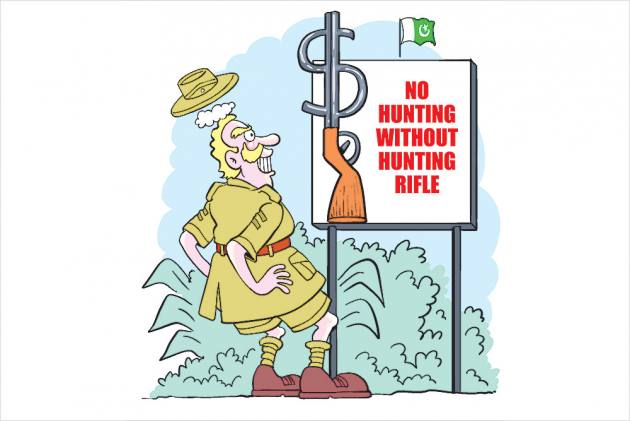 They Beg Hunting Dollars, Too

Pakistan’s wildlife conser­vation policy is as much a donkey-brainer as the country itself. It has made it illegal for locals to hunt wildlife, but foreign trophy hunters can pay thousands of dollars to kill 12 a year.

The money is apparently used to bankroll conservation efforts. Besides, the hunting prevents overpopulation and gives the lawless country an image makeover (the trigger-happy millionaire foreigners tell the world that Pakistan is safe).

But the world went tchk tchk tchk when a fat-cat American banker paid $100,000 to slaughter a rare Himalayan mountain goat, the screw-horned Astore Markhor, and boasted of his “easy and close shot” with a high-powered rifle. “I have hunted almost all animals here. I saved the markhors for the last,” bragged Bryan Kinsel Harlan after the hunt this February. He has gone into hiding since.