But increasingly, the desire to save the turtle is winning out, especially among younger Balinese.

By day, Legian Beach is crowded with tourists from around the world who come for the sand and surf. By night, when the beach is dark and nearly deserted, it becomes a critical habitat for turtles.

Alex Unwakoly, a volunteer from the Bali Sea Turtle Society, was patrolling a stretch of beach across from a five-star hotel one recent night when he spotted an olive ridley turtle that had crawled up on the sand to lay its eggs.

So began a rapid operation to save the turtle’s offspring.

He and a colleague kept a handful of tourists at a discreet distance while the turtle — classified as a member of a vulnerable species — laid its eggs. Other rescuers arrived. And as the turtle crawled back to the Indian Ocean, they dug up the 136 eggs, each about the size of a Ping-Pong ball, then put them in a bucket and took them away to hatch in a safer spot.

“Every time she lays eggs, she will come back to this place, the place she was born,” Mr. Unwakoly said. That can be several times a year.

The largely volunteer campaign to save Bali’s sea turtles is a rare success story on this popular tourist island, which struggles with environmental challenges, including shoreline trash, eroding beaches and soul-sapping traffic jams.

Turtle eggs left to hatch on their own, as nature intended, face many threats. They can be crushed by beachgoers, swept away at high tide, dug up by wild dogs or stolen by poachers. Turtles laying their eggs on the beach face the risk of being carried off and becoming dinner.

“The most important thing about conservation is how to educate the humans,” said I Wayan Wiradnyana, the founder of the Bali Sea Turtle Society. “The sea turtle belongs to everyone, so everyone should take responsibility.”

Six of the world’s seven species of sea turtle inhabit Indonesia’s waters, and all of them are classified as vulnerable, endangered or critically endangered.

The group’s primary success has been with the olive ridley, which appears to be less affected by the trash, noise and bright lights of modern Bali.

It also is said to have a fishy taste, unlike the green sea turtle that Balinese consider the most delicious.

The plight of sea turtles has improved considerably since 2001, when I came here to investigate the turtle trade. Catching, possessing or eating the animals was banned in 1999, but even so, tens of thousands of turtles were being killed.

Turtles awaiting slaughter were kept in plain sight in bamboo pens on the beach. Turtle meat was served openly at small restaurants and at Hindu ceremonies. Turtle smugglers operated with impunity, at one point burning down a police post in protest of the ban.

The turtles were butchered alive to keep the meat from sticking to the shell. One butcher described the gruesome, 10-minute process for me: He first cut off the flippers, then separated the meat from the shell and at the end removed the heart, still beating.

The authorities on the predominantly Hindu island began to crack down rather than risk a backlash from foreign tourists.

Baby olive ridleys at the Bali Sea Turtle Society’s conservation center. The largely volunteer campaign to save sea turtles is a rare success story on the environmentally challenged tourist island. 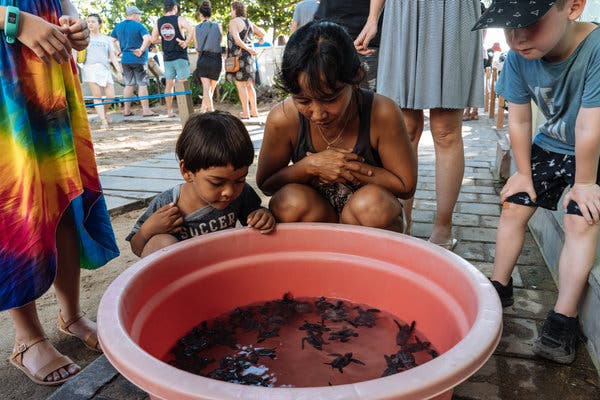 Today, the turtle trade has been driven underground. Some smugglers and vendors remain in business, though, and last year Indonesia’s marine police in Bali seized more than 1,540 pounds of turtle meat, including more than 400 pounds packed in ice and sent by bus from the nearby island of Lombok.During the two years before that, the police arrested three smugglers and seized more than 120 live turtles, records show.In a pre-dawn raid in March on a restaurant in Jimbaran, a popular tourist area, the police arrested a cook in the act of cutting turtle meat. If they had arrived much later, it would have been chopped so finely it would have been indistinguishable from other meat.“When we got there, the flippers were already chopped up,” said Budi Prasetyo, a marine police officer. “We had to put the puzzle back together.”

In April, the local police arrested a man near Kuta Beach suspected of stealing a woman’s purse. They searched his motorbike and found 97 newly dug-up turtle eggs, Mr. Wiradnyana said. The police handed them over to the hatchery. Two were broken.Mr. Wiradnyana and I Gusti Ngurah Tresna, known as Agung, began trying to save sea turtles in 2001. They recovered the eggs from a single nest, hatched them and released the babies.

The following year, they recovered eggs from two nests.

Gradually, they raised awareness in the community, attracted volunteers and built a network of lookouts, like taxi drivers and hotel security guards, who report sightings of turtles on the beach.

In 2017, the society retrieved eggs from a record 761 nests and released some 70,000 hatchlings. This year, they are on track to rescue and release even more.

But nearly all of them are olive ridleys. Mr. Wiradnyana pointed out that the five other species known to inhabit Balinese waters are not making a similar recovery.

And he worries about many long-term threats: Hotel development, beach erosion and rising sea levels due to climate change all reduce the turtles’ nesting area. Illegal hunting and floating plastic garbage can kill them at sea.

When rescuers recover eggs, they take them to the society’s hatchery at Kuta, one of Bali’s most crowded beaches.

The hatchery, 30 feet long, is built in the shape of a giant green sea turtle. The rescuers bury the eggs in sand and wait. The eggs hatch 45 to 60 days later.

Most of the hatchlings are released within 24 hours in an uplifting, circus-style event that draws hundreds of tourists.

On one recent afternoon, the hatchery prepared to release more than 400 hatchlings. There was little advance notice, but word spread down the beach. By 4 p.m., hundreds of people had assembled.

Mr. Agung grabbed a megaphone and climbed up on a small platform.

“It’s time for action for the baby turtle now,” he announced. 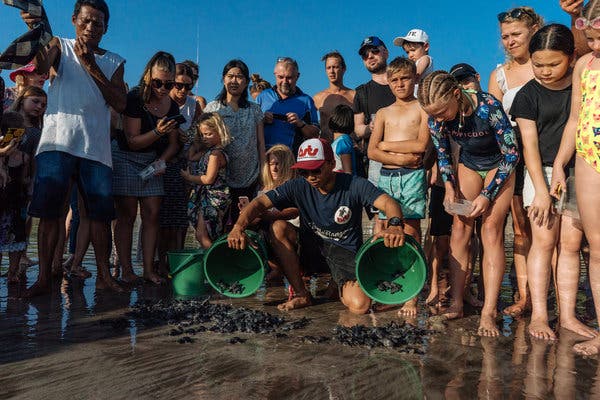 He spoke briefly about the challenges the hatchlings would face to reach adulthood in the open ocean.

“For every 1,000 turtles we release on the beach, how many will survive?” he asked.

“One!” called out several people who had done their homework.

As an afterthought, he mentioned that the society accepts donations. But there was no hard sell. Participation is free.

About 200 people, almost all foreign tourists, lined up, received a baby turtle in a plastic dish and headed down to the beach.

As directed, they stood behind a line in the sand facing the ocean. Mr. Agung stood near the waterline and issued instructions through his bullhorn.

“Are you ready?” he called out. “Everybody squat down! One, two, three, release your turtles!”

The race was on.

The turtles scrambled toward the water but stopped short. The tide was out and the distance considerable.

After the hatchlings got the feel of sand under their flippers, Mr. Agung directed the crowd to walk forward, pick up a turtle and carry it to the surf. Standing knee-deep in the water, they let them go a second time.

Afterward, the participants were enthusiastic about helping to save a threatened species.

“It’s amazing,” said Teagan Hercus, 18, a university student from Australia. “It’s the best thing we have done in Bali.”

Regina Greilich, 26, a teacher from Germany, praised the turtle rescuers and their enthusiasm.

“I really like the fact that they care so much about the environment,” she said. “They do it with so much passion.”