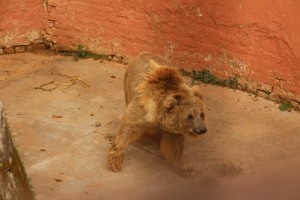 In July 2018, a bear at Marghazar Zoo has also died, adding to the increasing number of animals dying in the Islamabad and other zoos of Pakistan. The bear was being kept alone and in a small enclosure, with zoo officials saying he may have died due to neglect and living in a confined space.

During the last few years, 15 animals and birds have died in the zoo but the authorities have yet to improve the facility. These include nilgais, zebras, ostrich and lion cubs.

The zoo management claims these were all natural deaths.

Chief Metropolitan Officer (CMO) Syed Najaf Iqbal said that a post-mortem report says the bear died due to a tumour in its intestines.

“As far as the upgrading of the zoo is concerned, I do agree that there is need for improvement for which we have a complete plan,” he said.

The CMO added that the federal government has earmarked Rs 100 million in the fiscal year 2018-19 for upgrading the zoo.

The MCI will be given a total of Rs 200 million over two years for the project.

“We have forwarded the PC-1 to the concerned ministry for approval and we are hoping to receive the funds in September,” he said.

The MCI does not have any funds yet and is waiting for the release of the budget from the federal government in August-September, he said.

A zoo official said that according to the PC-1, existing facilities will be upgraded and new enclosures will be made as well as walkways and an animal hospital.

A new administration block will also be set up.

Spread over 25 acres at the foot of the Margalla Hills, the zoo lacks adequate shelter for its inmates.

A pair of lions, which are the main attraction at the zoo, are being kept apart to keep them from mating while Kavaan, the lone elephant, has been living alone since his partner Saheli died in 2012. His living quarters are also small and inadequate for such a large animal. He only has a three-walled structure to take shelter under in the harsh summer months.

“The conditions under which the lions and elephant are being kept are deplorable. We are visiting the zoo for the first time and are very disappointed,” said Rafique Butt, who was visiting with his family from Sialkot.

Public facilities in Islamabad should be a model for the provinces, he said.

Many of the enclosures at the zoo are dirty and the water in the ponds for ducks and turtles is grimy. The pond for the pelicans is empty because the staff do not refill it.

The zoo has only one veterinary doctor who is also a deputy director and focuses more on that job.

Before the formation of the local government, the zoo was under the administrative control of the Capital Development Authority (CDA) and now falls under the jurisdiction of the Metropolitan Corporation Islamabad (MCI).

However, much like the CDA, the MCI is also yet to make any changes in the zoo despite making several such announcements in the first few months of its formation.

Meanwhile, commercial activities have been increased in the zoo, with many new stalls set up recently after the formation of the local government. Some zoo officials say a general councillor is behind the establishment of the new stalls.

The zoo employs some 120 people many of whom do not take an interest in their duties due to labor union engagements. Some officials also claim that many of these employees have also set up stalls at the facility.

The insensitivity to the pain of others in this country is simply astounding; just as troubling is our acquiescence in a culture of violence that has claimed many victims, man and beast. While there are several safeguards — whether or not they are effective is another story — aimed at protecting human life, when it comes to the animal kingdom, we seem to be bereft of all humane values. Take the case of government-run zoos where this lack of compassion can truly be witnessed. Here, the animals languish until death, often untimely, overtakes them. This week, the bear at Islamabad’s Marghazar Zoo died. Over the last couple of years, the facility, run by the Municipal Corporation Islamabad, has lost 15 animals including lion cubs, nilgai, zebras and an ostrich. The zoo management claimed that they died natural deaths; in the case of the bear, the city’s chief metropolitan officer quoted a postmortem report that identified an intestinal tumour. The level of the zoo’s disinterest in its charges can easily be gauged: the bear lived alone in a small enclosure, the elephant Kavaan has been without a mate for six years and is housed in an inadequate shelter, and the ponds for water-loving birds are dirty and full of algae. There is a vet, but he is also the deputy director of the zoo and is reportedly more focused on that job.

Yet why single out the zoo in Islamabad? Peshawar Zoo, inaugurated in February, subsequently saw a string of deaths, most of which the administration shrugged away as ‘natural’ deaths — even though its snow leopard died in an enclosure with no air-conditioning on a day when temperatures hit 26°C, and a monkey was killed by a wolf placed right next to the simians’ cage. Lahore Zoo’s elephant Suzi died at the untimely age of 30, while Karachi Zoo’s losses are similarly high. If this is the level of suffering in Pakistani zoos, it would be best to shut down such shameful facilities altogether.

One thought on “Another Bear Death in the Islamabad Zoo”