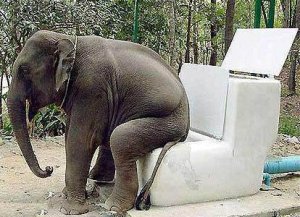 Twenty five years ago I wrote a quiz book called Wise and Wonderful published by Rupa. The idea was to get people familiar with the millions of wonderful things animals could do. So many years later I continue to be fascinated by their abilities.

Human beings are all the same. The same three or four colors and shades between. The same bodies and organs, the same actions and reactions.

Animals on the other hand are so exciting. Hundreds of colors, so many types of bodies, so many super powers. Hairy frogs break their bones and push them out through their toes to make claws. The “hair” are actually external gills full of arteries. The frog can make its own retractable claws by breaking his toe-bones and jabbing them through his skin. Apparently the claws later retract passively, while the damaged tissue is regenerated.

Pit vipers, as well as some pythons and boas, can sense the body heat of their prey from several feet away. Small pit organs on the snakes’ faces detect infrared radiation. Nerves connect the pit organs to the brain’s somato sensory system, which processes the sense of touch, allowing them to create a thermal profile of a nearby mouse for example.

Whereas we humans have only three color-receptive cones in our eyes — for red, blue, and green — the mantis shrimp has a set of 16! This little crustacean can see dozens of colors we have no name for, which perhaps explains why the shrimp itself is decked out in such radiant hues.

Pistol shrimp has a claw that snaps shut so quickly it creates a cavitation bubble almost as hot as the surface of the sun. When it collapses, the bang can reach 218 decibels. Dragon millipedes can shoot cyanide at their predators. When threatened, sea cucumbers have a whole range of defense mechanisms. Some discharge sticky threads, others shoot vital organs out of their behinds at the enemy and escape (the organs quickly regenerate). But the best way to escape is to go in hiding, and sea cucumbers can almost liquefy their bodies, shape-shifting themselves into tiny spaces, and evade predators by ejecting their guts out of their rear ends.

Dung beetles can pull over 1,000 times their body weight. We have difficulty picking up even one tenth of our own weight. Geckos can walk up windows, thanks to electrostatic forces between thousands of tiny hairs on their feet and the surface. Every square millimetre of a geckos footpads contains 14,000 tiny hairs, each of which branches into around 500 little tiny spatulae so small that they are below the wavelength of visible light. Using these invisible, atomic micro-micro-microfibers, geckos are able to stick to almost every known surface. The grip is so strong that if a gecko used all of its gripping power at once, it could hold aloft 130 kg.

Lyrebirds can imitate any sound they hear, including camera shutters, chainsaws, and car alarms. The horned lizard can shoot blood from its eyes. Froghoppers are leaf sucking insects which defend themselves by frothing at the mouth and bleeding stinky goop out of their abdomens.

They are the most spectacular jumpers in the entire world. They can leap about the same distance as fleas (200 times their body length.) Their explosive power comes from a coil of energy-storing protein that acts somewhat like a spring. Located in the flea’s thorax, the spring transfers energy down through the flea’s legs, until it reaches and compresses the bug’s toes. This propels the flea to jump in one bound, but its performance is much more impressive given that it is 60 times heavier. The froghopper’s initial speed is about 4 meters/ second, which exposes the garden bug to over 400 gs of acceleration! They’ve also evolved a fake head on their rear ends to fool predators.

Bacteria have the most amazing abilities – if we had to look for smart aliens visiting earth, they would probably come in the form of bacteria. Are human beings the dominant life forms of the Earth or are bacteria? Each species has its own incredible abilities, but the terrifying “thought control” talents of the Toxoplasma gondii protozoa are amazing. It commonly infects rats and then alters their brains so that the rodent host seeks out its natural predator, cats. This is because T. gondii can only complete its reproductive cycle in feline intestines. So the rat offers himself to be eaten, or gets eaten, and the T. gondii parasites complete their lives. This protozoa also infects humans and I wonder how much of our activities come from their orders.

The Mulu Flying frog, whose males grow to just 3.5cm, has bright green skin at night but changes colour to display a brown hue during the day. Its eyes follow suit to change colour as well. And while the minute animal may not fly with the birds, it uses its webbed feet and aerodynamic flaps of skin on the arms and legs to glide from tree to tree.

Silver ants in the Sahara Desert are covered by a silvery sheen of body hair that acts as a wearable sun shield for the creatures. The silvery hairs completely reflect the light like mirrors, preventing the ants from absorbing heat. So they stay cool when temperatures in the arid region reach 50 degrees Celsius.

Limpets are small, sturdy aquatic snails with spiky tongues. This also acts as a hammer and makes dents in rocky surfaces which the limpet can inhabit. (Imagine using your tongue like a hammer.) The limpet’s teeth are the strongest biological material known to man and they allow the limpet to constantly chew rocks without any damage. Tardigrades, also known as water bears or moss piglets, are water-dwelling, eight-legged, segmented micro-animals which, under a microscope, look like little bears. They thrive in any kind of extreme environments – freezing temperatures as low as -200 C (-328 F), scorching temperatures up to 150 C (302 F), outer space, no food or water for over a century, ionizing radiation up to 570,000 roentgens (a dose of just 500 roentgens would kill you), solar radiation, gamma radiation, ultraviolet radiation, high salinity and lack of oxygen.

The loudest animal on Earth, relative to its body size, is the water boatman, an aquatic insect found in fresh or brackish water throughout the world that paddles along the water surface with oar-like hind legs. Singing songs of love from its perch on a river bottom, a male boatman can be as loud as an orchestra. Their resulting melodies can reach 100 decibels and can be heard through the water by people walking along the riverbank.