I have a vegetable garden. The monkeys take my brinjals, the parakeets take the chillies, the moles take the cauliflower, leaf curl gets my tomatoes, and squirrels come for some seeds. I get the mint, dhaniya and the different saags. But over the last one year I have been dealing with different ways in which to get a more equitable share of the vegetables, and some of these work. For instance, we discovered that monkeys only eat the round brinjals so now we plant only the long ones. (However, the probable truth is, that we feed the monkeys every morning with two chappatis and a banana and then they go away)

You can keep animals out of your farm and garden without resorting to traps, guns and poisons. Let’s start with the farm first. I had written about this earlier but here are some more ideas :

Farmers in Tamil Nadu use second-hand fishnets as fences. They are not expensive, look like metal and so deter both boar and gaur. They buy the fishnets in Gudalur for Rs.80 a kg. Monkeys stay away because they are scared of being caught in the net.

Burning dung with half a kilo of chillies is being done by farmers in Himachal Pradesh, who have found the method effective in keeping away wild boar. Demonstrations in Odisha, Karnataka and Chhattisgarh shows it works even better in keeping away elephants. The simplest method consists of planting a wide row of chilli peppers around cultivated fields and gardens.

However, according to all scientists, animals, especially deer /gaur etc. only come into the farms during the dry season. If the farmers dug water holes in the forests and planted fruit/berry trees and bushes they would not come out at all.

In Benares, fences are being made with reels of audiotape that are wrapped round bamboo stands. Other farmers use reflective ribbons.

Here are the garden ideas:

Vegetables should be planted on raised beds. Small animals, like squirrels, moles, rats, are reluctant to get on to raised beds as they avoid areas that make them visible. Make the paths between the beds very narrow so that they feel they cannot hide there.

Coffee grounds add nitrogen to the soil and keep slugs and snails away. It is also good as a base when you grow radishes, peppers, potatoes. Soak a couple of packets of chewing tobacco in a bucket full of water.

Let this sit overnight and next day spray it all over the garden. The snails run. Mint, sage, parsley and lemon balm will also keep slugs and snails away; and so will small bunches of human hair kept in different places in the garden. Dog and cat hair will also do.

Corn can be protected by interplanting pumpkins or gourds and cucumbers.

Aphids are small insects that suck the sap from plants, resulting in leaf curl or yellowing. They feed in clusters on new plant growth. Neem oil should be sprayed onto plants infested with aphids. Place aluminium foil at the base of your plants. The foil reflects light onto the undersides of the leaves, which scares away aphids. Sunflowers are hardy and a trap crop for aphids and other pests.

Neem oil also controls funguses. A solution of several teaspoons of Baking Soda dissolved in water can help prevent and treat fungus and powdery mildew on plants. Use as a preventative and acute treatment as needed. Chilly plants that are showing leaf curl should be sprayed with diluted curd or buttermilk.

Growing garlic and onions in between aphid-prone plants is another way to keep them away. Or bring in ladybirds who are natural aphid eaters. Growing coriander and marigold attracts ladybirds. In fact interplanting any of these, and chives and lavender, keeps most animals at bay.

It’s difficult to detect rats or to get rid of them. I just notice those huge holes in the vegetable patches and my heart sinks.

But lavender, marigold and mint keep them away as they really hate these. In fact if you spray peppermint oil, or soak cotton in it and put it all over the garden, they will stay away.

Squirrels like freshly planted seedbeds. They also like beans, cucumbers and eggplants. To keep them away, mix 1/3 cup flower, 2 tablespoons red chilli powder and two tablespoons powdered mustard and sprinkle around the garden. If you want to spray it, add 4 cups of water and some vinegar.

Even just sprinkling vegetables with pepper will deter monkeys from eating them.

Using mulch, which includes straw and small bits of wood bark, between the vegetables not just regulates the soil temperature but it deters animals who don’t like walking over it.

Place a few stout sticks near the vegetables you want protected from monkeys. They have an aversion to sticks (as we all do).

Make sealed small packets with boneless dry fish pieces and keep around the field. After opening the packets monkeys rub the fish with both hands. They hate the smell and constantly rub their hands on rocks till they bleed. They don’t come back after that.

Adilabad farmers use colour and sound.  They use cheap coloured saris to fence fields, and empty liquor bottles and large tin cans to create unnatural sounds that spook the fauna. 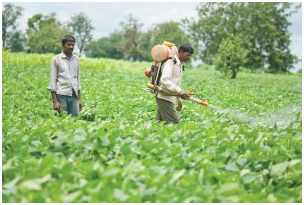 Killing Of Animals That Destroy Crops Can Not Be Justified

I have never seen a wild boar. I see Nilgais sometimes, magnificent tall blue-grey creatures, in small herds on the edges of small copses. Both these animals are used as bogeys. They are supposed to be destroying all the crops. They are the main reasons for our lack of food etc. Some politicians go up and down ministries trying to get governments to order these animals to be killed in the name of farmers’ demands. Some state governments have obliged. In fact our Environment Minister was so eager to be “compassionate” to farmers that he wrote a hasty, unthinking letter to the state governments asking them to list all the animals and birds – including elephants and blackbucks – who should be shot, for the good of farmers. Thankfully wiser sense in the states prevailed and he got no answers and a barrage of criticism from the media.

I am bemused by these so called demands through the mouths of politicians. Even when some state governments allow the nilgai and the wild boar to be killed, they are never shot by their supposed victims, the suffering crop growers. They are killed by tourists who pay for the sport of killing wild boar. They are killed by the rich, illegal hunting ex-maharaja types, the lafanga children of property dealers who like dog fighting and making bonfires at night where they drink , roast and eat the meat of wild boar. They are killed as sport by the same people who go on secret weekend killing trips like the Nawab of Pataudi who used to chase blackbuck, shoot at their legs and then slit the throat of the wounded animals. His son Saif Ali Khan was caught doing the same thing. Recently there was a picture in the newspaper of an MLA standing proudly by the dead body of a beautiful nilgai, claiming that he had shot her as social service. It drew nothing but outrage from his own farmers.

So, let me say here , that I simply don’t believe that farmers want either the boar or the nilgai killed. This is simply a convenient excuse for hunters to be able to carry on their dastardly sport. However, there should be a way to keep nilgai and other wild animals, who are being driven out of their forests by the forest department repeatedly setting the undergrowth on fire during January/February in order to hide their own cutting of trees, out of the fields. Recently the Madhya Pradesh Forest Department had a seminar on how to manage / minimize crop damage by wild animals. The professional hunters, retired wildlife bureaucrats and the local DFOs, of course demanded killing. Strangely a number of “nawabs” attended the conference (one of them is the “ chief killing officer, Government of Bihar) and predictably wanted slaughter.

But the villagers and the wildlife activists, who attended, had so many interesting suggestions based on their traditional knowledge that I thought you might like to hear them and perhaps pass them on :

1) Milk thistle (Silbum marianum) not eaten by animals, and of high medicinal value, can be sold for a lot of money every few months.

2) Guggal : almost extinct in India but can be brought in from Pakistan. Makes good fences against animals and can be sold in a few years for medicine.

3) Sagargora / Bagad / Gataran / Nirgundi are thorny medicinal plants which form impenetrable barriers on the edges of farmland. The thorns are so dense that birds cannot pass through and there is a high demand for them medicinally. Other plants are opuntia, thuar, rambans, prosopis, ratanjot, castor. Other suggestions were barbed wire meshing, chain link fencing, mildly electrified fences, trenches, digging pits. These have been tried – especially in Haryana and Orissa – and have led to the killing of large numbers of animals.

It is amazing that no agricultural university scientists have been involved in finding solutions. There is no mention of crop damage by animals in the National Agricultural Policy. No traditional knowledge has been used or even asked for. And there is a complete lack of data of the actual loss of crops due to wildlife. Of course, the only permanent way is to rejuvenate the degraded small forests and to stop people from cutting trees illegally and burning them. Also, to forbid the forest department from setting any fires and suspend any local DFO in whose areas fires break out. Each agricultural area has to be told to plant at least 5 lakh trees a year, adjoining and in the middle of existing copses. Only then will the animals stay in their designated areas and leave us in ours. If we do not nurture the traditional tolerance of the farmer communities towards wildlife there is little that we city dwellers can do to protect any animals.