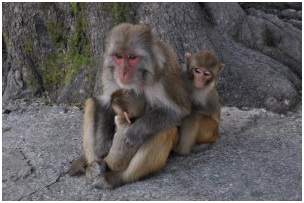 Veterinary doctors who should have their licences taken away combined their brains with those of forest officers and decided that the only way to get rid of the “monkey menace”  was to sterilize the monkeys as well. Unfortunately, this is the worst possible decision. Dogs are more or less solitary. Monkeys live, like humans, in large extended families. If you trap a single monkey, then two things happen: the family rushes away from their own territory/area. They get angry with humans.

So they enter areas that they are unfamiliar with, because now they are too scared to go back to an area where their relative was trapped. Now they enter people’s homes and fields in search of new larders and in the process hurt humans and themselves and destroy crops. The single monkey that has been captured usually breaks a limb during this hideous capturing process (Himachal Pradesh pays Rs.500 to anyone who captures a monkey) and is sterilized while in terrible pain. He / she usually dies (the mortality of Himachal’s monkeys by the so called vets is unbelievably high). If he/she survives, it is left at the place where it was picked up. But by then the family has disappeared and the troupe replacing them will not accept this poor animal. So, to survive, he enters human homes and becomes predatory. Sterilization in monkeys has resulted in the opposite of what happens in dogs. It has no impact at all on the population of monkeys: that is in any case reducing drastically because of poisoning, shooting and other illegal ways: from 85 lakhs in the 80s they are now a mere 5 lakhs in the whole of India. The difference is that they are sharing space with humans.

Why do we have this problem in Himachal and Uttarakhand? Because the Government of India pays money every year to the state forest departments to set fire to the edges of forests. The logic is that if trenches are dug and the leaves in them set on fire then the forest will not catch fire during the dry season. But the forest ranger sees this as bonus money. He doesn’t dig trenches, he doesn’t map vulnerable forest ranges. He simply cuts a large number of trees illegally and then sets fire to the forest to hide his criminal activity. The fire eats the underbrush, the new trees, berries, vines, soft grasses, new shoots which are the food of wild boar, monkeys, deer, nilgai and other grass eaters every January/February – and so the hungry animals come out. I have urged time and again that if this nonsense is stopped the monkeys will retreat from human habitations almost immediately.

Secondly, we must start planting Indian fruit and berry trees in the middle of forests so that animals remain there. But the forest department refuses to stop the firelines as it will stop the large amount of “pocket money” that the centre gives to each forest ranger.