The world’s obsession with eating meat is one of the single biggest issues of our time.

If you’re still eating meat, read these stories and see if your change your mind:

When a truck transporting hundreds of piglets to a fattening farm overturned, 16 of them were lucky enough to be rescued and given a chance of freedom at different animal rescue sanctuaries across Spain. Seeing the pigs enjoying their new lives, it’s hard to believe that they could have ended up on someone’s plate.

The WHO finally came out and said what many scientists and medical professionals have been saying for years: There is a direct link between meat consumption and cancer.

If you still think of lamb as a food item, you clearly haven’t seen Zachary lamb enjoying time with his mom. These videos show a rare glimpse into the lives of these beautiful and loving animals, who would have ended up being sent to the slaughterhouse if they had not been rescued by a sanctuary.

The consequences of our desire to consume meat are far reaching, and one thing that is almost never considered is the effect the ever expanding animal agriculture is having on nature. Important natural habitats are being turned into farmland to house or feed livestock animals, and this is killing endangered animals.

Psychologists have uncovered a telling set of statistics to show the relationship between the excuses people give for eating meat, and what this shows about their attitude towards animals and the world around them. We hear the same old excuses time and again, and it’s due to deep set stories that we keep telling ourselves.

As if taking the life of another being wasn’t bad enough, it turns out that 40 percent of meat that is sold in the U.S. ends up in the trash, and to top it all off, it’s incredibly bad for the environment. That’s an unfathomable amount of lives just being thrown away when you consider that billions of animals are killed for food every year.

Even the most ardent meat fans tend to turn a blind eye to the slaughter process. It’s not something that anyone wants to look into in any great depth. But it begs the question, would you still want to eat the meat if you knew exactly how it was killed?

It has been well-documented that the animal agriculture industry is among the worst polluting in the world. With an ever increasing population, there is simply no way that the farm industry can continue to operate in the way that it is, and here are 10 very good reasons why. 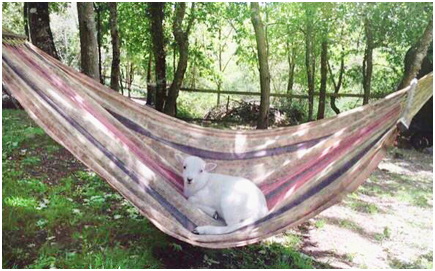 How differently would you view the meat on your plate if you knew that these innocent beings love to do all the things your cat and dog do? Pichu was rescued at just 4-days-old and has grown up in the loving care of Mino Valley Farm Sanctuary, and it turns out that, when given the chance, lambs love chilling out in hammocks.

One of the most common excuses given for not giving up meat is that it’s essential for a healthy diet. This is simply not true, and here are some great examples of what you can eat instead of meat. Transitioning away from eating meat has never been easier, so there really is no excuse to choose to take the life of an animal.

Having discovered so many different reasons why the consumption of meat is both unethical and unnecessary, it’s time to confront the reality that there is a more compassionate way to live. If you’re unconvinced, you obviously didn’t take the time to read these 10 stories!
Read more: http://www.care2.com/causes/10-stories-that-will-make-you-think-differently-about-eating-meat.html#ixzz3qR8CgKPK

Are Humans Biologically Carnivores: Evidences do not suggest so

Why are we so sick? Why are 40% of the planet’s humans obese, which is an allergic reaction of the body?

Why are so many millions getting cancer?

What have we done so terribly wrong?

Why is it considered normal to be ill?

Why are the largest selling drugs in the world digestives and anti-allergens?

Could it be that our food is entirely inappropriate? Something that tastes good to a perverted body need not necessarily be good – white sugar, for instance.

For centuries man has been encouraged to eat meat by anthropologists and then by dieticians on the basis that he is an omnivore – an assumption based purely on the fact that we have canine teeth.

But what does the evidence actually show? I have taken my arguments from a brilliantly erudite article by Michael Bluejay.

Here is a chart made by Dr Milton Mills which explains the human anatomy:

The only way to come to the conclusion that we are not exclusively plant eaters is to ignore the anatomical evidence. Regarding our canines – even chimpanzees, our closest relatives, have large ones. And they are 99% vegetarian; 1% eat not meat, but termites.

Our canines, which are not sharp or pointed but short blunt and slightly rounded, have evolved to process starch, fruit and vegetables, not to tear flesh (which is why meat has to be boiled till it is soft and edible). Have you ever seen someone eat meat with his corner teeth, the canines? Horses and hippos have canines as well. They are exclusively plant eaters.

Most plant eaters eat small amounts of non-plant food like insects – that does not make them omnivores. If chimps are considered omnivores, because of the 1% addition of insects, then we are the same – not the omnivores who eat 50% meat and the rest plants / cereals.

Cats are carnivores. But they eat a lot of plant food, and some people even keep them as purely vegetarian. Does that make them even omnivores – no scientist would agree.

Then comes the B 12 argument. “B 12 is not found in plants. Humans must have B 12. Ergo humans must be meat eaters.” The truth is that B 12 is not made by animals. It is a bacteria. It is found in animal foods because meat has so many bacteria in it. Unwashed plants also have bacteria. Lakes have B 12 – before water is sanitized.

All human faeces has B 12 in it. Fermented soya has it. Getting B 12 is easy. So the idea that humans eat meat because of a single vitamin made from bacteria in the soil is not sensible. In any case, both meat eaters and vegetarians lose the ability to absorb it as they age and so both are advised to take B 12 supplements.

Let us use the tired and disputed argument that our ancestor the caveman was prehistorically a meat eater.  All animal are programmed to know what their ideal food is. Humans are not.

They act through ideas rather than instinct. We learn our behaviour. And we make choices every day that are contrary to our own health.  If our ancestors ate meat, they were making choices as humans do rather than acting on instinct. You should eat meat because a caveman ate it? What other major decision of your life would you put into the hands of this caveman?

The best evidence is not some supposed historical diet but our own bodies. If our ancestors were such huge meat eaters then our bodies would have evolved over the millennia to adjust; longer teeth, shorter intestines, more acid in our PH? But we have not evolved over 30 million years.

Could it be because our ancestors were vegetarian? The world’s foremost expert on the relationship between diet and disease, Dr John A McDougall, certainly thinks so.

Biologist Robert Dunn, writing in Scientific American, says: “The majority of food consumed by primates today- and every indication is for the last thirty million years – is vegetable not animal. Plants are what our apex and even earlier ancestors ate: they were our paleo diet for most of the last thirty million years during which our bodies and guts in particular were evolving.”

I have tried explaining simple anatomy to meat eaters. The first reaction is “I don’t want to know. I like eating meat”. It is human nature to want to do what is right and logical. But when we are confronted with evidence that makes a belief wrong, we are uncomfortable with both the evidence and the messenger.

So we try and ridicule both to begin with – see all the jokes on vegetarians and specially vegans – and then we argue angrily on the basis of half-baked information and finally we  outlaw it ( Canada has had to pass a law making vegetarianism a right!) on the grounds that it threatens an industry. When the human searches his mind to sidestep any uncomfortable overwhelming evidence, seeing it as a challenge instead of dealing with it reasonably, psychologists have a name for it: cognitive dissonance. Do you suffer from this?