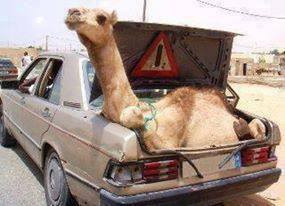 A large number of people enjoyed the camel wrestling fair in Layyah at New Stadium.

Choubara, the desert tehsil of Layyah, is known for camels.

An annual camel fair has been held at Inayat Shah Darbar since centuries where wrestling, dancing and sale of thousands of camels are held.

This event is said to be the biggest camel trade fair in the sub-continent.

Since 1973, annual camel wrestling fair has been held in Layyah where top camels show their wrestling skills. The losing animal is knocked out or run from the arena.

On Sunday, as many as eight pairs wrestled and the final winner was “chirka” from Jalalpur Peerwala that defeated “malangi” of Layyah.

The wrestling camels are decorated with silver ornaments and beautifully knitted scarves with sharp coloured threads.

The owners of the winner bring the camel out of the arena while dancing on drumbeat.

“Today my camel ‘bhola’ won and ‘malangi’ was the loser. I feed the wrestling camels honey, milk, ‘desi ghee’ along with dried fruits to make them strong.”

2 thoughts on “Camel Wrestling in Layyah”