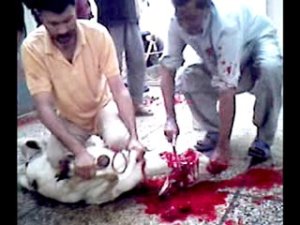 Islam has advocated for animal rights since its inception, some 1400 years ago. Unfortunately, few today remember what it says.

Eid al Fitr is over and  is right around the corner. Muslims across the world  sacrifice animals over Eid al Adha, commemorating Prophet Ibrahim’s willingness to sacrifice his son in the path of Allah. While the Muslims slaughter hundreds of thousands of animals to mark the occasion, most of them forget another significant lesson of the story:

While the festival enjoins us to offer animal sacrifice in the path of Allah, it also reminds us that animals too are living creatures like us, who are loved by Allah and whom we must also love and care for. After all, it won’t be much of a sacrifice if we didn’t love the animals in the first place. Islam means ‘acquiring peace by submitting your will to God.’ If that is the case, animals must be the best Muslims as they follow the law of God better than most human beings.

There are broadly two types of living creatures in Islam: human beings and non-human beings. The Quran says that if anyone kills an innocent human being, it is equivalent to killing the whole humanity. As far as non-human beings are concerned, no human being should harm them unnecessarily or kill them for sports, target practice or for fun. They may be used for the benefit of human beings, but never in excess.

A Muslim can be a very good practicing Muslim even by being a pure vegetarian. Islam neither makes it compulsory nor does it encourage human beings to consume non-vegetarian food. “Eat of the good lawful things wherewith We have provided you, and commit no transgression or oppression therein, lest My anger should justly descend on you,” says the Quran (20:81).

It repeats in several instances that Allah loves not those who create mischief “by destroying the crops and the cattle.” Animals are sentient beings and Allah has created them to live in communities. Allah says that all creatures are like family to Him and they have their own ways of communicating with each other and worshipping the Almighty. “There is not an animal that lives on Earth nor a being that flies on its wings, but forms part of communities like you” (Quran 6:38). Prophet Muhammad (PBUH) once said, “All creatures are like a family (Ayal) of God and He loves the most, those who are the most beneficent to His family.”

The Prophet also said there is no distinction between humans and animals as far as cause and effect are concerned, “A good deed done to an animal is as meritorious as a good deed done to a human being, while an act of cruelty to an animal is as bad as an act of cruelty to a human being.” He also said, “whoever is kind to the creatures of God is kind to himself.”

Although killing certain animals to eat them is allowed the Prophet said, “Do not allow your stomachs to become graveyards.” What this means is that humans should not commit excess nor should we transgress and oppress any living creature, especially animals, because they are also a part of God, just like we are part of Him.

Islam has placed the killing of animals without a justifiable reason as one of the major sins in Islam, “Avoid the seven obnoxious things {deadly sins}: polytheism; magic; the killing of breathing beings! Which God has forbidden except for rightful reason.” (Sahih Muslim: Kitab-ul-Imam (Ref. No. 46); Chapter. XXXIX, Vol.I; p. 52. Bukhari, 4:23.) According to the spirit and overall teachings of Islam, causing unavoidable pain and suffering to innocent creatures of God is unjustifiable under any circumstance. Prevention of physical cruelty is not enough, mental cruelty is equally important, if not more important.

“We were on a journey with the Apostle of God, and he left us for a while. During his absence, we saw a bird called hummara with its two young and took the young ones. The mother bird was circling above us in the air, beating its wings in grief, when the Prophet came back and said: ‘who has hurt the feelings of this bird by taking its young? Return them to her.’ (Narrated by Abdul Rahman bin Abdullah bin Mas’ud. Muslim. Also Awn (Ref. No. 32) Hadith No. 2658.)” One of the sayings of the Holy Prophet Muhammad tells us: “If you must kill, kill without torture.” He also said “Do not be hasty with a ‘being’.”

Some 1400 years ago, during the age of ignorance, people were treated like animals and the Prophet Mohammed advocated for animal rights. During the pre-Islamic era, certain pagan superstitions involved acts of torture and cruelty to animals. When the Holy Prophet migrated to Medina from Mecca, he noticed that people would cut off camels’ humps and the fat tails of sheep. The Prophet instantly halted this barbaric practice. All such acts were condemned and stopped by the Rehmat ul Alameen (a mercy to all the worlds and to every creature).

It was not only the physical but also the emotional care of animals that was emphasized by the Holy Prophet that he once reprimanded his wife, Aisha, for treating a camel a bit offhandedly. The Holy Prophet himself was once reprimanded by God for neglecting his horse, as the following Hadith tells us: “The Prophet was seen wiping the face of his horse with his gown (jullabiyah). When asked why he was doing that, he replied, ‘Last night I had a reprimand from Allah regarding my horse for having neglected him.’

We must always strive towards perfection. Being perfect is not an end in and of itself but striving towards achieving it is should be the ultimate goal.

Aiman Reyaz is a regular columnist for the Islamic  website, Newageislam.com