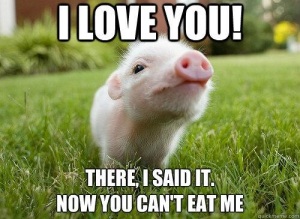 While driving in Islamabad, one has be on the lookout for the hordes of wild boars that are freely roaming the roads and greenbelts. They are the most active at night.

Where have all these boars come from? Most reside and nest in the nearby Margalla National Park, hiding in the thick undergrowth during the day.

Their numbers have proliferated in recent years because of the regular supply of free food in the form of garbage skips. “They are omnivores and eat anything – they are experts of garbage in the animal kingdom”, explains Richard Garstang, conservation adviser with WWF-Pakistan who resides in Islamabad near the park. “Normally in the wild, a female would have up to four piglets, but given the broad spectrum of garbage available to them in the city throughout the seasons, the female will now have eight piglets”.

The natural predator of the wild boar, the common leopard, has also disappeared from the area given the encroachment of its habitat by villagers.

The protected Margalla National Park covers only around 17 square kilometer and can sustain just one leopard at a time, since they tend to be extremely territorial and need more room in which to roam and hunt. In recent years, one could not find traces of a single leopard in the park.

Officials from WWF-Pakistan say that it is difficult to estimate the total population of wild boars in the capital since no survey has been conducted; it would be safe to say that they are probably in their thousands. Aside from garbage, wild boars eat crops as well and have an excellent nose, which they use to dig for insects. They can easily dig under fences and that explains their mysterious appearance in the grounds of the heavily barricaded Presidency. “They use their snouts as a shovel to dig,” explains Garstang. “They can get around most fences”.

However, their biggest danger appears to be vehicles, especially at night. “They tend to run across the roads in single file. They have poor road sense and can cause considerable damage to cars”.

Wild boars have massive lower canines and razor sharp teeth”. They can easily kill dogs and that probably explains the absence of stray dogs in the capital.

Sporadic poisoning is too indiscriminate and a horrible way to control their population. Garstang advises instead of getting to the root of the problem. “It is actually the rag pickers who throw out the biodegradable garbage from the containers onto the roads where the wild boars can access it. The wild boars also tend to hide and feed in the dirty nullahs and streams where people dump their garbage”. Control Islamabads garbage and you can curtail the growth of wild boars, he added.

Each night, packs of the hairy beasts emerge from Islamabad’s river beds, parks and scrubland to rifle through the overflowing rubbish bins of its mostly wealthy residents and growing number of restaurants.

City authorities are laying poison and have announced free hunting permits to cull the wild pigs’ numbers. But to make sure residents don’t get caught in the crossfire, they only allow shotguns. The animals can weigh up to 180 to 220 pounds (80 kilograms to 100 kilograms) and have razor sharp teeth. Adult males come armed with upward curving tusks. While they scurry off at the site of humans, they charge when cornered, alarmed or wounded and are a major cause of traffic accidents in the city.

A team has been dispatched to lay poison mixed with molasses or maize, said Malik Aulya Khan, the city’s environmental chief. ”We are making special efforts. We have killed many with poison,” he said. 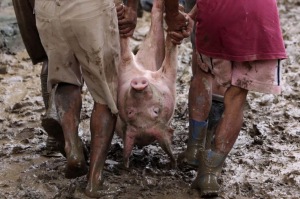 Wild boars are found all over Pakistan, and are one of its major agricultural pests, gobbling their way though millions of dollars of wheat and sugarcane crops. In Punjab province in the 1980s, the government initiated a bounty system whereby villagers were paid for each tail they delivered, but it was discontinued for lack of funds.

Islamabad was built from scratch in 1951 on scrubland that runs up against the Margalla Hills, meaning wild boars have always lived in or close to the city. But their numbers have grown along with the city and its human inhabitants, now around 800,000 from just 100,000 originally.

The meat of wild boar is prized in many countries, but has no value in Pakistan because its consumption is forbidden under Islam.

The country’s often persecuted and tiny Christian and Hindu populations don’t keep pigs or eat wild boar either. That has helped ensure the animals thrive.

Professor Rashid Ahmad Khan trapped and killed more than 1,700 pigs during three years of research into the problem in the 1980s. He said that poisoning and hunting were both unsuitable methods of controlling the population, and instead advocates removing their habitat. Cutting down brush in which they hide during the day, fencing off the many streams that crisscross the city and better management of the trash that spills out of rubbish bins and around the back of restaurants in the city will help reduce their numbers. ”If we are not doing this, it will be impossible to weed out the animals,” he said. ”They are flourishing.”

The CDA has kicked off a poison-baiting campaign to reduce the number of wild boar in the capital. The campaign has been launched with the collaboration of the National Agricultural Research Council (NARC) and will continue for a month. Under the drive, poisoned grains are being spread at specified places near the main hideouts of the wild boars. The authority has warned the cattle breeders and the farm owners not to graze their cattle for at least a month. A senior official of the environment directorate of CDA said that the drive was started on the complaints of the people about the increasing number of wild boars in the city.

The official said the authority had conducted a survey prior to launching the campaign. He said the F-9 Park, Margalla Hills, Shakarparian, vicinity of Zero Point, Kashmir Highway, H-8 Graveyard and F-6/3 woods were some of the main hideouts of the wild boars. He said shooting was another means to reduce their number, but the authority could not do this on mass scale, as it would not only spoil the peace of the city but also spread a wave of fear among the people.