After around a year, the only elephant of the Islamabad Zoo ‘Kavaan’ on Feb 20, 2013 was unchained by the Mahout (elephant trainer).

Kavaan spent two hours in a pond especially built for it. Visitors took photographs and enjoyed watching the animal bathe in the pond.

As Kavaan settles down into the new habitat, CDA is planning to request Sri Lanka to donate another female elephant to the Zoo.

The previous female elephant that died under dubious circumstances was also donated by Sri Lanka in 2012. 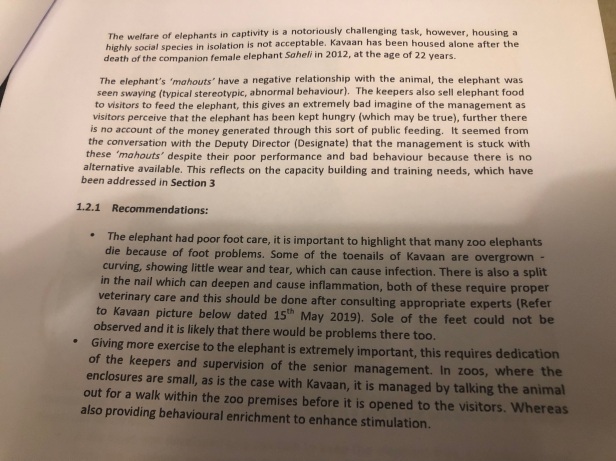 Children and residents of the twin cities who had come for entertainment, gathered around the enclosure of the elephant and watched as it played in the water. Children fed apples and grass to the elephant and some even touched it.

It is worth mentioning that the female elephant named Saheli died on May 1, 2012, after suffering severe pain in one of its legs for about two weeks.

It was only 22 years old, however, life of an average elephant is 70 years and they even live up to 100 years.

“Head Mahout of the elephant Mohammad Bilal who was suspended after the death of the female elephant, was given the task to unchain the elephant and bring it to the pond by January 2013 and he did it within one and half months.

Mahout Bilal said that member environment CDA Dr Kazim Niaz had given him the task to unchain the elephant.

“It took over a month to normalise the elephant and in the end, the elephant started listening to me and now it has been following my instructions,” he said.

Member Environment CDA Dr Kazim Niaz said that that the management was facing problems but up-gradation of the zoo was underway.

“Unchaining the elephant is a great achievement. Next week we will repeat the exercise, in presence of Chairman CDA. After that CDA will write a letter to Sri Lankan authorities to donate a female elephant,” he said.

“Just like the animal enclosure in sector F-8, two new enclosures for animals and birds will be opened in sector I-8 and Kalaignar Valley in the Margallas respectively,” he said.

A representative of the American pop icon Cher met with Mayor Sheikh Anser Aziz on September 19, 2017 to discuss proposals to shift Kavaan, the lone elephant at Islamabad Zoo, as well as to improve the zoo itself.

During the meeting, the Mayor and other concerned officers discussed various proposals regarding the zoo and Kavaan. The mayor told Mr Cowne that facilities for zoo animals had been upgraded, and all the animals were received much better treatment than they were a year ago.

Mr Cowne, who introduced himself as a long time friend of Cher’s, said she has formed a charitable foundation called Free The Wild, which aims to protect wild animals in captivity.

“Cher says that she believes in freedom for Kavaan, because the elephant has spent too long in a bad and damaging situation, Cher says please give the lone elephant his freedom and his dignity by setting him free,” Mr Cowne said.

Mr Cowne was told by the mayor and other officials that previous employees accused of mistreating the elephant had been removed and replaced with new individuals, who were better trained and had more expertise.

The mayor told him facilities for the elephant, including feed, the quality of his shed and medication, had been improved to significant degree. “We are continuously working to improve conditions for Kavaan,” the mayor said, adding that the international community should be satisfied that the elephant is now in safer hands.

Mr Cowne said during the meeting that the elephant, now over 30, should be freed and the civic authority should bring a pair of elephants after expanding the elephant exclosure.

In response, Capital Development Authority officials told him the authority would take the proposals into consideration, and will make a decision based on what is in Kaavan’s best interest. According to the CDA, Mr Cowne said that the improvement in the elephant’s health was encouraging.

“It is satisfying to see that conditions around Kavaan have significantly improved. Our organisation extends its full cooperation for assistance in kind of technical and professional expertise,” a CDA spokesperson quoted Mr Cowne as saying.

It was reported in Feb 2019 that the Metropolitan Corporation Islamabad (MCI) has conditionally decided to release Kavaan, if an international charity organisation provides help for upgradation of the zoo. This was announced by Chief Metropolitan Officer Syed Najaf Iqbal:

“We have decided to release Kavaan into an animal sanctuary.” He said talks between the MCI, Zoo and the international charity organisation had been going on for months. “Before releasing Kaavan, we will ask the organisation to help the MCI in upgrading the zoo.” He said a draft of MoU was received recently from the charity organisation in which the latter offered training to the zoo staff and upgradation of the zoo at a later stage. “We are examining the offer and pushing them to clearly mention their development plan. In principle, we have decided to release Kaavan,” the official said.

In November 2018, representatives of the charity organisation, Free the Wild, met Information Minister Fawad Chaudhry and officers of relevant formations, requesting them to release the lone elephant.

The organisation had offered its help in upgrading the zoo.

Later, the representatives – Marke Cowne, Gina Nelthorpe-Cowne and Anika Saleem – told a press conference that an understanding had been reached for the development of the zoo.