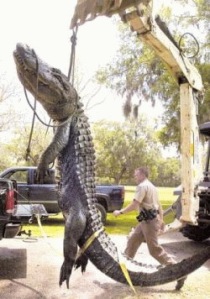 The adventures of a juvenile crocodile were cut short when villagers found it in an agricultural field in Sanghar, Sindh, in December 2012 some distance away from its habitat. They caught and released it into a lake in Makhi forest nearby.

The residents who spotted the crocodile said, a couple of dogs were barking ferociously at the unusual intruder, which fended them off with its low growl. Members of the Makhi Development Organisation (MDO), a group that aims to protect the environment, were alerted and they promptly informed the World Wide Fund for Nature Pakistan (WWF) office at Chotiari Wetlands Complex.

A WWF team then reached the spot and inspected the animal, which was healthy and free of injuries. The WWF team and MDO members released it into the protected crocodile habitat near Ghulam Hussain Leghari village. MDO’s president, Khalid Ali Leghari, said, “We believe the little animal might had strayed off too far in a canal and lost its way when trying to get back to where it came from.”

The species to which the animal belonged – the Marsh Crocodile – inhabit a huge portion of the Nara Canal and Nara desert. Umair Shahid, WWF’s natural resource management officer, said, “It is phenomenal how these amazing creatures migrate from the Nara Canal to the adjoining sand dunes in search of freshwater lakes, which are found in the complex desert system.” He added the crocodiles are often found in the lakes, where they breed. “For instance, around 12 juvenile crocodiles were spotted in January this year in Nagiopir Lake.”

The Marsh Crocodile, locally known as ‘wagu’, is found in Iran, Nepal, Sri Lanka, India and Pakistan. The species has become extinct in some countries such as Bhutan, Bangladesh and Myanmar.

In Pakistan, the Marsh crocodiles are an endangered species and may become extinct because their habitat is fast diminishing. The largest wild habitats in the country are the Nara Wetland Complex and Chotiari Wetland Complex in Sindh as well as the Hingol River in Balochistan. Around 600 crocodiles from the species live in Sindh and Balochistan. Of them, approximately 150 live in captivity.

WWF said the Marsh crocodile lays eggs during dry season, which begins in December and January.

The female lays approximately 25 to 30 eggs once a year or in some cases even up to 48 eggs. The incubation period, which starts in February, is about 55 to 75 days. What is interesting is that the temperature of the nest determines the sex of the juveniles. At 32.5 degrees Celsius the all embryos will be male while between 28 and 31 degrees, the eggs will produce females.